Sushi eater, 71, had his hand AMPUTATED after catching a bacterial infection by eating raw fish

An elderly man paid a high price for indulging in sushi when his meal ultimately ended in him losing his hand and forearm.

In a peculiar turn of events, 12 hours after the unnamed man ate the fish his left hand swelled up like a golf ball and became excruciatingly painful.

Huge blisters and bruising appeared on the South Korean man’s hand as a result of a bacterial infection caught from eating raw seafood.

Medics drained the blisters and removed the infected tissue before prescribing the man with antibiotics.

But the treatment was unsuccessful and flesh-rotting ulcers formed on his hand which became so damaged it had to be cut off.

The 71-year-old man had large blisters appear on his left hand and he developed a fever just 12 hours after eating raw seafood, then he visited a hospital two days later

The unfortunate man sought the help of doctors in Jeonju in South Korea, approximately 118 miles south of Seoul, after suffering from a fever and extreme pain in his hand for two days.

He explained the large blisters on his hand and his fever had developed just 12 hours after he had eaten seafood, according to the New England Journal of Medicine.

The blister on the palm of his hand measured 3.5cm by 4.5cm – approximately the size of a golf ball – and others spread across the back of his hand and forearm.

Doctors then diagnosed him with an infection called vibriosis caused by the Vibrio vulnificus bacteria.

And the diagnosis no doubt added insult to injury for the 71-year-old, who also had type 2 diabetes, high blood pressure, and end stage kidney disease for which he was having dialysis. 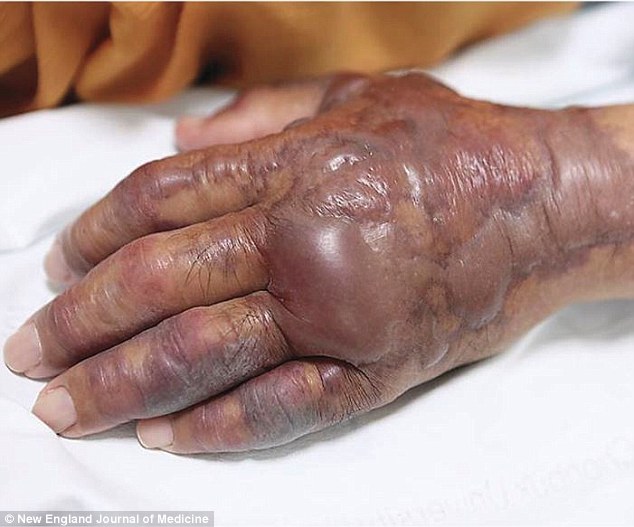 Blisters appeared along the unnamed man’s hand and forearm and, despite prompt medical treatment, he developed ulcers which rotted his flesh so badly he had to have his hand amputated

Despite medics best efforts – they operated on his hand and gave him two types of intravenous antibiotics – the man’s condition got worse again.

He developed deep ulcers on his hand which causes necrosis – the death of living tissue which can spread and cause irreparable injuries.

People with diabetes are at particular risk of complications from skin ulcers because the condition restricts the flow of blood and nutrients to the skin so it takes longer to heal – and sometimes is not able to heal at all.

Arm was amputated 25 days after eating the seafood

Some 25 days after eating the fateful meal, the man had his left hand and forearm amputated to stop the spread of rotting tissue.

Vibriosis is thought to affect around 80,000 Americans each year – one case per every 4,000 people.

Most people become infected by eating raw contaminated seafood, such as oysters or shellfish, or by exposing an existing wound to seawater containing the bacteria.

Patients with weakened immune systems – as the elderly man had because of his kidney disease – are more at risk of infection and complications.

Most healthy people can recover from being exposed to the bacteria within a few days with no serious complications.

The patient did well after the amputation surgery and was discharged home.

Jeanette LeBlanc, from Texas, died in October last year after contracting a flesh-eating bacteria on a trip to visit friends and family in Louisiana.

Ms LeBlanc got sick after going crabbing and then eating raw oysters that she and a friend picked up from a market in Westwego.

Her friend Karen Bowers told Louisiana news station KLFY that LeBlanc became sick after the two of them ate the raw oysters. 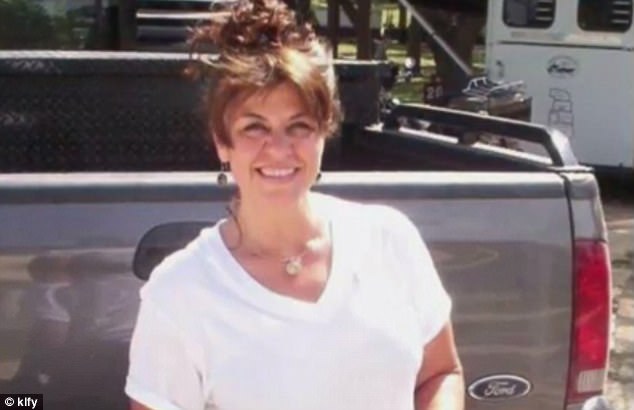 Jeanette LeBlanc, 55, died on October 15 2017 after contracting a bacterial infection on a trip to Louisiana

At first, she says it looked like her friend was having an allergic reaction.

But LeBlanc’s condition worsened in the next 48 hours and she was hospitalized and diagnosed with vibriosis.

‘It’s a flesh-eating bacteria. She had severe wounds on her legs from that bacteria,’ LeBlanc’s partner Vicki Bergquist said.

LeBlanc fought the bacteria for 21 days before dying on October 15.