This is the moment a suspected conorvirus sufferer was wheeled out of an airport in a quarantine box.

The man was loaded into the see-through pod and isolated from other travellers to prevent transmission of the deadly and highly contagious virus.

He was reportedly quarantined after medics picked up on a fever during screening  at the airport in Fuzhou, south-eastern China.

The patient was shuttled out of the terminal in the contraption – known as an transportable isolator – while flanked by staff dawning face masks.

Hazmat-clad paramedics were then waiting to help load the box into the back of an ambulance.

Chinese medics are on high alert because the virus is far more contagious than previously thought and can spread via a simple cough or sneeze. 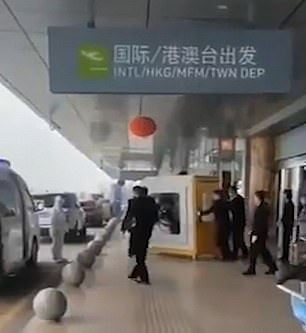 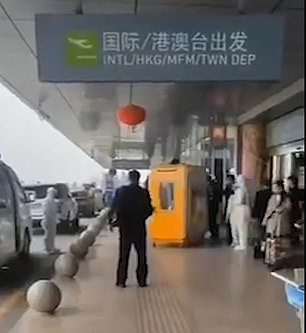 Hazmat-clad doctors were filmed transporting a coronavirus patient inside a sealed plastic tube in a bid to avoid cross-infection.

Two medical workers pulled the patient out of an ambulance in the pod and then wheeled the individual towards a hospital building.

Both clips had echoes of the Ebola outbreak in 2014, which saw an infected British nurse wrapped in a similar quarantine box while being transported between hospitals. 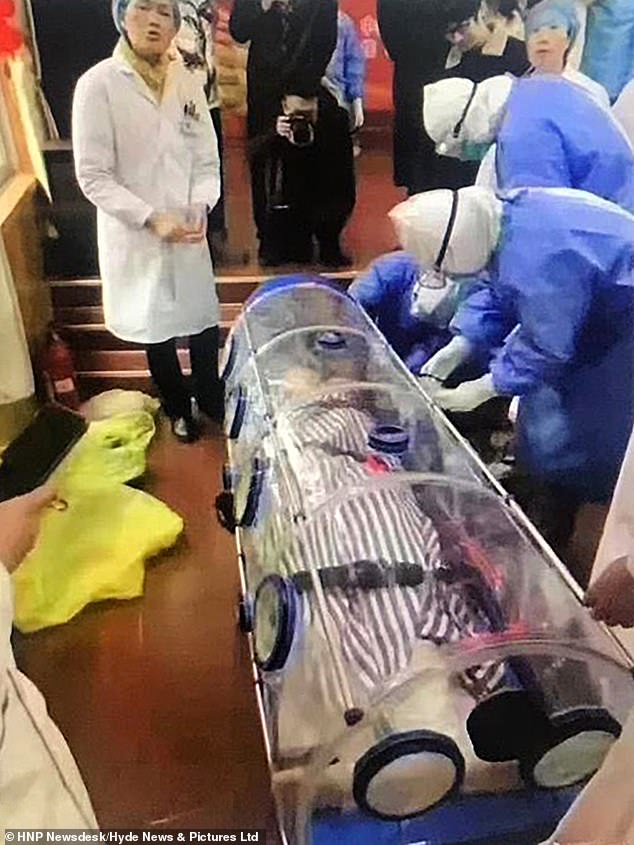 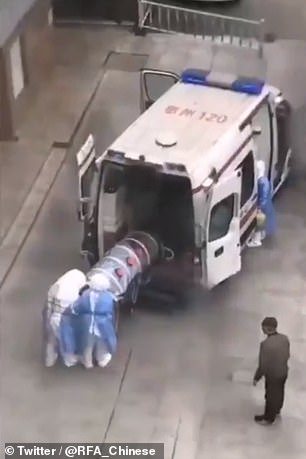 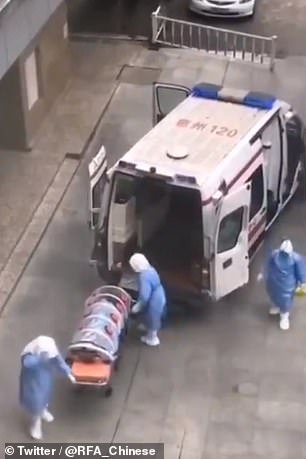 Pauline Cafferkey, from Glasgow, was seen being unloaded from military aircraft in a transportable isolator on multiple occasions between 2014 and 2016.

The exact piece of equipment used to move the Scot was called a FlexiPod. It looked like a hospital bed wrapped in clear PVC plastic that had an air filtration system.

It was developed under the direct instructions of the NHS. The FlexiPod is used worldwide by the Royal Air Force Tactical Medical Wing for transporting patients with highly infectious diseases.

Twenty medical workers in China have so far been struck down with the new strain of coronavirus while looking after patients, the country’s officials revealed.

So far it has killed 18 people and infected almost 600 in 10 countries – but experts predict the true number of cases could be in the thousands and it may kill as many as two in 100.

It’s believed that the source of the virus were the live animals traded in Huanan Seafood Wholesale Market, the largest of its kind in the city of Wuhan.

The Chinese authorities have urged its people not to travel in and out of Wuhan for the upcoming Lunar New Year, and strengthened the health screening in transport hubs across the nation.

And the government of Wuhan has ordered all residents to wear face masks in public places. 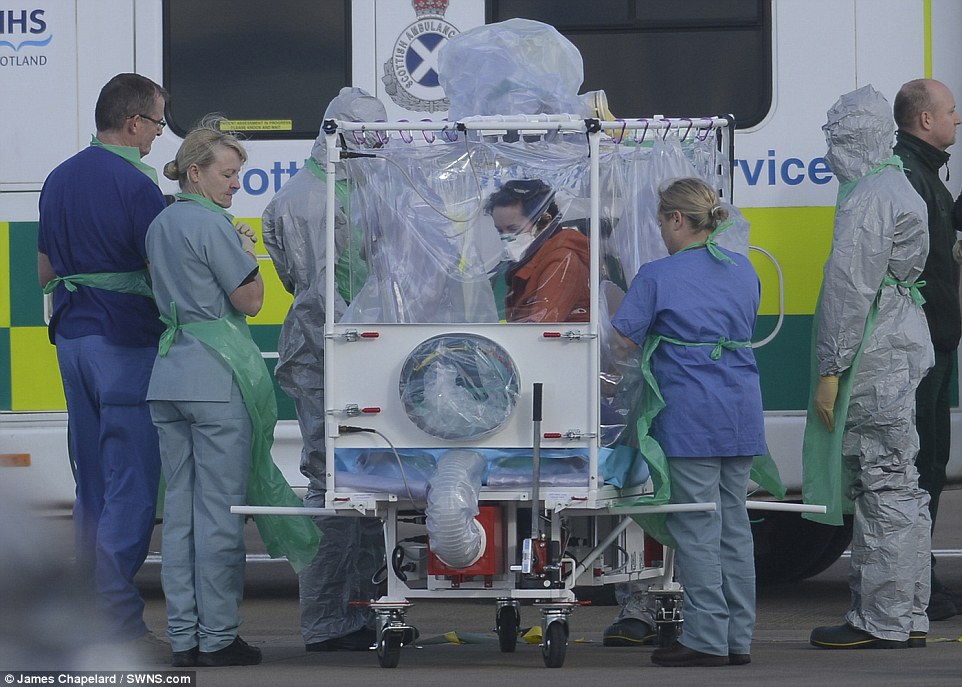 Both clips had echoes of the Ebola outbreak in 2014, which saw an infected British nurse wrapped in a similar quarantine box while being transported between hospitals 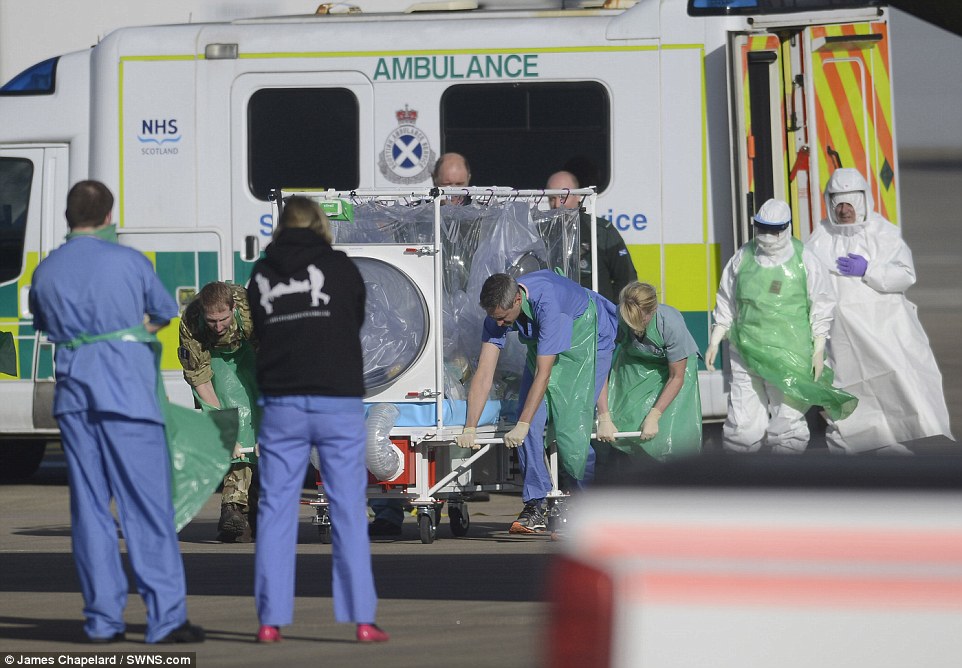 A third city in China went into lockdown today while officials battle to curb the epidemic.

Major Chinese New Year events in Beijing have been cancelled, authorities in Ezhou have shut down train stations, and Huanggang has announced it will suspend public buses and trains as well, following the example of Wuhan, the locked-down city at the centre of the outbreak.

Three more countries have today announced they have recorded cases of the infection – Singapore, Vietnam and Saudi Arabia.

In Singapore, a 66-year-old man who had flown from Wuhan with his family on Monday is recovering in hospital. A 37-year-old companion is also in hospital under observation but has not been diagnosed.

In Vietnam, a Chinese father a son are in hospital in Ho Chi Minh City after flying there from Wuhan and becoming ill. They are in ‘good condition’, according to Vietnamese authorities.

And India’s Minister of State for External Affairs, Vellamvelly Muraleedharan, confirmed on Twitter that an Indian nurse working in Saudi Arabia has been diagnosed with the infection and is ‘recovering well’ in hospital.

This means the illness has now spread to 10 countries, including the US, and European health officials fear the never-before-seen virus will reach the continent where the UK and other nations are already on high alert.

It was revealed today that an American man infected with the deadly virus – which Chinese officials have warned will mutate and become deadlier – came into close contact with at least 16 people before he was put in isolation.

The World Health Organization is facing increasing pressure to declare the crisis a public health emergency, like it has done for Ebola and Zika in the past.  Health chiefs will meet again later today to make a final verdict.