By Joe Davies For Mailonline and Reuters

The hackers have tried to break into the drugmaker’s systems in recent weeks as the company races to deploy its Covid-19 vaccine, two sources said.

The hackers posed as recruiters on networking site LinkedIn and WhatsApp to approach AstraZeneca staff with fake job offers, the sources said.

They then sent documents purporting to be job descriptions that were laced with malicious code designed to gain access to a victim’s computer.

The hacking attempts targeted a ‘broad set of people’ including staff working on Covid-19 research, said one of the sources, but are not thought to have been successful.

The North Korean mission to the United Nations in Geneva did not respond to a request for comment.

Pyongyang has previously denied carrying out cyberattacks. It has no direct line of contact for foreign media. 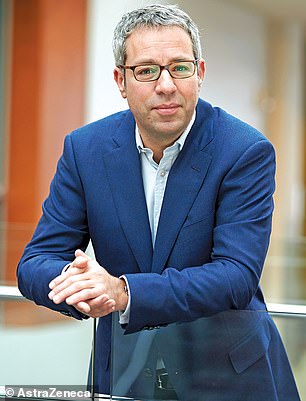 AstraZeneca, which has emerged as one of the top three Covid-19 vaccine developers, manufacturing a vaccine developed by the University of Oxford, declined to comment. Pictured: Mene Pangalos, AstraZeneca’s vice president for research

The sources, who spoke on condition of anonymity to discuss non-public information, said the tools and techniques used in the attacks showed they were part of an ongoing hacking campaign that US officials and cybersecurity researchers have attributed to North Korea.

The campaign has previously focused on defence companies and media organisations but pivoted to Covid-related targets in recent weeks, according to three people who have investigated the attacks.

Cyberattacks against health bodies, vaccine scientists and drugmakers have soared during the Covid-19 pandemic as state-backed and criminal hacking groups scramble to obtain the latest research and information about the outbreak.

Western officials say any stolen information could be sold for profit, used to extort the victims, or give foreign governments a valuable strategic advantage as they fight to contain a disease that has killed 1.4 million people worldwide.

Microsoft did not name any of the targeted organisations.

South Korean lawmakers said on Friday that the country’s intelligence agency had foiled some of those attempts.

Hackers from Iran, China and Russia have previously attempted to break into leading drugmakers and even the World Health Organisation this year, it has been reported.

Tehran, Beijing and Moscow have all denied the allegations.

Some of the accounts used in the attacks on AstraZeneca were registered to Russian email addresses, one of the sources said, in a possible attempt to mislead investigators.

North Korea has been blamed by US prosecutors for some of the world’s most audacious and damaging cyberattacks, including the hack and leak of emails from Sony Pictures in 2014, the 2016 theft of $81million from the Central Bank of Bangladesh, and unleashing the Wannacry ransomware virus in 2017.

Pyongyang has described the allegations as part of attempts by Washington to smear its image.

HOW DO THE OXFORD, MODERNA AND PFIZER/BIONTECH VACCINES COMPARE?

Moderna and Pfizer/BioNTech have both released interim results of the final stage clinical trials of their vaccines, with both suggesting they are extremely effective.

Oxford University has published the findings from its second phase, which show the jab provokes an immune response and is safe to use – it is not yet clear how well it protects against coronavirus in the real world.

Here’s how they compare:

mRNA vaccine – Genetic material from coronavirus is injected to trick immune system into making ‘spike’ proteins and learning how to attack them.

mRNA vaccine – both Moderna’s and Pfizer and BioNTech’s vaccines work in the same way.

Recombinant viral vector vaccine – a harmless cold virus taken from chimpanzees was edited to produce the ‘spike’ proteins and look like the coronavirus.

UK has ordered five million doses which will become available from March 2021. Moderna will produce 20m doses this year, expected to stay in the US.

UK has already ordered 40million doses, of which 10million could be available in 2020. First vaccinations expected in December.

UK has already ordered 100million doses and is expected to be first in line to get it once approved.

What side effects does it cause?

Moderna said the vaccine is ‘generally safe and well tolerated’. Most side effects were mild or moderate but included pain, fatigue and headache, which were ‘generally’ short-lived.

Pfizer and BioNTech did not produce a breakdown of side effects but said the Data Monitoring Committee ‘has not reported any serious safety concerns’.

Oxford said there have been no serious safety concerns. Mild side effects have been relatively common in small trials, with many participants reporting that their arm hurt after the jab and they later suffered a headache, exhaustion or muscle pain. More data is being collected.