A police officer who was suspended for allegedly assaulting two suspects including a 15-year-old boy is being investigated for Tasering a third by using ‘excessive force’.

The unnamed officer from West Midlands Police (WMP) was suspended after shocking footage emerged of him kicking and hitting the boy on April 21.

The same officer was also filmed beating a man suspected of stealing a bicycle the day before.

Now it has emerged the same officer is being investigated over the Tasering of a burglary suspect after a pursuit on February 27.

An officer from West Midlands Police was captured on CCTV, above hitting a 15-year-old boy to the ground after he refused to be stop and searched on April 21

A video emerged of the officer grabbling with the 15-year-old, which happened at 5pm on April 21.

A second video of the officer hitting a cyclist after he suspected he was on a stolen bike later emerged which took place the day before. The officer was suspended.

A complaint has now been made after the officer allegedly used a Taser during an incident in February. 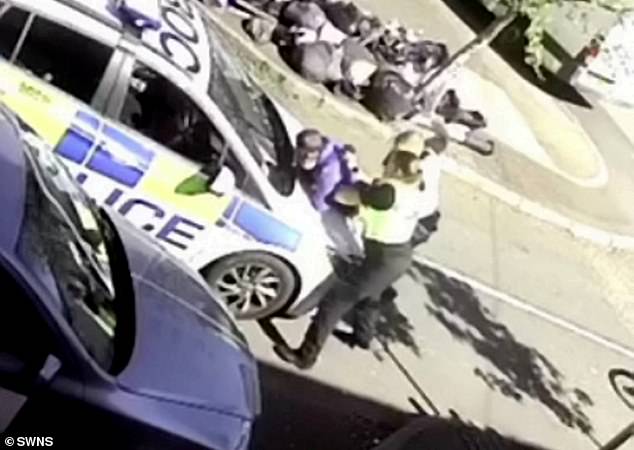 West Midlands Police said two officers stopped a man in Aston, Birmingham, on April 20 who they suspected was on a stolen bicycle.

The force said: ‘The man was detained and it is alleged the officer assaulted the man before he was released with no further action.’

CCTV shows him beating the cyclist on a police car and he is seen dragging the 44-year-old man off his bicycle in the middle of the street.

The officer, who was not wearing PPE, then yanked down the bemused man’s protective face mask and pinned him against the bonnet of a patrol car.

While his female colleague held the man down the officer punched him three times in the back.

The disturbing footage shows him only stopping the attack when a silver Ford Focus drove past the scene in Frederick Road in Aston, Birmingham.

He then appears to punch the man again before kneeing him in the side as his colleague puts the handcuffs on.

Several passersby appeal to the officer to stop but he responds by body slamming the cyclist against the car.

A spokesperson said: ‘A complaint was received after the officer stopped a teenager on 21 April in Melbourne Avenue, Newtown.

‘In the ensuing incident it is alleged that the officer used unnecessary force in striking and kicking the young person.

‘A further complaint was received which involves the same officer. 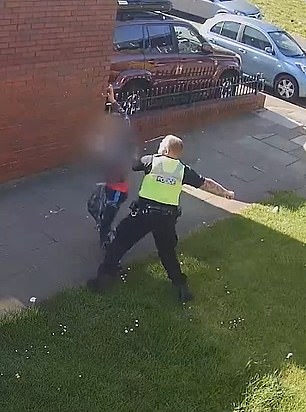 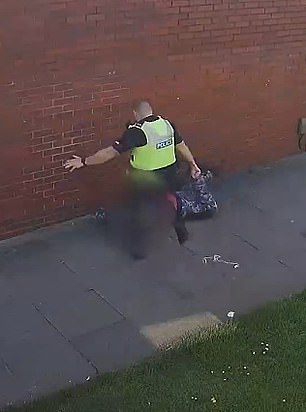 The teenager pictured before he was taking to the ground by the officer, left, and afterwards, right on April 21. The boy was stopped and searched after ‘acting suspiciously’, said police

‘It relates to a prior incident on 20 April in Frederick Road, Aston, where two officers stopped a man they suspected was on a stolen bicycle.

‘The man was detained and it’s alleged the officer assaulted the man before he was released with no further action.’

The man’s treatment is now the subject of a formal complaint lodged by Birmingham community activist Desmond Jaddoo, acting on behalf of the cyclist.

Mr Jaddoo has accused police of racial discrimination, assault, false imprisonment and use of excessive and unjustified force.

The victim of the first attack was stopped by police investigating the theft of a black bicycle while the man’s bike was grey and white. 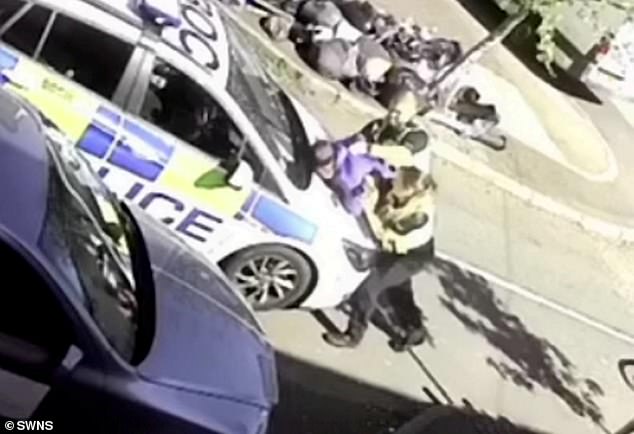 The cyclist is then pinned down against the bonnet of a patrol car, pictured, by the two officers on April 20. The suspended male police officer punched him three times in the back

After the attack he contacted community activist Desmond Jaddoo who lodged a complaint against the officer.

Mr Jaddoo said: ‘The cyclist is still frightened and we are trying to restore some confidence. He still has bruising and has been resting.

‘He is back out cycling for his exercise but he is very apprehensive when he sees police officers. He gets out of their way.

‘My complaint has been acknowledged by the police and they have suspended the officer. This is a full-blown IOPC investigation.

‘I deal with a lot of issues of this nature – excess force by police officers and deaths in custody.

‘The man who saw it from his house thought he would die.

‘One of the things we see in times like these is increased force against the Afro Carribean community, but justice and fairness matter for us all.

‘It was an unprovoked attack. The man wasn’t resisting, he was questioning like he has the right to do.

‘He had done nothing wrong – his bike was white and grey and they were looking for a black one.

‘It was a very, very violent attack.

‘People have been saying we are going back to the dark ages of the 1970s, but there is independent evidence of what happened and that is what the police will be held to account for.

‘Everyone can judge for themselves what happened.

‘The police officer walks up to him and takes him back to the car.

‘Within seconds he is on the car bonnet being punched and his head is being banged on the bonnet.

‘It is a very fierce, unprovoked attack with four or five punches to the kidney.

‘Then the police officer lifts his knee and knees him in the kidneys.

‘The homeowner was very shocked. He poured water on the man’s face to give him first aid because he thought he might die.

‘He knows me and the cyclist and he knew what he saw was wrong, so he sent me the footage.

‘Every single person in the Aston community I’ve spoken to, which is majority Asian and Black, condemns this as a racist, malicious attack against a man riding his bicycle.

‘This is not a young man, this is a man in his forties.’

It comes as the IOPC launched an investigation into a Metropolitan Police officer who caused a man life-changing injuries after shooting him with a Taser in Haringey, north London.

The officer will be subject to a criminal investigation after deploying the device on the man, in his 20s, as he jumped over a wall on May 4.

The IOPC said the man fell and suffered serious injuries and was arrested for drug-related offences.

The officer will be asked by IOPC investigators to give a written account under caution for the alleged offence of causing grievous bodily harm.