Suzuki AXES its £20million advertising deal with Ant and Dec

Car company Suzuki has axed its £20million advertising deal with Ant and Dec after Ant was charged with drink-driving this week.

Suzuki first struck a deal with the stars in 2015 but they cut ties with the duo today after Mr McPartlin’s daylight car crash in Richmond last Sunday.

It will raise fears that Ant’s crash and subsequent arrest will badly damage their brand.

Dec has already been forced to say he will present the final two Saturday Night Takeaway shows with Ant – the first time this will happen in their 20-year career.

A statement from Suzuki GB Plc said: ‘Suzuki are withdrawing their advertising campaign with Ant & Dec.

‘No further material featuring the duo will be aired and Suzuki’s endorsement deal with the pair has come to an end.

‘We agree with ITV and Ant & Dec that it was the correct decision not to broadcast Saturday Night Takeaway this weekend.

‘As a car brand we recognise the seriousness of Ant’s charge. We completely support Ant’s decision to seek treatment.

‘Suzuki will however continue to sponsor the last two episodes of this series of Saturday Night Takeaway with our current idents.

‘Suzuki very much supports Dec and ITV’s decision to broadcast the shows and as headline sponsors we also want to support the competition winners who have won places on the plane to Florida for the series finale.’ 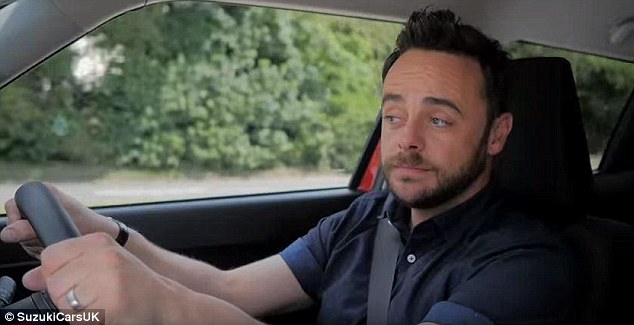 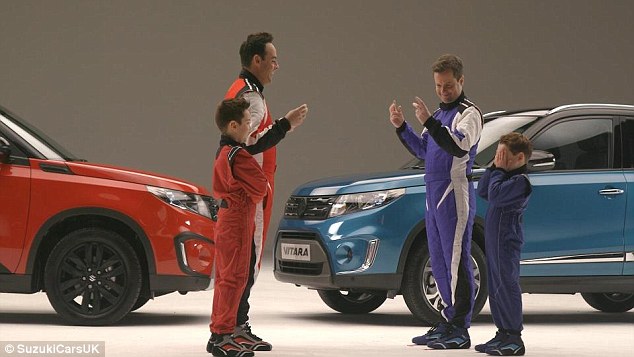 Re-thinking: Given the nature of Ant’s incident, car firm Suzuki – whose ads featuring Ant and Dec have run during Saturday Night Takeaway, Suzuki felt they had to end their relationshio

An industry insider told the The Sun: ‘Commercially it has been a big success for Suzuki, Ant, Dec and ITV – not to mention very lucrative.’

Meanwhile, Ant was given ‘hugs and reassurances’ from Declan Donnelly before he checked into rehab on Wednesday following his drink-driving charge. 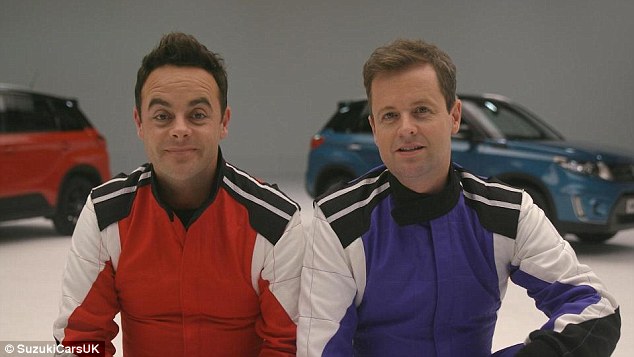 Meanwhile, Ant was given ‘hugs and reassurances’ from Declan Donnelly before he checked into rehab on Wednesday following his drink-driving charge

He was earlier pictured leaving his rented £1.6million London home with a bag after Dec visited him there earlier in the day following his one-hour interview at Kingston Police Station about his three-car smash on Lower Richmond Road on Sunday afternoon.

Before their ’emotional meeting’ Dec announced he would host their ITV show Saturday Night Takeaway by himself for the final two episodes of the series.

Ant has been ‘hit hard’ by his painkiller addiction and impending £60million divorce from his wife of 11 years Lisa.

He made the decision to return to rehab and step away from his job on Tuesday. The two final episodes of his show Saturday Night Takeaway will also go ahead without him, leaving Declan Donnelly to present alone for the first time in their careers.

In an earlier statement, Ant’s publicist said: ‘Ant has decided to go back into treatment and step down from his current TV commitments.

‘He has spoken with Dec and ITV and asked for time off for the foreseeable future.’

And speaking of his estranged other half Lisa Armstrong, a source told The Sun on Thursday: ‘Lisa really thinks she could have helped to save him.

‘She’s been upset watching on from afar and thinks she might be able to get him through the situation.’

But those close to Ant insist their struggling marriage was only making his problems worse, saying: ‘The relationship wasn’t helping. Ending it was a positive step.’