Sven-Goran Eriksson has revealed that North Korean officials attempted to persuade him to fix their draw for the 2010 World Cup.

The former England manager was at Notts County at the time, after he was hired by convicted conman Russell King as the club’s director of football.

During his interview, the 74-year-old discusses a trip he made with King to North Korea, in which he was asked to help give North Korea an easy draw for the tournament in South Africa.

He said: ‘They (North Korean representatives) knew I was a member of FIFA Football Committee.

‘They said, ‘Can you please help us?’. ‘Of course I can help you, if I can’, I said. I thought they wanted balls or shoes or something like that.

‘They said, ‘We want to have a simple draw’. They wanted to have help with the draw. Of course, I said, ‘Do you really mean what I [think]? I can’t do that. Nobody can do that. That’s absolutely impossible and it’s criminal, even to try.’

‘But they never believed me. The amazing thing is that it looked like they don’t believe that I can’t do it – they believed that I just didn’t want to do it. Very strange.

Eriksson was asked to go on a trip to North Korea with the conman who appointed him as director of football at Notts County, Russell King (right)

‘That was, I guess, the main reason why I was invited and why it was so important that I went there.’

North Korea were handed a tricky draw for the tournament as they were placed in the same group as Brazil, Portugal and the Ivory Coast.

After a respectable performance in their 2-1 defeat to Brazil, they lost 7-0 to Portugal and 3-0 to the Ivory Coast.

Eriksson revealed that he did not want to go on the trip to North Korea with King, only to be told it was ‘important’ for Notts County.

Speaking on his trip to Pyongyang with King, Eriksson said: ‘One day they came to me and said, ‘You have to please come to North Korea with us. It’s important.’ I said, ‘No, I don’t want to go to North Korea.’

‘I knew a person working for the government in England. I asked that person, ‘Should I go to North Korea?’. She said, ‘Absolutely not, Sven, you should not go there.’ 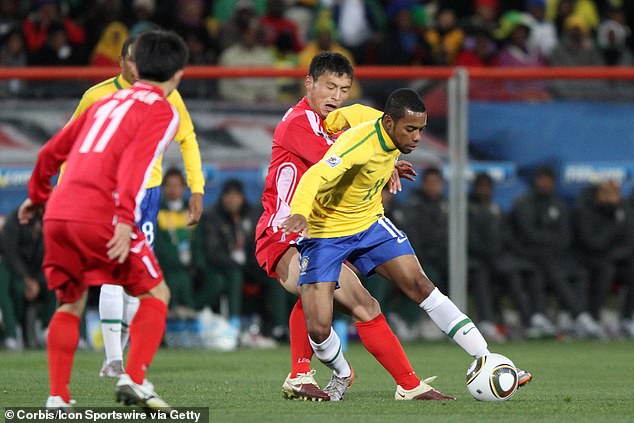 North Korea went on to draw Brazil, Portugal and Ivory Coast in which they lost all three games

The BBC podcast centres around the controversial takeover of Notts County by Munto Finance in 2009 in which King seized control of the club.

There were promises of untold wealth, alongside a plan to take them from the fourth tier of English football to the Premier League in five years.

The biggest headlines of the summer were made with the signings of England international defender Sol Campbell and goalkeeper Kasper Schmeichel.

Campbell made just one appearance for the club while Schmeichel was never paid by the club and left at the end of the season.

Reports of the club’s large debts, including an unpaid tax bill emerged towards the end of 2009.

Eriksson then resigned as director of football in February 2010 following the club’s takeover by former chairman Ray Trew.

The Swede waived a multi-million pound payoff in order to assist the takeover.