An 80-year-old man who ended up waiting nearly 30 hours to be treated at hospital has died.

John Williams fell and hit his head on the floor at his home in Gowerton, Swansea, last Tuesday morning.

An ambulance was called immediately, but the crew didn’t arrive until 7.30am on Wednesday – 23 hours after ringing 999.

Mr Williams was forced to wait a further seven hours outside Morriston Hospital before being admitted.

John Williams fell and hit his head on the floor at his home in Gowerton, Swansea, last Tuesday. He waited 23 hours for an ambulance and a further seven to be admitted to hospital

His devastated son, Darren, a 48-year-old car salesman, said less than three hours later staff wanted to let him go home. But after having another fall in the hospital they decided to keep him in.

Mr Williams eventually died on Sunday at 9.45am.

Darren today revealed he feels bitter over the loss of his father and that the system had let his family down.

He said: ‘I am a little bit raw. It was the last thing I expected – I can’t help feeling bitter towards the system.

‘It’s not the ambulance crew’s fault, they can’t do their jobs because of politics.

‘I was told the longest wait for an ambulance was 24 hours, there are a lot of delays that go unreported.’

‘I was so wound up by the situation. There must be so many people going through the same thing.

‘I feel sorry for the ambulance crews as they are doing two calls a day because they are outside hospitals. The whole system is wrong.’

Darren added: ‘I can’t help thinking that all this has contributed to my father’s passing. 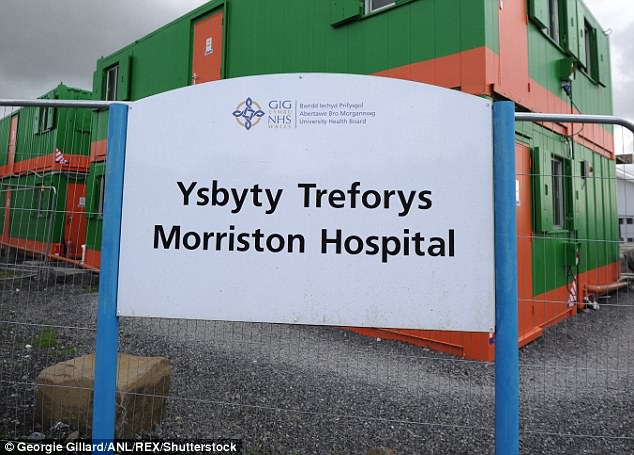 An ambulance was called immediately, but the crew didn’t arrive until 7.30am on Wednesday – 23 hours after ringing 999. Mr Williams was forced to wait a further seven hours outside Morriston Hospital before being admitted

IS THE NHS STILL UNDER PRESSURE?

Concerned medics have repeatedly warned ‘there is no more to give’ and the cash-strapped NHS is working at the limits of its capacity’.

Health and Social Care Secretary Jeremy Hunt has already been pushed to admit that the NHS is battling it’s ‘worst ever winter’ this year.

A series of official performance figures released last month by health chiefs from across every trust in England backed-up his claims.

Just 85 per cent of patients were admitted, transferred or discharged within four hours of arrival in casualty units across England in February.

It topped the 85.1 per cent recorded in December and January 2018, when the Red Cross were drafted in to help combat the ‘humanitarian crisis’ in hospitals.

‘What should have happened in my view is a rapid response paramedic should have been with my dad within 40 minutes to an hour.

‘He should have been assessed on the kitchen floor and they could have made the call from there.

‘He might still be with us. It is just unbelievable. How many people are going to lose their lives through this? Sooner or later it is going to be a child.’

A spokeswoman for the Welsh Ambulance Service said a ‘full investigation’ would be held into the incident.

It said, however, he was admitted when his condition began to deteriorate and that their staff did all they could, but Mr Williams died a few days later.

Darren said he went to his parents’ home after his mother phoned to tell him his father had fallen in the kitchen and was on the floor. 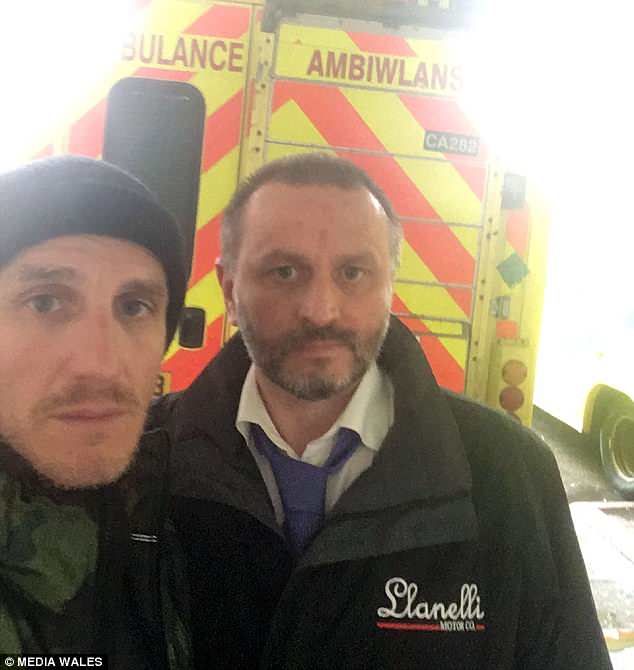 Mr William’s devastated son Darren (right, pictured with his brother Leigh) today revealed he feels bitter over the loss of his father and that the system had let his family down

He said he called again two and a half hours later, and twice more, but an ambulance did not arrive until 7.30am on Wednesday.

Darren said his father was conscious but confused while lying on the floor and after 11 hours there, they decided to move him.

He said: ‘Myself and my brother decided enough is enough, so against obviously medical wishes we picked him up because it was ridiculous.

‘We sat him in his chair and he went to sleep.

‘Obviously he hadn’t had medication when he was admitted to hospital, that would have been about 36 hours, which equates to probably over 30 tablets.

‘We were told not to give him any medication.’

Darren believes this could have contributed to his father’s death because some of the tablets were for his heart.

After his father died, Darren said he was told it was due to lack of oxygen and his heart ‘gave up’.

He said the ambulance crew, when they arrived, were ‘brilliant” and ‘just trying to do their job in a very difficult situation’.

Of the ambulance service he added: ‘Those crews are doing two calls a day because they are stuck outside the hospital. It is shocking.’

Darren said that about two hours after his father was admitted, the hospital wanted to discharge him.

He said: ‘I said “I want it put on the record that he is not right, he has obviously fallen for a reason, we’ll be back here tomorrow and we’ll have the same scenario again”.’

Darren said he went to collect his vehicle but while he was gone his father fell again and the decision was made to keep him in.

‘I was with him Saturday night and on Sunday morning when I saw the no-caller ID on my phone I thought it’s obviously a phone call to arrange to come and pick him up on Monday morning, not to be told “get here fast he is short of breath”.’

Darren said his father died at the same time the call was made, 9.45am on Sunday.

WHAT DID THE AMBULANCE SERVICE AND THE HOSPITAL SAY?

Claire Bevan, director of quality, safety and patient experience for the Welsh Ambulance Service, said: ‘We would like to extend our sincere condolences to Mr Williams’ family at this very sad and difficult time.

‘We want to ensure a full investigation is carried out into the wait that Mr Williams experienced and we will be communicating with Mr Williams’ family.

‘We would like to take this opportunity to extend our thoughts and deepest sympathies to Mr Williams’ family.’

An Abertawe Bro Morgannwg University Health Board spokeswoman said: ‘We would like to offer our sincere condolences to Mr Williams’ family and friends.

‘We have spoken with Mr Williams’ family and urge them to contact us directly if they have any further queries or concerns about his care.

‘With the permission of the patient’s family we’re able to explain a bit about Mr Williams’ condition and care.

‘Mr Williams was brought to Morriston Hospital with minor injuries after a fall at home.’

They added: ‘Following a thorough assessment and observations in the Emergency Department doctors couldn’t identify a reason for this fall.

‘However, later on Mr Williams’ general condition began to deteriorate and due to this doctors then decided to admit him to a ward for further tests and observation.

‘Unfortunately, Mr Williams’ health continued to deteriorate; staff did all they could to treat him but sadly he died a few days later.’