Swansea City are confident of completing the loan signing of Andy King from Leicester City before Wednesday’s transfer deadline.

The Swans made a surprise swoop for the 29-year-old midfielder, who had been linked with several Championship clubs, after ditching their interest in winger Lazar Markovic despite agreeing a loan deal with Liverpool.

They were unable to sign both players due to Premier League loan rules.

Swansea have also agreed to re-sign Andre Ayew from West Ham for £18million.

Chairman Huw Evans told Sky Sports News: ‘We’re quietly confident. It was important we got them done, in particular Andre because we’ve been working on that for quite a while.

‘We’ve been waiting on West Ham to give us the green light to complete that deal and we’re waiting to get the paperwork all signed off.

‘Andy is different, he’s someone to come in and boost the squad which he’s keen to do that and most importantly Carlos was keen to get those positions filled for us to have a good healthy squad between now and the end of the season.’

King has fallen down Claude Puel’s pecking order in recent weeks and Leicester are willing to allow a temporary transfer. 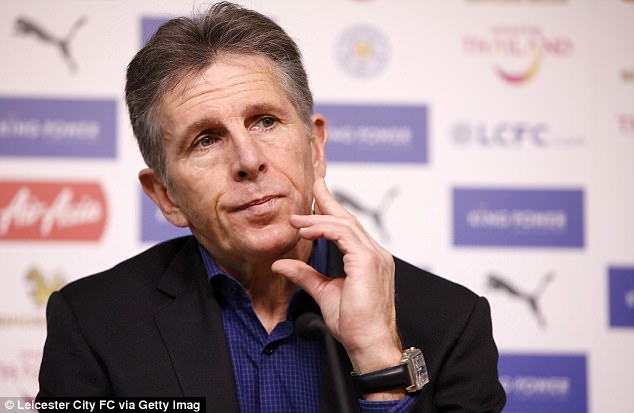 Sheffield United, Bristol City, Middlesbrough and Sunderland had all expressed interest in King, who has 62 goals in 378 games for Leicester.

Ayew was also heading to Swansea ahead of an £18m move from West Ham.

The 28-year-old will undergo a medical on Wednesday afternoon, with an agreement on personal terms understood to be a formality.

Manager Carlos Carvahal has been in the market for a new forward as he looks to steer the Welsh club away from relegation.