Pets at Home’s departing boss is set to leave on a high as one of the UK’s biggest lockdown beneficiaries posted its best ever annual results.

Peter Pritchard is being replaced as chief executive from the start of next month by Sky TV’s former head consumer officer Lyssa McGowan after four years in his role, during which time the company has transformed into a retail giant.

Its latest annual results showed total group revenue for the 53 weeks to the end of March climbed 15.3 per cent from the previous year to £1.32billion, thanks to customer numbers soaring by another 1.2 million.

Expansion: Pets at Home’s latest annual results showed total group revenue for the 53 weeks to the end of March climbing 15.3 per cent from the previous year to £1.32billion

An average 23,000 people became new members of the Cheshire-based company’s VIP Puppy and Kitten Club each week, compared to about 7,000 two years ago.

The growth in Pets at Home customers over the past two years has helped boost retail sales by around a quarter on a like-for-like basis and doubled revenues from its omnichannel market.

Sales at its veterinary division have also risen by about 25 per cent despite sliding last year following the £100million sale of five specialist vet centres to its rival Linnaeus Group in 2020.

By comparison, sales of food and accessories have kept expanding, with the former growing by 21.3 per cent last year due to the surge in pet ownership and the latter benefiting from high demand for dog toys and consumables.

As a result, the group’s retail pre-tax profits soared by 70 per cent to just above £100million and its overall underlying earnings before tax jumped by about two-thirds to a record £144.7 million. 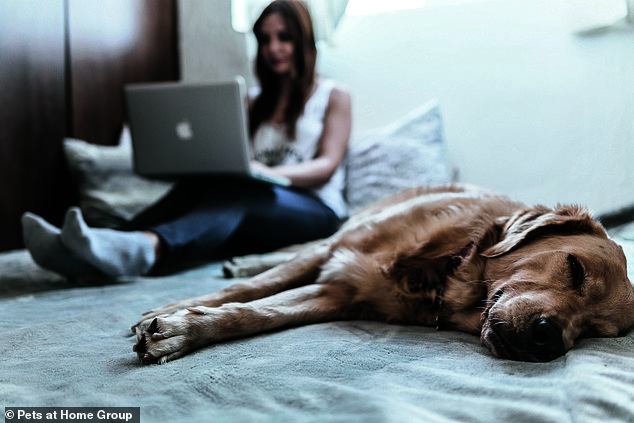 Family friend: Pets at Home has been a major beneficiary from the Covid-19 pandemic as more Britons have sought canine and feline companions to keep them company

In turn, this helped the company post its highest-ever underlying free cash flow of £95million, announce a share buyback programme worth up to £50million and a dividend hike of more than a third.

Pets at Home Group shares jumped 13.25 per cent to 308.8p following the release of its preliminary results on Wednesday, making it the top riser on the FTSE 350 Index.

Commenting on the results, Pritchard said: ‘Despite another period characterised by significant and evolving external challenges, our performance this year has been noteworthy, delivering record sales, profit, and cash flow.’

‘I would like to express my heartfelt thanks to our truly inspiring colleagues and Partners across the group for their continued adaptability and commitment to making Pets at Home bigger, stronger, and more efficient.’

He became Pets at Home’s head of retail before eventually ascending to the chief executive role in 2018 when the firm was hit by a slide in profits.

The business then set about slashing prices to help it compete with rivals like Amazon, and reoriented its focus towards developing more profitable services such as dog grooming and veterinary care.

Trade began improving, but it accelerated when the Covid-19 pandemic hit in 2020, partly because it could keep its outlets open during strict lockdown periods.

In a recent interview with the Financial Mail on Sunday, Pritchard said he believes the high demand for pets and pet products will continue to grow, even amidst a worsening cost-of-living crisis.

He remarked: ‘We’re entering a really challenging economic environment, but I don’t think we’re going to see a big relinquishing of pets. When we ask customers where they’re going to cut back, pets sit on a par with children; it’s the last thing on the list.’

Incoming chief executive Lyssa McGowan is set to take the reins at the start of June with a basic salary of £580,000 and a potential annual bonus worth up to 170 per cent of that amount.

Neil Shah, director of research at the Edison Group, said McGowan ‘certainly has big shoes to fill and challenges to face, with hit eye-watering inflation and hike in the cost of living likely to affect consumer habits throughout the rest of 2022.’

‘With City expectations for underlying pre-tax profits of £151million for the current financial year, and competition from global giants like Amazon eating up the market share, she has her work cut out for her.’