Police in Oregon have arrested two Alabama men suspected of shooting dead seven people in a dispute about a self-made club named the Seven Deadly Sins.

Cops believe the men then tried to burn down a residence on the 500 block of Talucah Road in Valhermoso Springs, Alabama around 11.30pm on June 4 with the dead bodies still inside.

One of the two 911 callers who reported hearing gunfire said they heard it intermittently for an hour. 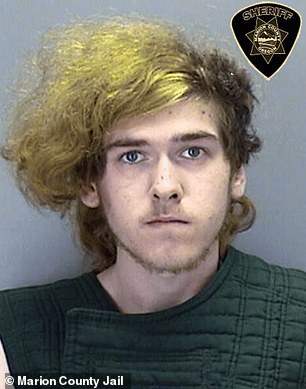 Murder suspects Frederic Rogers (left), 22, and John Legg (right), 19, were arrested Sunday on suspicion of shooting dead seven people at a home in Alabama on June 4 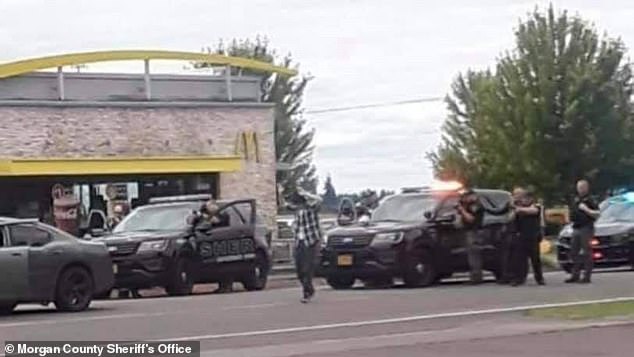 Deputies with the Marion County Sheriff’s Office observed the suspects and initiated a traffic stop on a Silver/Grey Dodge Charger with Alabama license plate in Stayton, Oregon at 12.30pm on Sunday

When authorities arrived at the scene the home was only partially set alight.

Firefighters extinguished the flames and the victims were later found deceased, some with multiple wounds.

At the time Madison County Sheriff’s Office’s public information officer Mike Swafford said it was a ‘horrific scene’ that would ‘take some time’ to process.

Swafford said it’s believed the suspects went to the property with the intention of carrying out the ‘incredibly heinous… cold-blooded’ crime.

The Madison County Sheriff’s Office, investigated in collaboration with the Somerville Police Department and the FBI’s Violent Crimes Task Force.

Sheriff Ron Puckett said in a media briefing on Monday that the two suspects and three of the victims, Jones Jr., Roberts and Benford, were part of a self-made ‘club’ named 7 Deadly Sins.

The Sheriff did not reveal any more details about the club. 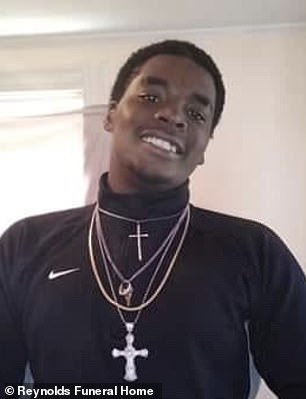 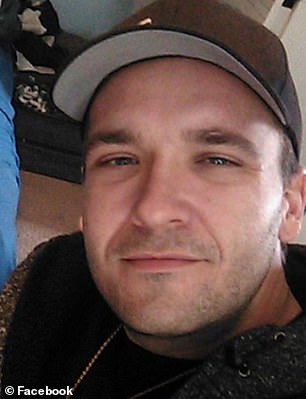 They are believed to have been in a Seven Deadly Sins club with three of the victims, including  Roger Lee Jones Jr., 19 (pictured left) and Jeramy Wade Roberts (right)z. James Wayne Benford, 22, is not pictured

However it was previously reported that neighbors said it was known for heavy drug activity and authorities had been called to the home on multiple occasions.

Authorities believe the suspects started the fire to get rid of evidence.

The suspects went on the run and investigators issued a BOLO alert to law enforcement nationwide.

They obtained information on the travel and potential whereabouts of the suspects and once warrants were obtained, agencies identified a home in Salem, Oregon as a potential destination.

Deputies with the Marion County Sheriff’s Office observed the suspects and initiated a traffic stop on a Silver/Grey Dodge Charger with Alabama license plate in Stayton, Oregon around 12.30pm on Sunday.

The suspects were detained at gunpoint by a SWAT team and taken into custody without incident.

They are currently located in the Marion County Jail awaiting extradition to Alabama where they face capital murder charges.

The Morgan County Sheriff’s Office said: ‘We followed up on every lead, reviewing every tip and piecing together what lead up to the events of June 4.’

A neighbor reported hearing gunfire intermittently for an hour before the house was set alight. Neighbors said it was known for heavy drug activity and authorities had been called to the home on multiple occasions 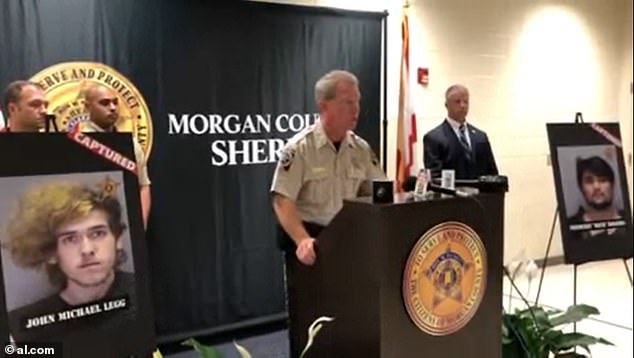 Sheriff Ron Puckett spoke in a media briefing on Monday. Authorities believe the suspects started the fire to get rid of evidence