Swearing in Spanish and hugs with Ronnie: Mark Clattenburg selects the FIVE best players he refereed

Taking charge of footballs heavyweights heaps pressure on a referee, but Mark Clattenburg looks back fondly on his encounters with legends of the game.

The former Premier League official’s career highlights include the Champions League and European Championships final in 2016, as well as the Olympic final in 2012.

Those matches, as well as 292 English top-flight games, have seen him show cards to some big personalities. For Mailsport, Clattenburg has listed the five greatest players he has officiated…

The one thing I admired above all else was his ability to raise his game when the team were down.

I refereed him as a young player in the Premier League, then at Real Madrid and he always delivered. You just knew you were sharing the pitch with a truly unique player who could change the game in an instant.

And I got on very well with him. When I went up the stairs to get my medal after the Euro 2016 final, he tried to grab me and give me a hug — that was the level of respect we had. 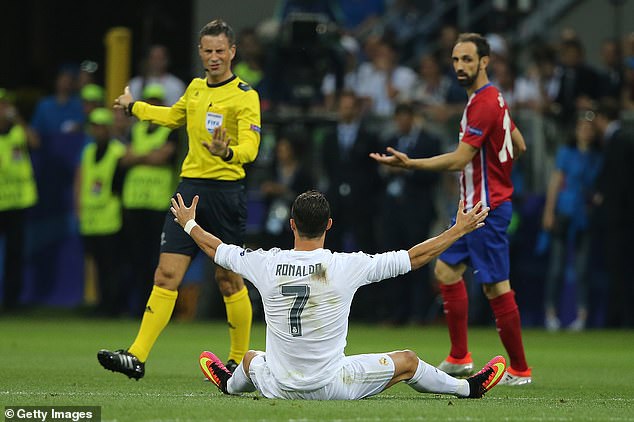 I was disappointed when he got injured early in the final because the game lost a great player. But I never treated him differently from any other player and I think that’s why we had a good relationship.

After one game, a shirt came into my dressing room signed: ‘To Mark, best wishes, Cristiano Ronaldo’. I hadn’t even asked for it. It was such a nice gesture.

I don’t think I ever booked him — maybe that’s why I got the shirt!

The first time I refereed Real Madrid, I remember Iker Casillas got the ball from a corner and within three passes they had scored — I wasn’t even past the halfway line! But that is what great players like Ronaldo can do. He was so quick and clinical. 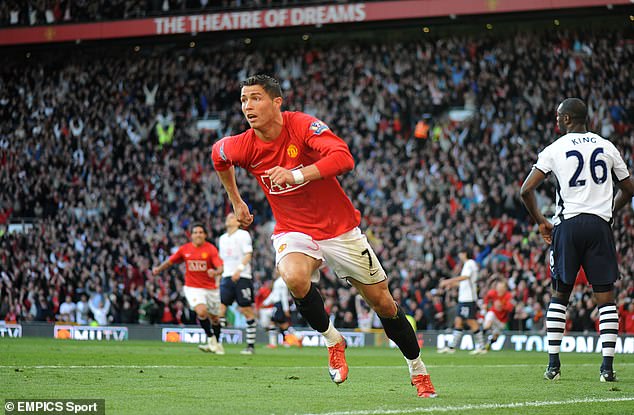 I was in charge when he stepped up for the decisive penalty in the Champions League final in 2016. My only thought was: ‘When this is finished I need to get the match ball!’ But I knew where it would soon be — in the back of the net.

He hadn’t played that well and I could tell he wasn’t fully fit. But you just knew it would still be the Cristiano Ronaldo Show.

When I first refereed Messi, I was shellshocked, genuinely. It was Barcelona against Paris Saint- Germain and, being so close, I remember thinking: ‘Oh my God, this is unbelievable.’

When you referee, you tend to watch the ball. With him, you could lose the ball, so imagine what it was like for defenders!

I had to change the way I analysed the situation when he was on the ball. He was so skilful that opponents would try to stop him in different ways, sometimes by fouling him on the foot, sometimes with their upper body. 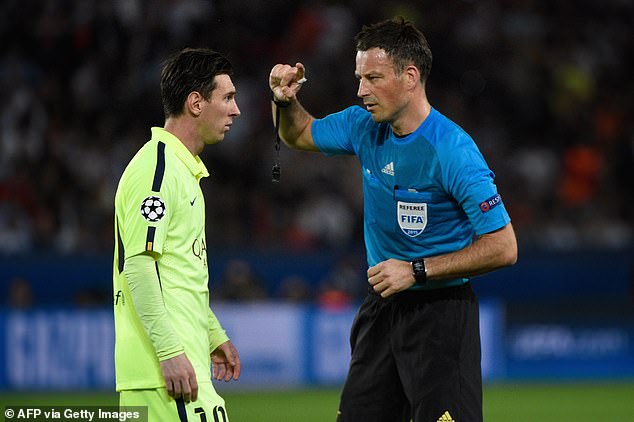 I cautioned him in that first game against PSG for standing on an opponent’s foot, but he never complained or said anything. He never engaged at all, in fact. That was just him.

But, as a referee, you looked forward to sharing a pitch with Messi because you knew the game could be special.

My first game with him was for Ajax and he scored four. When I came home I told my friends: ‘What a player, he’s unbelievable.’

He had that edge to him, a dirty side like Diego Costa, but he had such talent.

I was excited when Liverpool signed him because I knew what an amazing player the Premier League was getting. He played on the edge and you had to manage that. 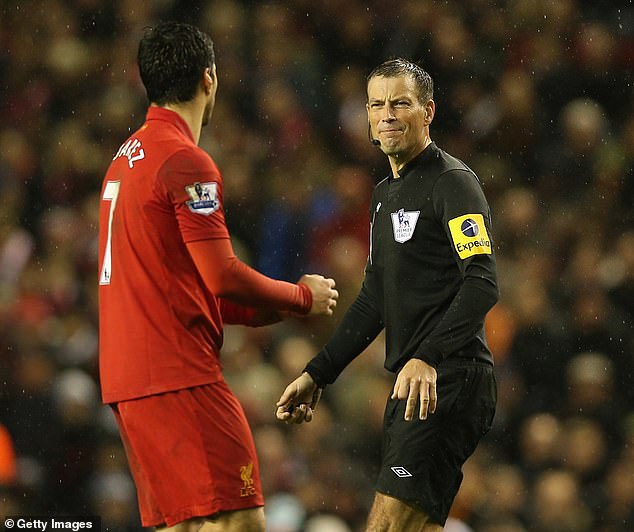 He would always give you the verbals in Spanish. But I’d refereed all over the world and I knew the swear words, so I’d give him one or two back. That would give him a shock!

People talk about the laws of the game. Yes, OK, but refereeing, for me, is more about management of the game and the players.

You have to try to help the product — the game — be the best it can be. You had to know how to handle players like Suarez. If you didn’t, it would cause you more problems down the line.

Probably the best centre half the Premier League has seen and I had so much respect for him.

He supported referees and spoke in such a respectful way. I’ve cautioned him and sent him off, but he would always come back and have time for you.

I remember making a mistake in the first half once and coming out after half-time. He said: ‘Mark, players make mistakes, you’ve made a mistake, forget about it, let’s move on.’ That’s the type of man he was. 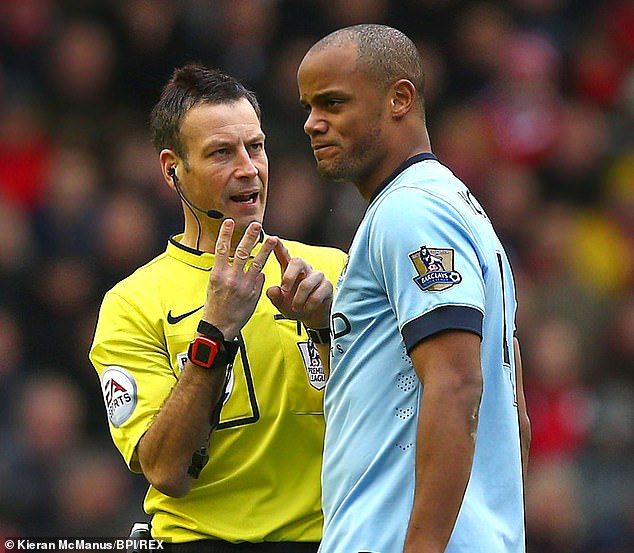 I sent him off for Belgium against Israel for stopping an attack. It was a second yellow, he took one for the team and accepted it.

A week or so later, I had the Manchester derby at Old Trafford and there was an incident in the first half where he slipped into a challenge. It looked quite bad in real time. I went over to my assistant and he said it’s probably a yellow, which I went with.

Kompany went off injured but grabbed me afterwards and said: ‘Thank you for that, I didn’t need a second red card in a week!’

When I left the Premier League I got a call to referee his testimonial which, sadly, I couldn’t do as I had a game in China, but that was nice of him.

When I was a young referee trying to establish myself in the Premier League, there was a lot of pressure on me. But someone like Gary made it so much easier.

He would genuinely praise decisions. Even when you made a mistake, he would tell you to move on. He would talk his way through the game and that included helping the referee. He was such a gentleman.

You had other players who wouldn’t help you, like Craig Bellamy, who constantly abused you during the game — that was difficult. 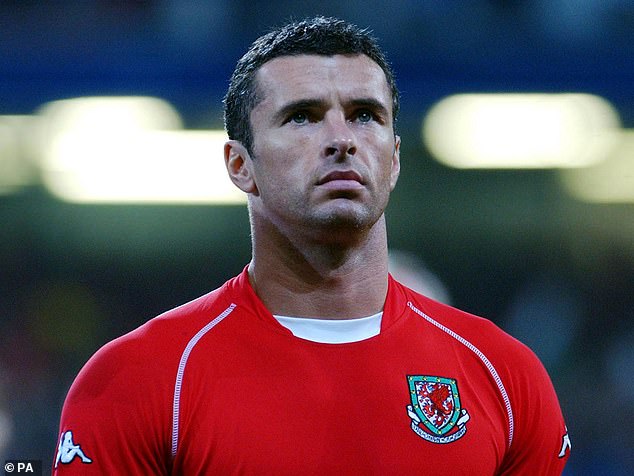 So people perhaps don’t realise what Gary did in that regard and I think that’s something players now should take note of. Here was this wonderful footballer who also had it within him to help others and be a good human being.

He was an awesome player, too. He could control a game from the middle of the park, score goals, defend his own goal, get stuck in, and yet I don’t think I ever even booked him.

He was a role model to all of us.