Scientists have designed a sweatband that can measure blood sugar levels without the need for painful finger-prick tests.

The device is worn on the upper arm and contains sensors that measure blood sugar levels via sweat on the skin’s surface. It transmits the data to a hand-held device, with a digital display of the levels.

It has been developed for people with diabetes who need to regularly check their blood sugar levels — this may involve between four and ten finger-prick tests a day. The results help them work out how much medicine they need to control blood sugar levels.

Poor control can lead in the long-term to complications such as cardiovascular and kidney diseases, vision problems, and damage to nerves from excess sugar in the blood.

A number of patches and sensors have been developed to overcome some of the downsides of repetitive injections, but they mostly need blood samples or are made of more than one complicated component. For example, a device called FreeStyle Libre, worn by Theresa May, is a patch that is worn continuously on the upper arm to monitor glucose levels in fluid between cells — the wearer also needs a separate device to ‘read’ the results from the patch.

Abakus jujube fruit, or ‘red dates’, are high in fibre, antioxidants, and contain 18 of the 24 amino acids needed to form proteins in the body.

Available as a dried snack (58 calories per serving) and crisps (72 cals). £1.99 per bag, ocado.com and abakusfoods.com

The new device is not worn continuously, but is put on when it’s needed.

It has specially-designed sensors to measure sugar levels in the sweat. The body has more than two million sweat glands that constantly produce sweat, even at rest or while we’re asleep. This sweat naturally contains glucose and can mirror the level of sugar in our blood.

Once on the skin, the device takes about 15 minutes for enough sweat — as little as one millionth of a litre — to build up on the sensor so that blood sugar levels can be measured.

The results are automatically analysed and displayed on a handheld device. It is designed to be used at set intervals throughout the day, when patients would usually take a finger-prick test.

In a very small study published in the journal Science Advances, where three people’s blood sugar levels were compared before and after a meal, the sweatband was shown to be as effective as a conventional finger-prick blood test.

Its developers, based at Seoul National University in South Korea, say it can also have tiny needles built into it and, depending on the blood sugar reading, these can then deliver the correct amount of blood sugar-lowering medication. Dr Paul Jenkins, a consultant endocrinologist at The London Endocrine Centre, said: ‘This is a potentially interesting advance in the management of diabetes. If further large-scale studies validate the claims it will be very useful and popular among patients.

Nevertheless I have doubts about the additional claim of being able to automatically calculate and inject the appropriate dose of medication.’ 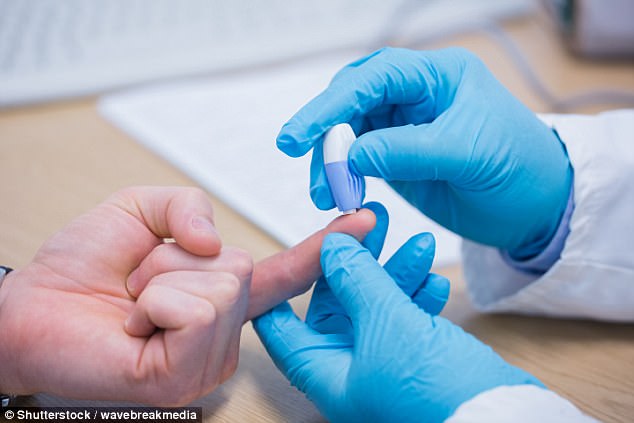 At the moment, diabetes sufferers mainly use finger-pricks to measure their blood sugar levels, meaning that some people prick their finger up to 10 times a day

Meanwhile, up to a third of diabetes cases could be prevented with regular exercise, according to a study in the British Journal of Sports Medicine.

Researchers monitored 44,000 people from 1996 and found the risk of developing diabetes declined with increasing levels of exercise. Those who reported doing the most vigorous exercise were least likely to develop it.

Up to 30 per cent of diabetes cases could be avoided if inactive people engaged in the levels of activity recommended by the World Health Organisation, say the researchers. One theory is that exercise makes muscles more sensitive to insulin, the chemical signal that tells cells to absorb glucose from the blood.

In chronic obstructive pulmonary disease (COPD), which includes emphysema, damage to the airways means glucose, which is normally pumped into the bloodstream to fight infections, leaks into the airways. This encourages infections by providing food for bacteria.

Now scientists at Imperial College London have found that glucose levels in COPD patients are almost double those of healthy people. They’ve called for research to see if medication that lowers blood sugar, such as metformin, could cut infections.

THAT’S why you feel so groggy after an op

Elderly patients and the very young are particularly vulnerable to confusion and grogginess long after coming round from a general anaesthetic.

Now scientists think they know why.

Propofol, a commonly used anaesthetic, is known to act in much the same way as a sleeping pill, but a team at the University of Queensland in Australia has found it also stops brain cells communicating with one other, by blocking a protein, syntaxin1A, that helps form connections between these cells.

These connections may be weaker in the young and old, say the researchers in the journal Cell Reports. The findings could lead to new forms of anaesthesia.

Studies on mice have found that the artificial vanilla flavouring used in cakes could cut flare-ups of the skin condition psoriasis.

Mice with psoriasis given oral vanillan — a synthetic form of vanilla bean extract — for a week had less skin inflammation than those given no vanillan or vanillan at a very low dose, according to the study findings in the Journal Of Agricultural And Food Chemistry.

It’s thought vanillan targets interleukin 17A, a chemical that encourages inflammation and is believed to play a key role in psoriasis, which causes scaly patches of skin.

Researchers at China Medical University Hospital in Taiwan say as well as easing symptoms, vanilla could prevent flare-ups of the condition.

University of Edinburgh researchers have developed a blood test that can help diagnose a cause of a deadly form of stroke.

The test checks for a gene that causes cerebral amyloid angiopathy (CAA) — a build-up of protein in blood vessels, a leading cause of strokes from bleeding on the brain. Known as haemorrhagic strokes, they are fatal in about half of cases.

People who test positive for CAA are known to be at heightened risk of a stroke, and so it is hoped that this new test will help doctors better plan preventative treatment, reports the journal The Lancet Neurology.

Teenagers who regularly fall out with friends age faster than their peers, according to a 15-year study.

Scientists at the University of Virginia monitored 127 volunteers from the age of 13, asking how they got on with friends and others.

When the volunteers turned 28 they were given blood tests, which found that those who’d experienced the worst social conflict had the highest level of interleukin 6, a protein associated with cancer, arthritis and other problems associated with ageing.

According to the study in Development And Psychopathology, as neither social or economic status seemed to affect levels of interleukin 6, the results underline the need for children to learn how to resolve conflict.