Swede ‘was tortured before being killed on sub trip’

A Danish inventor charged with murdering Swedish journalist Kim Wall tied up and tortured her before killing her, prosecutors allege.

Peter Madsen, 46, is accused of using a special tool kit to brutalise Miss Wall on board his home-made submarine before either strangling her or slitting her throat in August last year.

He then dismembered her body, wrapped the parts in plastic bags and dumped them into Copenhagen harbour before scuttling his sub, the UC3 Nautilus.

Peter Madsen, 46, allegedly tied up and tortured 30-year-old journalist Kim Wall on board his submarine in August last year. He is then accused of strangling her or slitting her throat 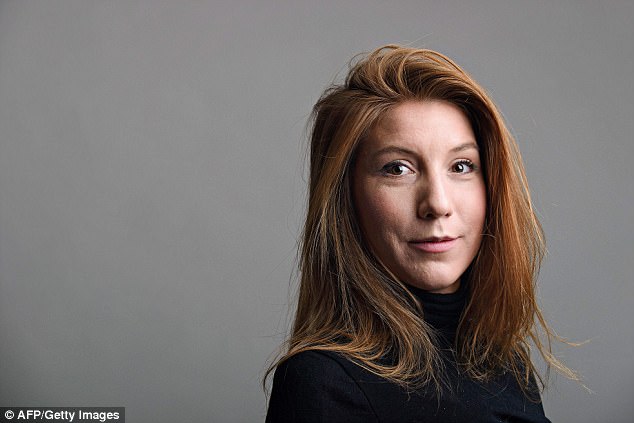 Miss Wall had agreed to go along on the maiden voyage of Madsen’s submarine in Copenhagen for a story, but disappeared. Her dismembered body parts were later found in the harbour

Madsen admits abusing her corpse but maintains Miss Wall died by accident after a hatch fell on her head while she was on board.

She had agreed to ride along with Madsen for the maiden voyage of his submarine for a story she was writing.

The charges were revealed on January 16 but without any additional details. A copy of the charge sheet has since been obtained by the Associated Press.

Madsen’s trial will begin on March 8, when he will be charged with premeditated murder as well as dismemberment and ‘sexual relations other than intercourse of a particularly dangerous nature.’ Lawyers will be seeking a life term.

Wall was last seen on August 10 boarding Madsen’s submarine for a trip around Copenhagen harbour.

In the early hours of the following morning Madsen called the coastguard to report the craft was sinking, after which it became apparent Miss Wall was missing.

Madsen initially denied any knowledge of her fate, saying he dropped her off on shore before the submarine ran into trouble.

But he later changed his account, saying she was killed by accident after a heavy hatch fell on her head.

Divers were quickly able to recover the wreck of the Nautilus from the bottom of the harbour, but found no trace of Miss Wall on board except for her underwear.

Her torso was discovered almost two weeks after she was last seen, before her head and legs were discovered in October. 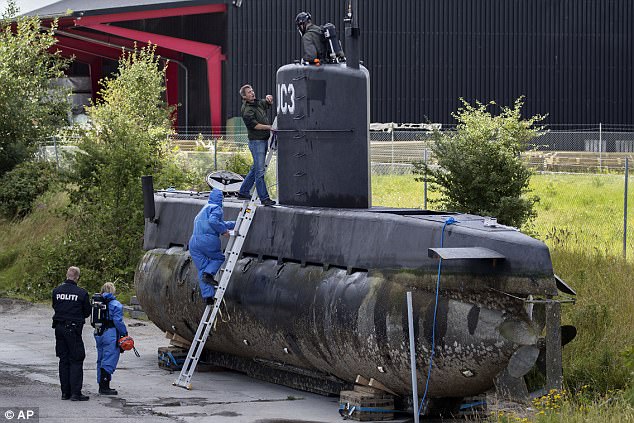 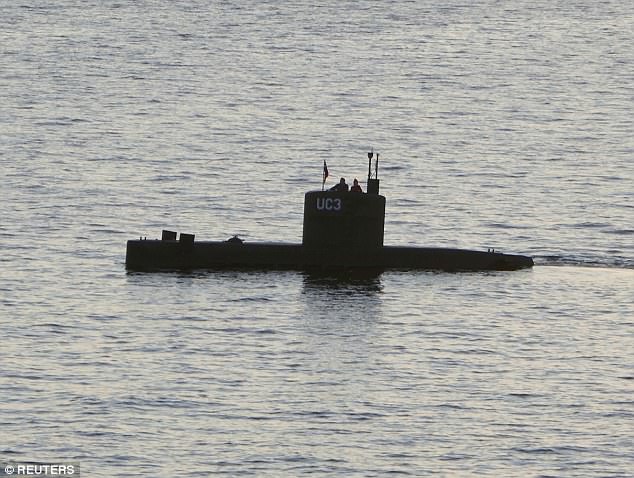 Madsen had initially denied any knowledge of Miss Wall’s fate, saying he dropped her off on shore before his submarine sank, but later changed his story (pictured, the pair on board)

Crucially, examiners said the skull bore no evidence of a fracture which would corroborate Madsen’s account.

Two arms were then discovered in the same area in November. All the body parts had been weighted down with metal.

Police also found some of Miss Wall’s clothes and a knife in one of the bags.

Madsen, who is married, denied the hard drive belonged to him and has denied any sexual relationship between himself and Miss Wall.

Prosecutors have previously said they believe Madsen killed Wall as part of a sexual fantasy, and found multiple mutilation wounds to her genitals.

Madsen is a self-taught engineer has successfully launched rockets with the aim of developing private space travel.

He is known for his occasionally foul temper and fallouts with former colleagues.

His homemade submarine Nautilus, launched in 2008, was the biggest private sub ever made when he built it with help from a group of volunteers.

But they became engaged in a long-running dispute over the Nautilus, before members of the board decided to transfer the vessel’s ownership to Madsen, according to the sub’s website.

In 2015, Madsen sent a text message to two members of the board claiming: ‘There is a curse on Nautilus’.

‘That curse is me. There will never be peace on Nautilus as long as I exist,’ Madsen wrote, according to the volunteers.

Madsen’s character is expected to be central to the murder case against him. A verdict is expected on April 25.