Sweden could have ‘herd immunity’ by next month, claims its infectious diseases chief

Parts of Sweden could achieve ‘herd immunity’ as early as next month, the country’s leading epidemiologist has said, as the death toll rises.

The Government is holding out against a total lockdown despite growing calls for ‘rapid and radical measures’ to contain the coronavirus outbreak.

Last week, it announced plans for an aggressive testing regime which could see 100,000 tests administered as the number of cases exceeded 13,000.

Speaking to local media, Dr Anders Tegnell, the architect of Sweden’s controversial strategy, claimed that the population of Stockholm – the epicentre of the country’s outbreak – could achieve ‘herd immunity’ as early as next month.

Dr Anders Tegnell, architect of the country’s coronavirus strategy, has claimed that parts of Sweden could achieve ‘herd immunity’ as early as next month (pictured, April 14, 2020) 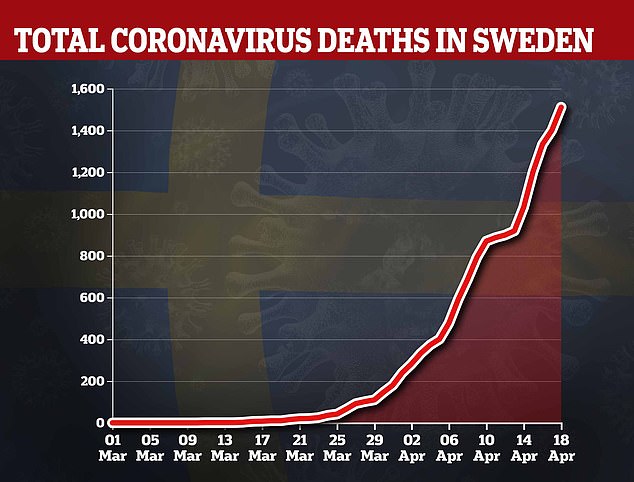 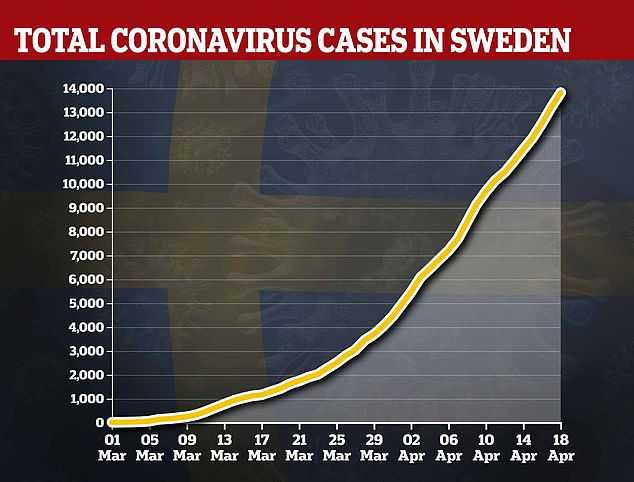 Last week, it announced plans for an aggressive testing regime which could see 100,000 tests administered as the number of cases exceeded 13,000

Dr Tegnell said: ‘According to our modellers [at the Public Health Agency of Sweden], we are starting to see so many immune people in the population in Stockholm that it is starting to have an effect on the spread of the infection.

‘Our models point to some time in May.’

He told Norwegian TV: ‘These are mathematical models, they’re only as good as the data we put into them. We will see if they are right.’

Dr Tegnell’s assessment came as the country recorded 130 deaths in a single day. By Friday, the national toll had risen from 1,333 to 1,400.

Asked about the rising number of deaths, Dr Tegnell said: ‘It is not a failure for the overall strategy, but it is a failure to protect our elderly who live in care homes.’

Sweden has been described as an ‘outlier’ as it refuses to impose an EU-style lockdown, despite its coronavirus-related death rate rising.

On Thursday, the Swedish parliament passed a new law granting the Government temporary powers to quickly adopt measures aimed at curbing the spread of the new coronavirus without prior parliamentary approval. 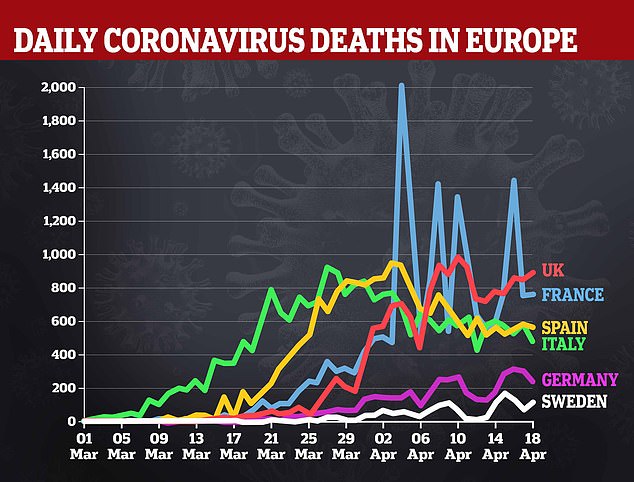 Dr Tegnell’s assessment came as the country recorded 130 deaths in a single day. By Friday, the national toll had risen from 1,333 to 1,400 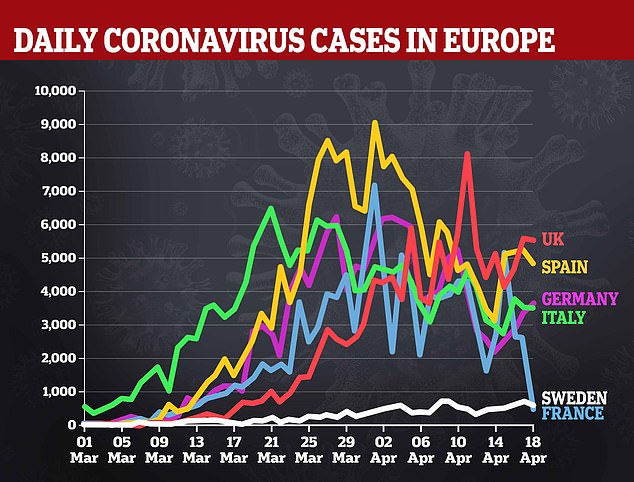 Sweden has been described as an ‘outlier’ as it refuses to impose an EU-style lockdown, despite its coronavirus-related death rate rising 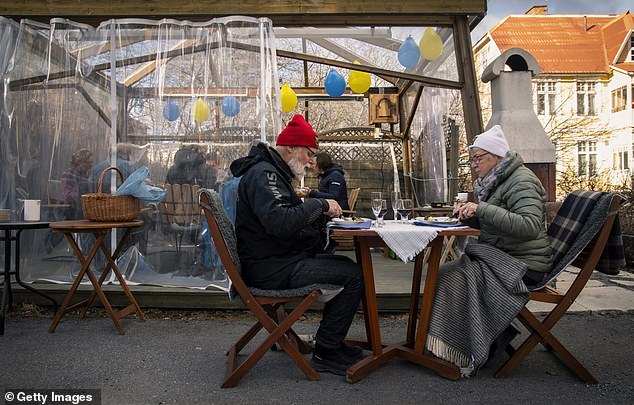 A senior couple eat dinner keeping distance from the rest of their family, as Sweden avoids a full EU-style lockdown to tackle the coronavirus (pictured, Ostersund, April 18, 2020) 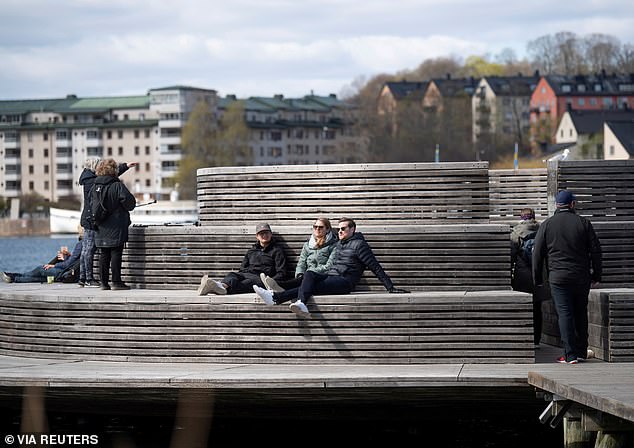 It followed mounting public pressure to emulate the response of other countries.

The new law allows the Government to close businesses, limit public gatherings or shut down ports and airports, as well as a number of other measures.

‘It is important that the Government has access to more tools in the fight against the coronavirus if they should prove necessary,’ MP Kristina Nilsson argued.

After objections from opposition parties, the bill was amended so that if the Government decides to enforce any measure quickly without going through parliament, lawmakers can vote to rescind the measure if they deem it unnecessary.

The new powers came into force yesterday and last until the end of June.

The Government is still prohibited from adopting measures that curtail rights guaranteed by the country’s constitution, meaning it would still need to go through parliament to issue the type of curfews seen across continental Europe.

However, it has not pursued such measures, opting for a softer approach and calling for citizens to take responsibility to follow social distancing guidelines.

The Government has banned gatherings of 50 people and barred visits to nursing homes. It also banned non-essential travel to Sweden from outside the EU. 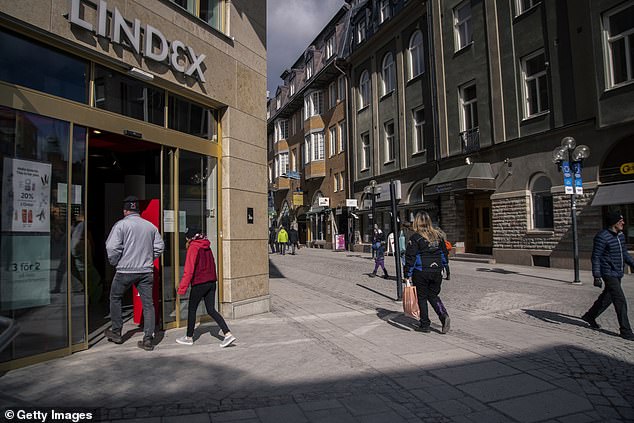 Pedestrians walk through a Stockholm street amid the coronavirus pandemic (April 18, 2020) 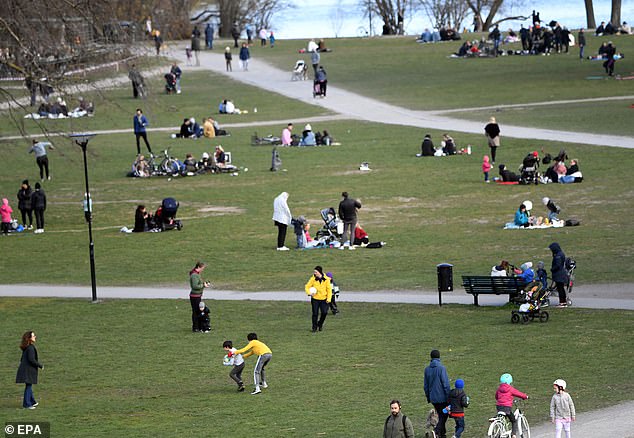 People meet playing ball, having picnics and enjoying the spring weather at the Raslambshovsparken park in Stockholm (pictured, April 18, 2020)

Some of the country’s top epidemiologists hit out at the Public Health Agency of Sweden, claiming it and the Government was ‘not at all prepared’ for a pandemic.

‘The authorities and the Government stupidly did not believe that the epidemic would reach Sweden at all,’ Bo Lundback, a professor of epidemiology at the University of Gothenburg, alleged this week.

Prof Lundback and 21 other researchers urged the Government to reconsider and institute ‘rapid and radical measures’ in a joint article in Dagens Nyheter newspaper.

‘Sweden was poorly or even not at all prepared,’ Prof Lundback added.

But officials insist their plan is sustainable in the long-term, rejecting drastic short-term measures as too ineffective to justify their impact on society.

Dr Tegnell has defended his limited interventions, telling The Mail on Sunday that he believed that Britain’s lockdown had gone too far. 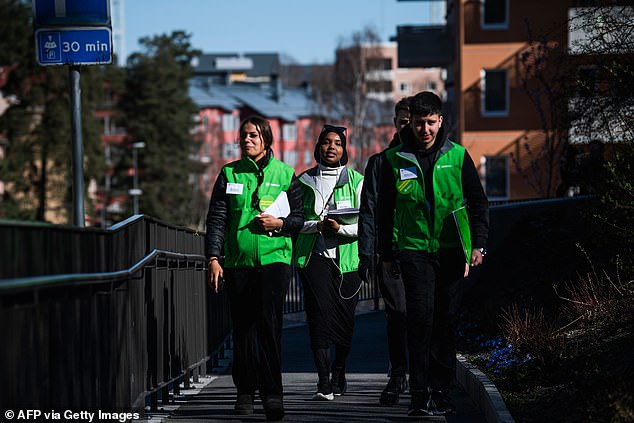 Teenagers hired by the municipality hand out information flyers in different languages to local people in Jakobsberg, near Stockholm during the pandemic (pictured, April 9, 2020) 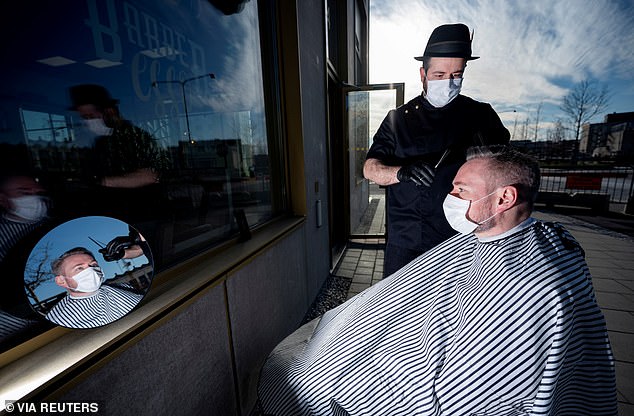 He told the paper that Sweden was ‘following’ the UK’s original approach of resisting lockdown, and was ‘disappointed’ by Britain’s abrupt U-turn.

‘I am very sceptical of lockdowns altogether but if you ever do them, you should do them at an early stage,’ Dr Tegnell claimed.

He added: ‘So far, what we are doing is working. In a sense we are beating it, and I am confident we are doing the best we can in the circumstances.’

Dr Tegnell has described the virus as a manageable risk, saying: ‘I still go to restaurants. We can’t kill all our services.

‘And unemployed people are a great threat to public health.

‘It’s a factor you need to think about.’

Sweden’s economy is also projected to shrink by 4 per cent as the world economy grinds to a standstill – also despite remaining mostly ‘open’.

Its central bank has said that proposed changes to the law governing how it operates would limit its capacity to take action in a crisis.

The risks to the Swedish economy could be greatly amplified, it concluded.

An inquiry last year suggested changes to legislation governing the Riksbank, clarifying which policy tools it should have, codifying its role in maintaining financial stability and giving parliament the final say over the inflation target. 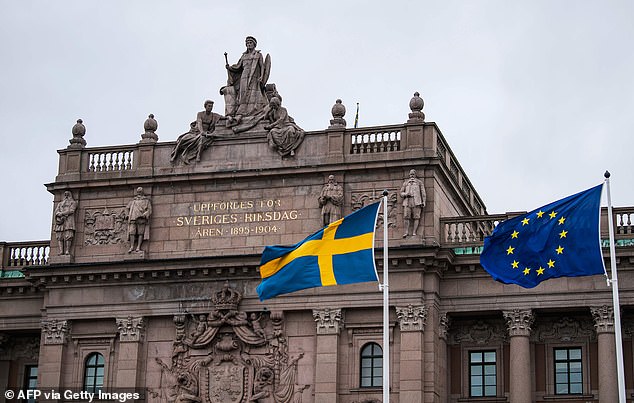 The Swedish and EU flags fly in front of the Swedish Parliament (pictured, April 16, 2020)

The proposed changes were widely seen as clipping the wings of the Riksbank, which has wide scope for independent action under current rules.

‘The legislative proposals mean the Riksbank would have less capacity to decide over and use all of its tools and this would reduce the Riksbank’s capacity to act quickly, flexibly and effectively,’ the central bank said in a statement.

The Riksbank said that if the current proposals had already been in place, it would have made its response to the novel coronavirus less effective.

The Riksbank General Council, a group of 11 parliamentary appointees that oversee the central bank, also criticised the proposals. 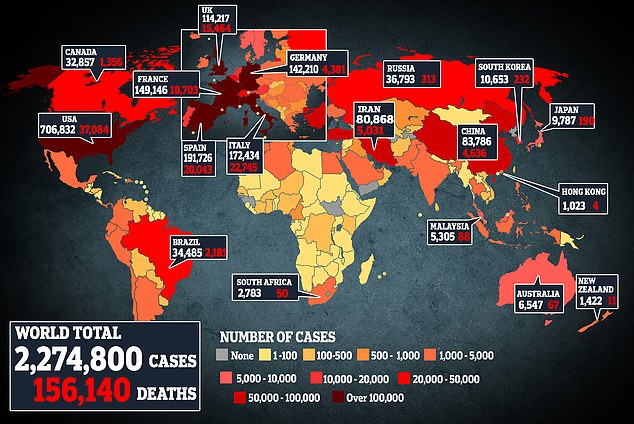