While many children around the globe are still basking in the long days of summer, for Princess Estelle of Sweden, the school gates are already open.

The young Swedish royal looked ready for her first day in Year One in a photo posted by Crown Princess Victoria to the royals’ official Instagram account.

Clearly proud of her eldest child, who’s seven, Crown Princess Victoria, 42, wrote: ‘Time for the call! Today, many children are returning to the books – so is Princess Estelle, who is now starting in grade 1.’

The accompanying image showed the blonde-haired youngster standing in front of a tree with her hair loosely tied back, wearing a light blue dress.

Ready for lessons! Crown Princess Estelle smiles for a back-to-school photo taken by her mother Crown Princess Victoria of Sweden ahead of the first day of a new term 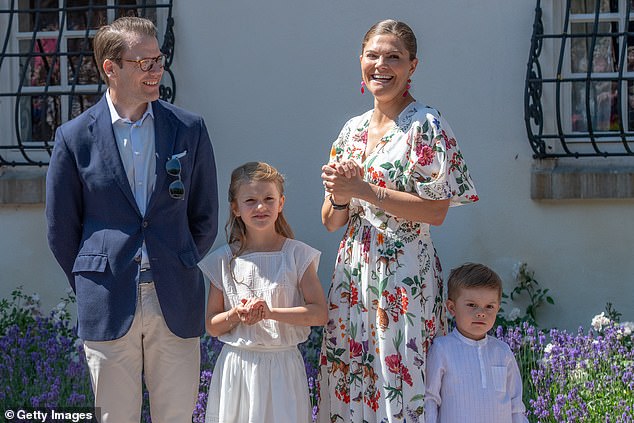 Back in July, the family, from left: Prince Alexander of Sweden, Estelle, Crown Princess Victoria and Oscar, posed for this portrait during Victoria’s 42nd birthday celebrations in July at Solliden Palace in Borgholm, Oland, Sweden 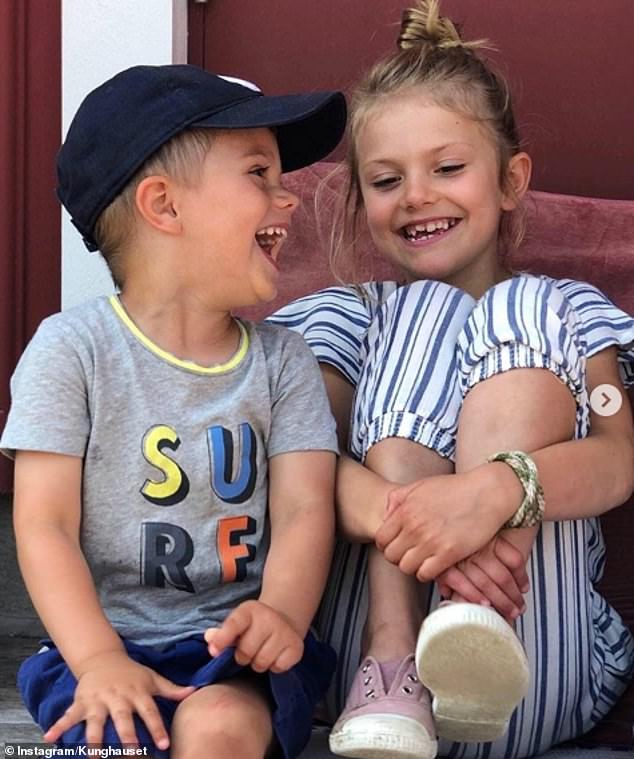 Summer fun: Estelle and younger brother, Oscar, three, are seen grinning in a photo taken during a family trip to West Sweden during the school break

The family have enjoyed a relaxing, mostly Swedish-based summer with Crown Princess Victoria posting a photo last month of Estelle and her three-year-old brother Oscar, officially the Duke of Skane, smiling while on a family vacation to the country’s west coast.

A year has whizzed by since Estelle started her first day at Campus Manilla, one of Stockholm’s most exclusive educational establishments.

Children in the Scandinavian country tend to start school later in the UK, with emphasis put on allowing children time to play before they begin learning in earnest.

Campus Manilla, based on the Stockholm island of Djurgården, was founded by property mogul Knut Pousette in 2013 with funds from private backers. The school now attracts some of the capital city’s most wealthiest families.

Crown Princess Victoria, heir to the Swedish throne, has shown she’s a good sport, setting a playground alight earlier this year when she was filmed performing viral dance move ‘the floss’ with hoards of children.

Victoria, Crown Princess of Sweden, 41, was visiting Härjedalen on a hiking adventure, where she met local students and hiked with the general public. 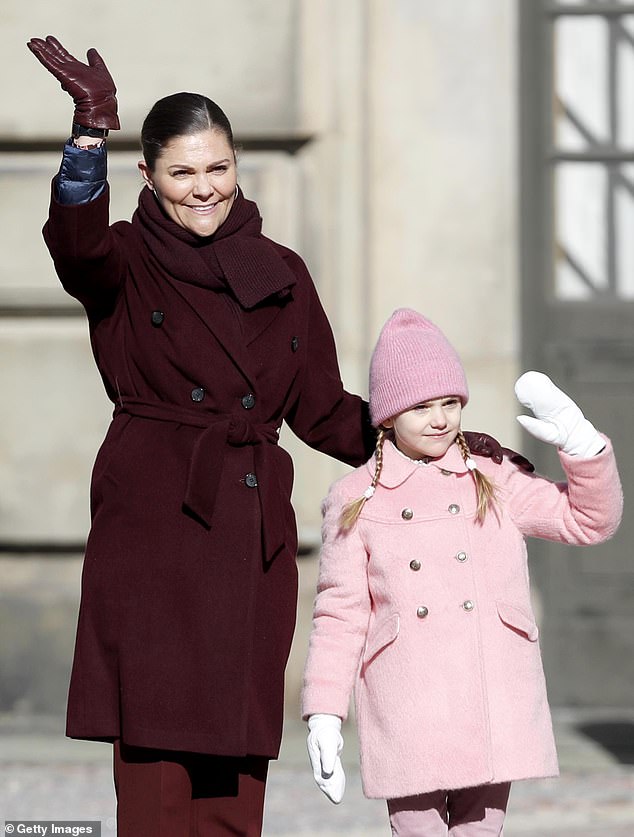 The Crown Princess and her daughter Estelle, pictured in Stockholm earlier this yea

While meeting the youngsters, she impressed them with her ‘flossing’ dance moves.

The dance went viral last year after it was performed by The Backpack Kid, and became a global sensation, wracking up millions of views online and thousands of playground copy cats.

The mother-of-two regularly takes walks with the Swedish public through the country’s stunning landscapes.  It’s part of an effort to visit all 25 provinces, and take in their scenery.

Victoria is the eldest child of King Carl XVI Gustaf and heir apparent to the Swedish throne.