Residents have been left baffled after it was revealed the roof of their homes has was graffitied with the silhouettes of a giant penis and breasts.

Birds-eye photographs published on a local Facebook group revealed images of a penis on the roof of one of the apartment blocks in northern Stockholm.

A couple of doors down from the phallus-adorned roof, another building appears to be decorated with a pair of breasts.

The images of the ‘private’ housing have now gone viral after being shared on social media and among the Swedish press.

Maria Sjogren, a resident in one of the apartment blocks in Blackeberg, Bromma, said she found out about the bizarre features after a friend shared the Google Earth images on Facebook.

She told The Local: ‘Our family lives in the penis house. I don’t have any immediate opinions, but it’s quite fun. We would like to know the background and reason for the artwork.

‘I haven’t had contact with the landlord myself, but heard that neighbours have, I don’t know what their answer was.’

The two buildings in the Swedish suburb were designed by architect Dinell Johansson and completed in 2016. There is no detail on the website which suggests the unique artwork was part of the plan.

The company said they would not comment on who was responsible for the artwork or whether it was planned. They told The Local: ‘We have chosen not to comment on the decor of any of our buildings.’ 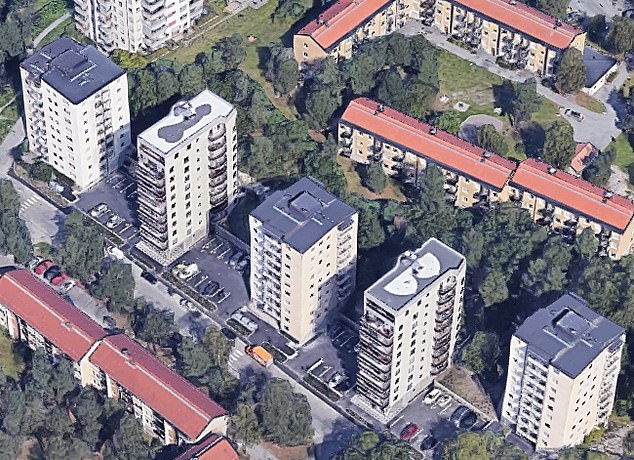 It is not the first time a rogue graffiti artist has turned their attention to scribbling genitalia on buildings in Sweden.

A blue penis was painted onto the side of a building in Kungsholmen, central Stockholm, as part of a mural on homes.

The artwork typically remains in place for a six month period but it was taken down due to the high number of complaints.

Authorities in the Värmland region appealed to the public for information after a large wooden penis was found in a tree.

But perhaps the most famous work in the genre was the Gothenburg snow phallus that appeared on a frozen moat in the western city. A cleaning company removed the offending artwork, prompting a backlash and a new, even bigger snow penis to be created in its place.