Popular Canadian ice cream brand Sweet Jesus has come under fire for its ‘blasphemous’ name and ‘mockery’ of religious symbols, as thousands of Christians demand a boycott of the company following its expansion into the United States.

The ice cream parlor, which was founded in Toronto by Andrew Richmond and Amin Todai in 2015, is facing a call to action from Christian communities who want people to boycott the brand — but the company is refusing to change its name.

One petition posted on the conservative advocacy group CitizenGO has received more than 11,000 signatures following its claims that Sweet Jesus is ‘all about trashing Christianity and mocking the saving work of our Lord Jesus Christ.’

Under hellfire: Canadian ice cream brand Sweet Jesus is facing backlash from critics over its ‘blasphemous’ name and ‘mockery’ of religious symbols 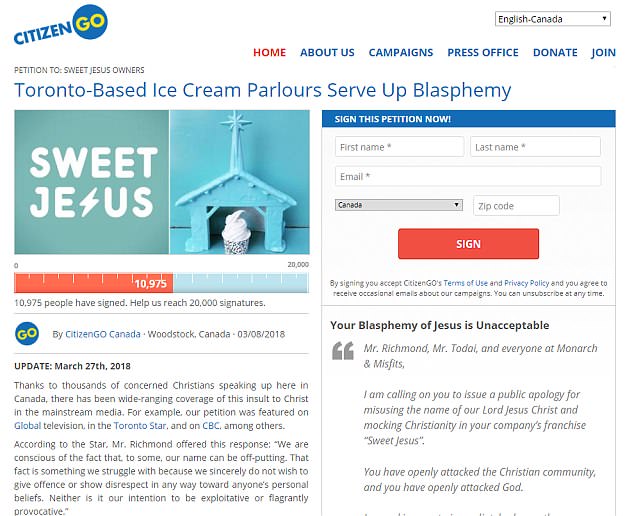 ‘Serve Up Blasphemy’: One CitizenGO petition, which has received more than 11,0000 signatures, calls for a boycott of the popular ice cream brand that was founded in 2015

‘Choosing the name of our Lord for a brand of soft-serve ice cream is totally offensive and revolting,’ the petition reads. ‘Both in their promotional materials and menu selection, it is plain to see that Richmond and Todai have every intention of mocking Christ and Christianity. If anything could qualify as “hate speech,” this is it!’

The petition points out the names of some of Sweet Jesus’ ice cream flavors, including ‘Red Rapture,’ ‘Hella Nutella,’ and ‘Sweet Baby Jesus.’

It also references a blog post on Activist Mommy calling out the company logo that features an ‘SS style “S”, popular among equally blasphemous and Satanic metal bands of the ’70s and ’80s, and an upside down cross.’

Meanwhile, a Change.org petition demanding that Sweet Jesus change its name and remove its ‘offensive Antichrist imagery immediately’ has received more than 2,000 signatures. 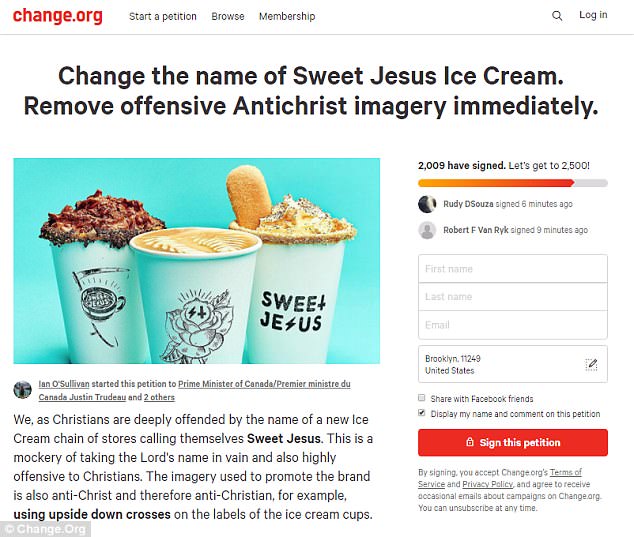 A Change.org petition demands that the company changes its name and removes its ‘offensive Antichrist imagery’ following the company’s U.S. expansion 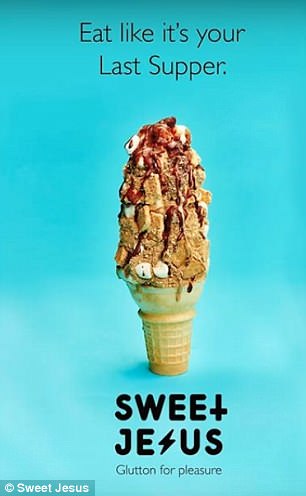 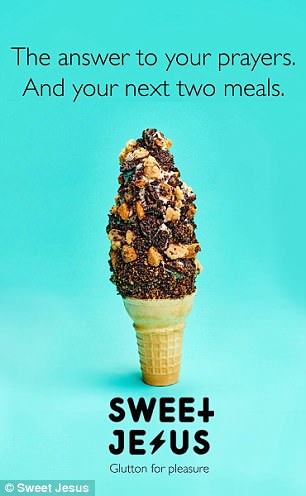 Are you laughing? Ads for the brand features cheeky spins on religious references, including taglines such as ‘Eat like it’s your Last Supper’ and ‘The answer to your prayers’

This petition argues that the brand is ‘highly offensive to Christians, noting that a similar company named after Muhammad would never be allowed.

‘God forbid the name of the prophet Muhammed was used in this manner or the name of Allah against Muslims. So why is it that the name of Jesus Christ can be openly mocked in our so called fair, equal, and democratic society?’ it asks.

Sweet Jesus has 19 locations in Canada, one location in Baltimore, Maryland, and a second U.S. location slated to open at the Mall of America in Minnesota.

Ads for the brand features cheeky spins on religious references, including taglines such as ‘Eat like it’s your Last Supper’ and ‘The answer to your prayers, and your next two meals.’ 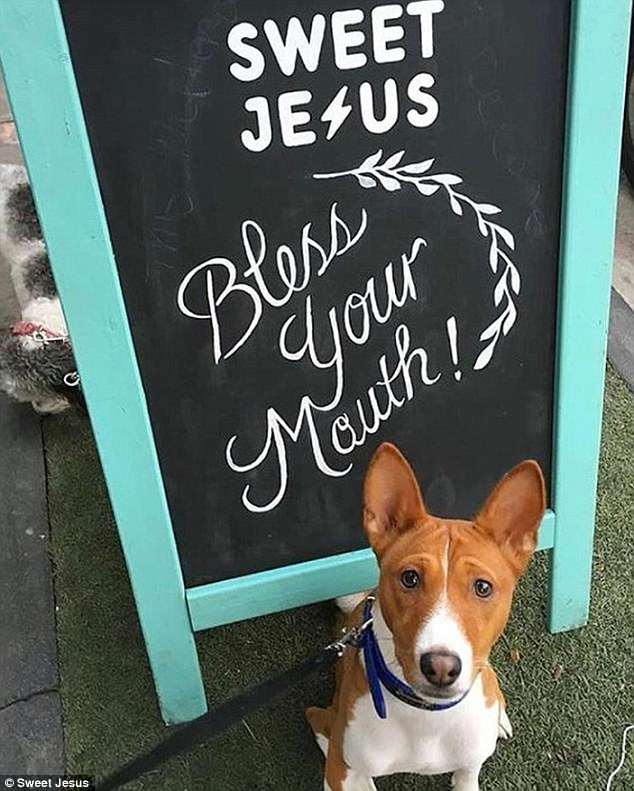 #Blessed: The ice cream parlor has 19 locations in Canada, one in Baltimore, Maryland, and a second U.S. location slated to open at the Mall of America in Minnesota 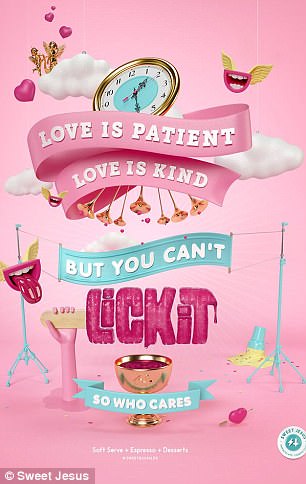 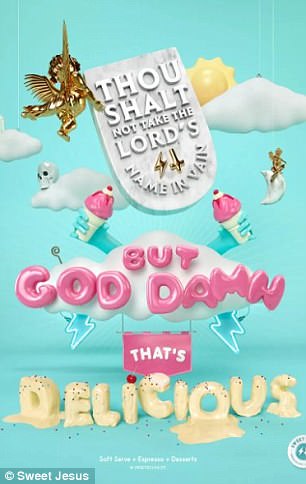 Critics have slammed the company over its use of religious imagery, including these ads featuring Bible verses and mentions of the Ten Commandments 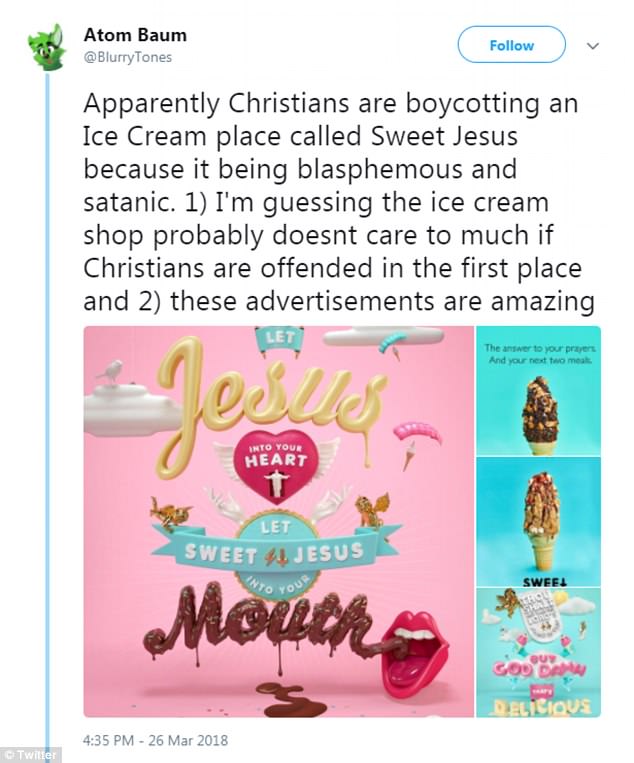 This person’s a fan: However, despite the controversy, some people think the ads are hilarious 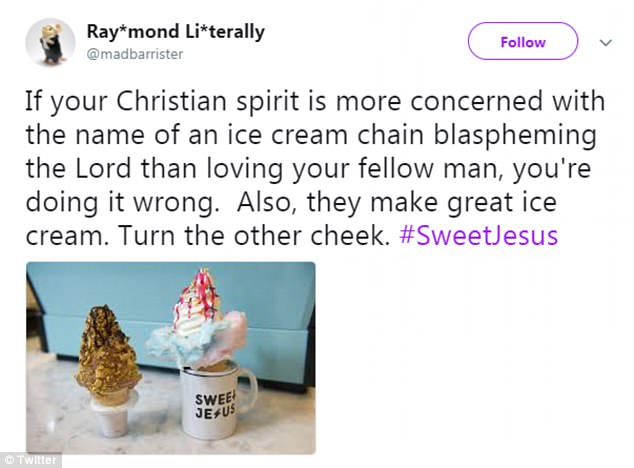 ‘They make great ice cream’: A Sweet Jesus fan named Raymond noted that Christians should be more concerned about loving their fellow man

Although critics insist the name of the brand is mocking Christ, Richmond explained in a statement to The Star that it was inspired by the popular phrase ‘Sweet Jesus,’ which people often use to express joy and surprise.

‘We are conscious of the fact that, to some, our name can be off-putting,’ he explained.

‘That fact is something we struggle with because we sincerely do not wish to give offense or show disrespect in any way toward anyone’s personal beliefs. Neither is it our intention to be exploitative or flagrantly provocative.’

Although the company considered changing it’s name, it ultimately refused to give in to the pressure. 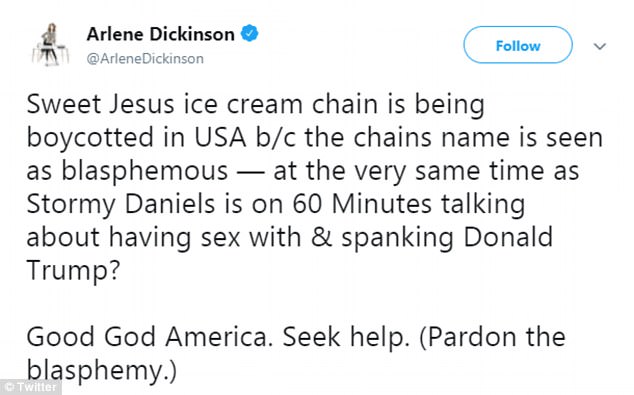 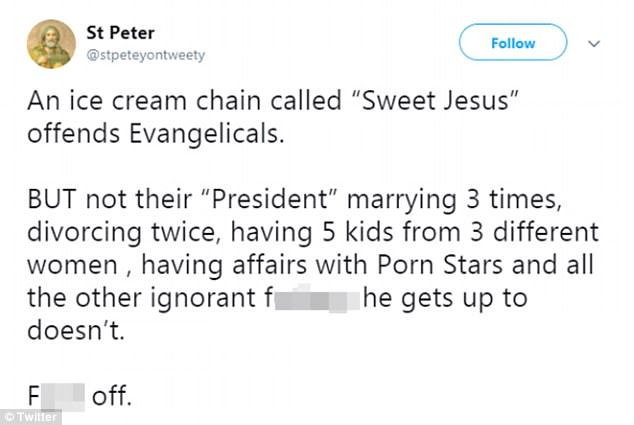 Not having it: One Twitter user argued that U.S. Evangelicals are offended by an ice cream chain’s name, but not the actions of their president

Up in arms: Father James Mallon called out the results of Toronto Star’s poll in which 62 per cent of respondents said the name is ‘harmless fun’

Moot point: Someone named Silvia hit back that ‘sweet Jesus’ is a common phrase 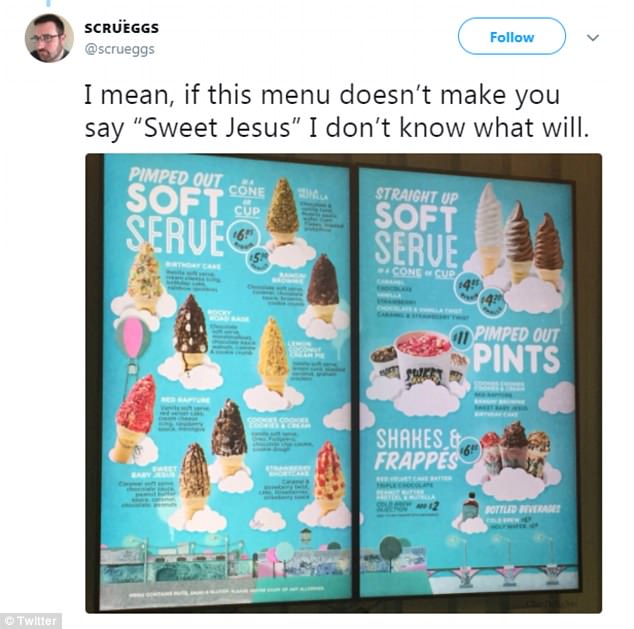 Laughing it off: One Twitter user posted a picture of the ice cream shop’s menu, joking that it will make you say ‘Sweet Jesus’

Ironic: He also joked about many critics are the same people who complain that ‘people are such snowflakes nowadays’

‘After a lot of thought, we have decided that we will not make a change,’ Richmond said. ‘The best brands come from an honest place. Sweet Jesus is an honest reflection of our experiences and that of our customers and how they react when they try our product.

‘In our experience, the majority of people understand that we’re not trying to make a statement about religion.’

As the petition controversy continues to make headlines, people have been taking to Twitter to defend the company and call out hypocrisy.

‘Sweet Jesus ice cream chain is being boycotted in the USA b/c the chains name is see as blasphemous — at the very same time as Stormy Daniels is on 60 Minutes talking about having sex with & spanking Donald Trump? Canadian business woman Arlene Dickinson tweeted. ‘Good God America. Seek help. (Pardon the blasphemy.)’ 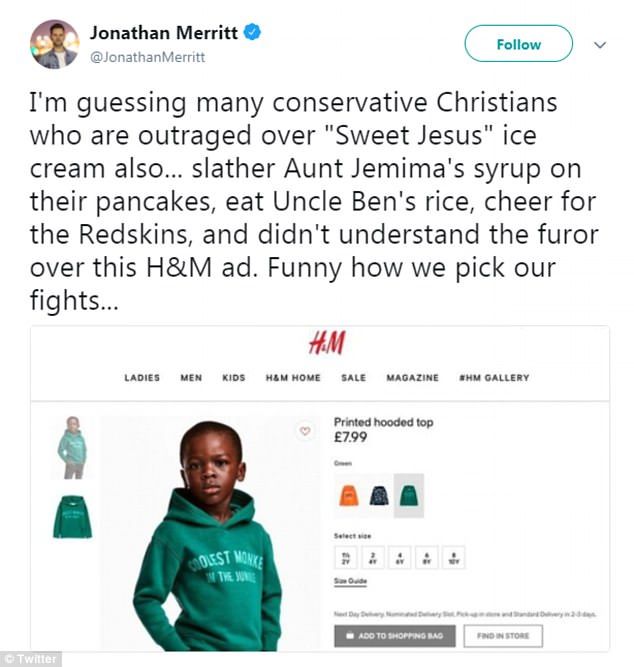 ‘Funny how we pick our fights’: Jonathan Merritt also found the outrage to be hypocritical Loving it: Someone known as CK joked that she would eat Sweet Jesus ice cream ‘religiously’

Can’t even: Twitter user Toronto Mike found the controversy to be frustrating

And someone known as CK joked: ‘If we had Sweet Jesus ice cream in Indiana, I’d eat it religiously.’

Meanwhile, Father James Mallon called out the results of Toronto Star’s poll in which 62 per cent of respondents said the name is ‘harmless fun,’ writing: ‘Now imagine the results if the place was called ‘Sweet Mohammed [sic].’

‘But the term ‘sweet Jesus’ is an actual phrase used by our culture as an expression of joy,’ someone named Silvia hit back. ‘I am unaware of a Muslim phrase like this. Sorry your argument carries no weight @FJMallon.’