Sweeteners ARE safe and they DON’T make you hungrier

Barely a day goes by when we aren’t reminded of the dangers of the S word – sugar. And as a public health nutritionist, I can see why.

Sugar is undoubtedly one of the main factors underpinning the obesity crisis, not to mention the soaring number of children having dental extractions.

It’s just everywhere – not only in obvious things like cakes and biscuits, but cereals, bread, shop-bought soups, sauces and even salad dressings.

It’s also not just about obesity and dental health; sugar most definitely contributing to the rising rate of type 2 diabetes.

Thankfully, sugar reduction now dominates the nutrition agenda, with policy makers and health professionals ramping up pressure to slash the sugar content of our diets, mainly through the use of sweeteners, which have been embroiled in controversy amid fears they can lead to obesity, diabetes and even dementia.

Time and again, there are things I hear about sweeteners that are wrong, which puts people off using them.

This is based on the idea that eating something sweet tells our body to expect calories, stimulating digestive activity and insulin release in readiness for the anticipated surge in blood sugar levels.

However, when another team of scientists tried to replicate this, they found the opposite was true.

They also showed the original study was flawed because the subjects that didn’t like saccharin were excluded, leaving a self-selected group which was also more likely to gain weight.

Frequent exposure to sweet flavours promotes a preference for them and over-stimulates sugar receptors, encouraging cravings. The success of salt reduction in processed foods is sometimes used to support this argument.

Truth: There is, though, little direct evidence to support these statements. A paper published last year in the Proceedings of the Nutrition Society by Professor Peter Rogers, at the University of Bristol, points out that if this theory was correct, swapping drinks made with low-calorie sweeteners for water would reduce our preference for sugary foods/

Myth: Low-calorie sweeteners encourage us to overcompensate for ‘calories saved’.

This is based on the idea that we give ourselves permission to eat or drink more when we choose low-calorie options — and end up maintaining, or even increasing, our calorie intake.

Truth: Again, the Roger’s paper says there is evidence that we eat more when we are told a food is ‘healthier’, but we eat less when we know how many calories it contains and long-term studies also found that knowing whether or not low-calorie sweeteners were being used made no difference in weight loss.

Studies show that using a low-calorie sweetener in place of some sugar in the diet reduced calorie intake and body weight. 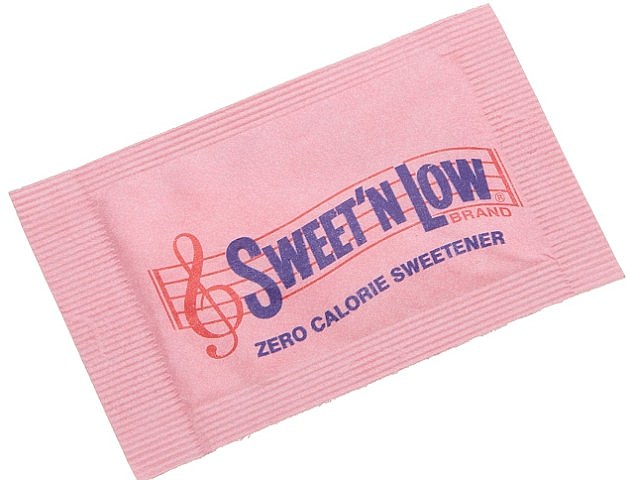 GETTING SUGAR OUT OF OUR DIETS

While getting people to eat a healthy balanced diet remains the ultimate objective, we have to be realistic that this is a long-term measure.

Habits are ingrained and we need to educate people about how much sugar is lurking in many of their favourite foods. Plus, most of us enjoy sweet treats now and again.

One easy way of tackling high sugar intakes is encouraging people to switch to foods and drinks that are made with low-calorie sweeteners rather than regular sugar.

Studies show that switching to foods and drinks which contain low-calorie sweeteners instead of sugars may help weight management, control blood sugar rises after meals and help protect teeth.

WHAT ARE THE FEARS OVER SWEETENERS? AND WHAT DOES THE SCIENCE SHOW?

In an era of obesity and diabetes, there is more focus on sweeteners and sugar alternatives than ever before. But some in the scientific community say the jury is still out on the effects of sweeteners and more research is needed.

A study published in April this year from the Medical College of Wisconsin and Marquette University linked artificial sweeteners to obesity and diabetes, claiming sweeteners change how the body processes fat and uses energy.

Leading gut microbiome expert Professor Tim Spector, professor of genetic epidemiology at King’s College, has warned that if you give animals lots of sweeteners, you get a reduction in diversity of the microbes and they produce abnormal chemicals – different metabolic signals which have been shown to be more likely to give you diabetes and make you put on weight.

He adds that while there’s no hard evidence yet in humans, he has seen enough to make him wary of regularly eating these additives.

Consuming a can a day of low-or no-sugar soft drink is associated with a much higher risk of having a stroke or developing dementia, researchers claimed last year.

A Boston University study found that people who glugged diet drinks daily were almost three times as likely to develop stroke and dementia when compared to those who did not.

However, the researchers were quick to point out that these findings, which appear separately in the journals Alzheimer’s & Dementia and Stroke, demonstrated correlation but not cause-and-effect.

Indeed, you could save a staggering 27,000 calories a year just by switching from sugar to low-calorie sweetener in hot drinks like tea and coffee.

How? Well, one teaspoon of sugar provides 20 calories, compared with no calories in a low-calorie sweetener such as Hermesetas mini tablet.

So, for the average adult drinking four hot drinks daily, with each containing one teaspoon of sugar, this would save them around 80 calories a day, 560 calories a week, 2,240 calories a month and 26,880 over a year.

Meanwhile, a review of 16 studies published in the Nutrition Bulletin in 2006 revealed that simply switching sugar for low-calorie sweeteners reduced average daily calorie intake by 10 per cent and led to a statistically significant weight loss of 0.44lbs (0.2kg) per week.

The researchers equated that over a year, the potential weight loss could equate to 22lbs (10kg)  for a 165lbs (75kg) person.

An analysis published in the American Journal of Clinical Nutrition in 2014 included an evaluation of 15 randomised controlled trials where sugar had been replaced with low-calorie sweeteners.

The authors concluded that ‘substituting low-calorie sweeteners options for their regular-calorie versions may be a useful dietary tool to improve compliance with weight loss or weight maintenance plans’.

Not only that, but there is a wealth of evidence to show that low-calorie sweeteners can significantly help type 2 diabetics control or even lower their blood sugar – helping to lower the risk of complications such as sight loss, nerve damage and even limb amputation.

In fact, there is an EU authorised health claim that low-calorie sweeteners ‘maintain reduction of postprandial glycaemic responses’ – in a nutshell, that means they help to maintain your blood sugar levels after meals, rather than sending them soaring as sugar does.

And when it comes to dental health, unlike regular sugar, low-calorie sweeteners do not produce acid from oral bacteria – and research shows they are therefore less likely to erode tooth enamel and/or cause cavities.

Because of this, the European Union has approved the health claim that ‘low-calorie sweeteners can maintain tooth mineralisation by reducing tooth demineralisation’. 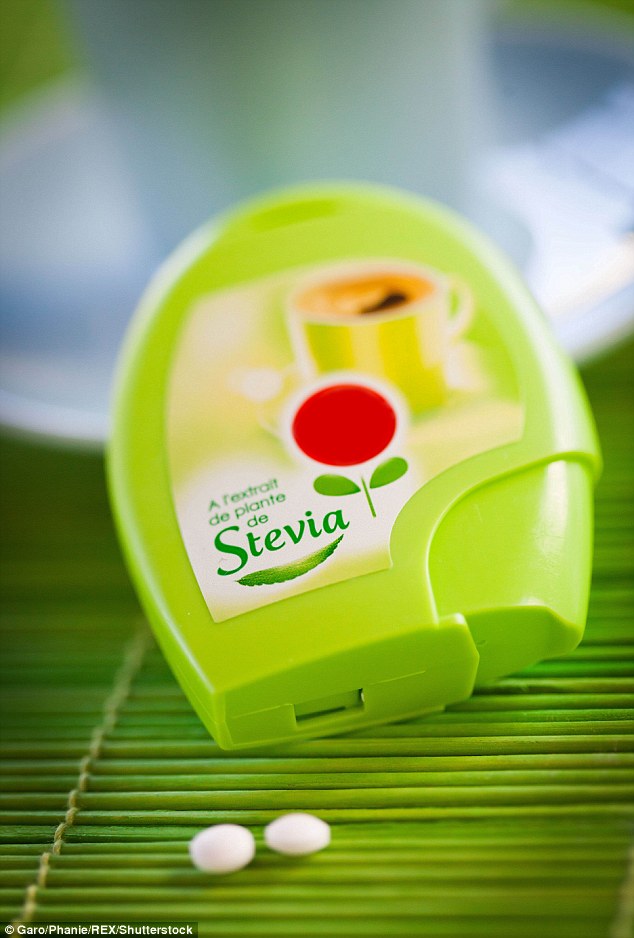 Low-calorie sweeteners have been rigorously evaluated and even been awarded two European health claims: one for maintaining a reduction in blood sugar levels after meals, the other for helping to protect teeth from damage

READING THE LABEL: WHAT ACTUALLY ARE LOW-CALORIE SWEETENERS – AND WHAT’S YOURS MADE OF?

Saccharin (E954) is one of the oldest low-calorie sweeteners on the market and has been used to sweeten foods and drinks since the 1900s.

Low-calorie sweeteners such as saccharin are now the most thoroughly tested and well-evaluated food additives used today.

In terms of consumption volume, saccharin-based sweeteners, like Hermesetas, represent over half of all sweeteners consumed, and they have been used for the longest period of time.

Saccharin has undergone several rounds of risk assessment by the European Food Safety Authority (EFSA) and also the Food and Drug Administration (FDA) in the United States.

Concerns including those relating to carcinogenicity, glycaemic control, body weight control and gut microbiota have been found to be groundless, by EFSA and the FDA.

Stevia is a zero-calorie sweetener made from steviol glycosides – naturally occurring plant compounds.

The most commonly used steviol glycosides, stevioside and rebaudioside A, are extracted from the leaves of Stevia rebaudiana Bertoni, a plant native to Paraguay where the leaves are used traditionally to sweeten foods and drinks.

Stevia extracts taste 200-300 times sweeter than sugar, which means that only very small amounts are needed.

After decades of testing, Stevia was approved in Europe in 2016 and is now used in a wide range of products.

Sucralose is an artificial sweetener that can also be used as a sugar substitute. It is made by replacing three hydrogen-oxygen groups on sugar molecules with chlorine atoms instead, giving it an intense sweet taste.

This tends to be found in yoghurts, flavoured milks, cereals, and lighter options – such as reduced calorie baked goods or ice cream.

The US approved sucralose in 1998, with the EU giving approval two years later. Sucralose has not been found to affect tooth decay and has less of an impact on blood sugar levels compared with sugar.

The European Food Safety Authority concluded in 2011 that consuming food and drink containing sucralose instead of sugar may protect teeth and help with blood pressure and blood sugar control.