Swim-credible! Salt mouth, float bloat, sea ulcers… and even if you finish, you might drop dead

Your tongue swells so thick that it can block your breathing, your flesh cracks into open sores and your torso bloats into grotesque proportions. Even if you reach dry land, there’s still the threat of a sudden deadly collapse called ‘afterdrop’.

Then, of course, there are all the gruelling hours struggling against freezing water while falling victim to vicious jellyfish stings. Just to make things even worse, there is often the need to vomit between strokes.

These are only a few of the physical challenges that constantly threaten to sink ultra-marathon swimmers such as the American Sarah Thomas.

But yesterday the 37-year-old from Colorado became the first person to swim across the English Channel an astounding four times in a row, non-stop.

Pictured: American swimmer Sarah Thomas, 37, who has become the first person to swim across the English Channel four times in a row

She set her record only a year after completing treatment for breast cancer, during which the blisters and burns from radiation therapy had made it too painful to swim.

She began her cross-Channel swim in the early hours of Sunday and finished 54 hours later at 6.30am yesterday morning after swimming around 130 miles against strong tides.

Her mother Becky Baxter described her daughter as a ‘freak of nature’, although she claimed that Sarah suffered ‘a lot of trouble with stomach ache’ during her mammoth swim.

Here are just some of the other immense physical challenges with which she had to contend.

At the end of her record-breaking feat, Sarah croaked that her worst problem was ‘dealing with the salt water… it really hurts your throat, your mouth and your tongue’.

At its most extreme, this condition, called salt mouth, can strip skin from the tongue and throat, causing inflammation and swelling, robbing swimmers of their ability to swallow.

If they cannot swallow, they cannot take on vital food and water to fuel their exertions. That is why salt mouth is one of the main reasons such attempts in the sea end in failure.

Some ultra-marathoners regularly swill with ‘barrier’ substances such as coconut oil. Others swear by soothingly sweet items such as tinned peaches and jelly babies.

Even getting small cuts and scrapes can become a big problem because salt water stops scabs forming.

Long-distance swimmers call these chronic wounds ‘sea ulcers’. They can take months to heal. With repeated swimming, they grow into deep fissures and can become infected. Water high in salt such as the Channel’s can cause such wounds when the mineral dries on sun-exposed skin and becomes abrasive.

Ultra-marathoners try to protect themselves with lubricants such as petroleum jelly — though this wears off after only a few hours in the water.

HELL OF A SWELL

Channel swimmers all tend to look remarkably similar under swimming caps when they finally stagger from the sea. That’s because their faces and bodies have become vastly swollen.

The medical term for this is ‘third spacing’. It is caused by bodily fluids migrating into the spaces between skin and the tissues underlying it. Doctors see this most often in burns and haemorrhages. But it also happens when a body is immersed for hours because the water is absorbed through the skin. The longer a person is in water, the more bloated they become. Third-spacing does little to affect performance, though it weighs swimmers down.

The bloating usually shrinks within hours of stopping. The swimmer, though, will go to the loo a lot to rid themselves of all that fluid. 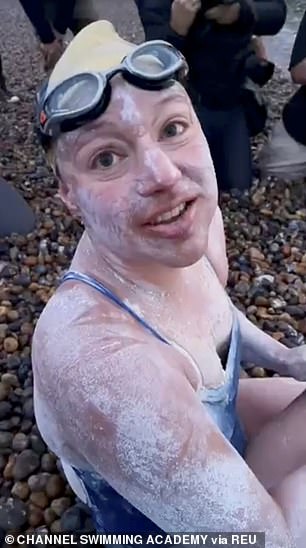 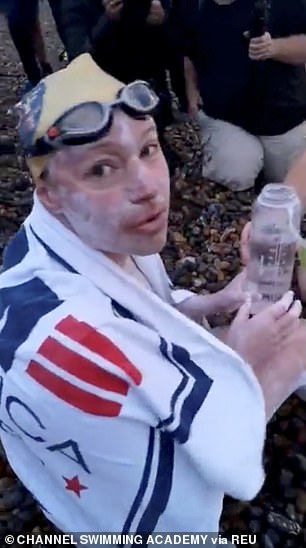 Sarah’s feat of 54 hours in water at temperatures of around 17C is astounding, even in the world of endurance cold-water swimmers.

Channel Swimming Association rules permitted her to wear only a swimsuit. Nevertheless, she casually announced: ‘It wasn’t as cold as I thought it might be but it was still chilly.’

Her ability to survive comes down to years of practice — plus the mammalian diving reflex. This constricts blood vessels in the skin, redirecting blood from the body’s surface, helping to preserve the body’s core temperature in cold water. Muscles may tire more quickly through lack of oxygen but extreme fitness can overcome this.

Just to make things a little more difficult, Sarah was stung in the face by a jellyfish.

Plagues of the creatures have brought numerous marathon swimming attempts to a premature end.

In June last year, Phia Steyn, from South Africa, aborted her attempt to become the first woman to swim from the Outer Hebrides to the Scottish mainland after falling foul of thousands of jellyfish. 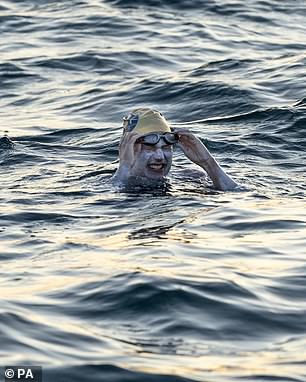 The dramatic reduction in bloodflow to the surface of the body may protect against hypothermia while in the water. But this survival mechanism can cause a potentially lethal backlash once the swimmer is standing up again in comparatively warm air.

According to a 2014 report in the British Medical Journal, in this state the swimmer’s warm blood quickly returns to their extremities, turning their skin lobster pink. The danger is that this rush of blood from the organs can cause a plummet in core temperature.

Competitors call this sudden-onset of internal hypothermia ‘the afterdrop’. They warn that it is to blame for numerous deaths among open-water swimmers.

Extreme endurance athletes have up to six times the normal risk of developing a heart disorder called atrial fibrillation.

During atrial fibrillation, the heart’s pumping becomes irregular and less efficient, which can lead to blood clots that can cause strokes.

The problem is caused when endurance swimming keeps the heart beating at a high rate for hours, which can cause the atria — the upper chambers of the heart — to stretch.

Long-distance swimming may pose an additional risk because the athlete is lying flat instead of standing up, which puts more pressure on the heart.

Long-distance swimming demands massive amounts of energy. Sarah took food every half hour, relying on carbohydrate and protein drinks, plus electrolytes such as calcium.

Unusually, she also topped up with warm risotto, prepared on board her support boat.

Sickness is a regular and unglamorous problem — a result of mixing food with salt water, and then trying to digest it all as you exercise while horizontal.

Veteran distance-swimmers advise learning to be sick between strokes.

Sarah seems none the worse for her tummy troubles. She celebrated her return to land gingerly with champagne and chocolates.