Lynda Manning, 68 (pictured) died after falling over and cracking her head open on the way to her car outside her daughter’s home in Swindon, Wiltshire in September last year

The death of a grandmother who waited an hour for an ambulance because 12 out of 13 in the area were on a break was not down to paramedic delays, a coroner has ruled.

Lynda Manning, 68, died after falling over and cracking her head open on the way to her car outside her daughter’s home in Swindon, Wiltshire in September last year.

Her last words to her daughter Paula were ‘Why is no one coming to help me? Where’s the ambulance? My head hurts’ as they waited for medics to arrive.

Eventually the Mannings decided to drive her to the nearest hospital after an ambulance failed to turn up.

An inquest into her death heard that 12 out of 13 ambulances in the area were on a legally-required break and the other was not in Swindon at the time.

But today a coroner has ruled that her death was not the direct result of the ambulance delay and she would have succumbed to her injuries anyway.

The Swindon Advertiser reports that Dr Claire Balyscz said at today’s hearing: ‘The delay in the ambulance arriving was due to the fact that the majority of ambulances were on an enforced break.

‘Due to high demand, the ambulance staff had been unable to take their breaks during a scheduled window. Lynda’s health deteriorated and another 999 call was made.

‘The extent of her injuries was unsurvivable and she died on October 2. The ambulance delay was not contributory to Lynda’s death.’

Mrs Manning’s family rushed to her aid and made several increasingly-desperate calls for an ambulance after she fell at 11.40pm on 28 September 2018 last year – but no help arrived.

When her condition worsened, they were forced to take her on the five-minute journey to hospital themselves but she died the following day after undergoing emergency neurosurgery.

At the inquest her family said they felt let-down that their pleas for an ambulance were not answered.

Kevin Morse, Mrs Manning’s son-in-law, told the inquest at Wiltshire and Swindon’s Coroner’s Court they expected an ambulance to arrive in around 10 minutes after she fell at midnight.

He said: ‘She’d caught her heel on the kerb and fallen, hurting her wrist and head.

‘She was lying on her side, there were no streetlights, it was dark, we couldn’t see her head injury.

‘We called an ambulance at 12.05 and since we were only two miles from the hospital we thought it would only take 10 minutes.

‘We made three more calls over the next hour to report the escalating scenario, then another call to tell them we were taking her to hospital ourselves.’ 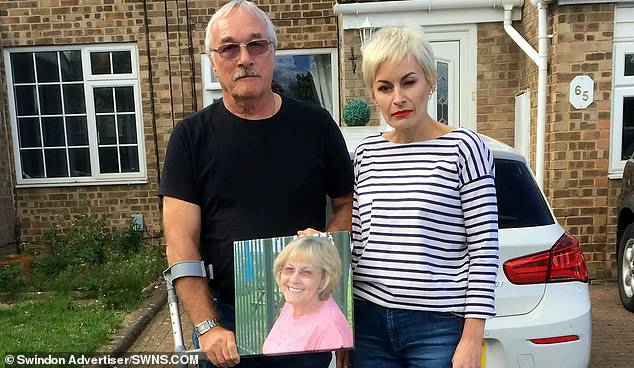 Mrs Manning’s call was originally classed as ‘amber’ but upgraded to ‘red’ after the second call.

However, crews would not be required to interrupt their breaks unless the emergency is ‘purple’ – the highest category.

Speaking after the inquest, Lynda’s widower Richard, who had been married to her for 49 years, said the family is devastated and feel they have been let down.

He said: ‘In all my years, I’d never had to phone an ambulance before and the one time I needed one, they failed me.

‘I have a lot of respect for the ambulance service but it’s atrociously managed and under resourced.

‘I blame the government for this, their austerity policy has consequences.

‘Watching her on the floor, crying out that nobody’s coming to help her and asking where the ambulance is, was horrible.

‘The last thing she said to me was ‘My head hurts’. She didn’t speak the entire time we were in the car or took her into hospital.’ 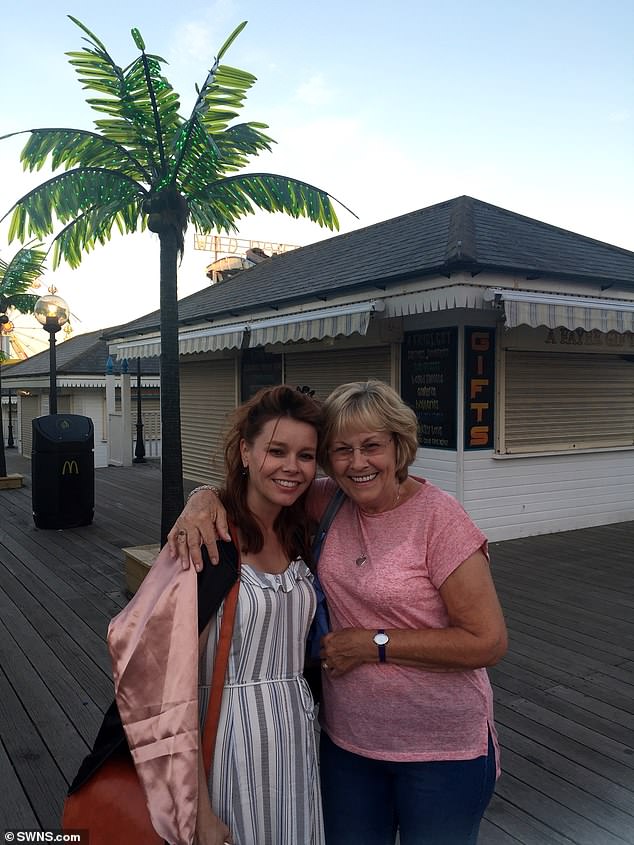 Mrs Manning, of Swindon, Wiltshire is pictured with her daughter Debbie, who is frustrated with the outcome of her inquest today

Paul Birkett-Wendes, South West Ambulance Service Trust county commander for Wiltshire, told the hearing: ‘At the time of the calls, a number of ambulances in the area had reached the point where they had worked for such a long time that they were in need of a protected break and must return to their stations.’

He said ambulance crews work 12 hour shifts with a staggered start and two 30 minute breaks that can be taken within two two-hour windows, so they don’t go on breaks at the same time.

But he added: ‘During hours of high demand, they don’t have a break and go from emergency to emergency.

‘After a certain point, they have to have a protected break and can only respond to the highest-level emergencies.’

Kevin Morse, partner of Mrs Manning’s daughter Debbie, said: ‘Instead of giving us false hope, we would have preferred that they’d been honest and said no-one’s coming.

‘We could have got her in the car a lot earlier and taken her to hospital in five minutes instead of waiting around for an hour and that could have made a difference.’

Debbie’s sister Paula said: ‘People need to be aware of the state of the ambulance service, more pressure is being put on the NHS and it’s at breaking point.

‘How many more people need to die before the government gives the NHS more funding?

‘I hope I never have to have an ambulance called for me, the thought fills me with fear.’