A Missouri woman was horrified to find out the ‘swishing’ noise in her ear was the eight legs of a poisonous brown recluse spider.

Susie Torres figured she’d gotten water in her left ear and when it wouldn’t seem to come, she went to the doctor for help.

A physician’s assistant took one look in Torres’s ear and called for backup.

‘She said, “I think you have an insect in there,”‘ as she went to get other health care workers, Torres told WIS10.

Luckily, the doctors managed to pull the spider out from Torres’s ear without aggravating it into biting her – and only then did they let Torres in on what was really crawling around in her ear.

Even when the first medical assistant ran from the room, talking about an insect, Torres ‘didn’t panic because I didn’t know what exactly was in there.’

What was in there was not an insect, but an arachnid.

The brown recluse spider that was in Torres’s ear is one of only three types of spiders in North American whose bites are significantly poisonous to humans.

Measuring between 0.6 and 2 cm, the brown recluse – or fiddleback, brown fiddler or violin spider – carries a necrotic toxin in its bite.

In other words, the chemicals in its saliva can cause flesh to die.

If left unnoticed and untreated the bites can cause a systemic illness that can cause fever, chills, nausea, joint pain, weakness and, in rare cases, seizures or even comas.

Some studies suggest that as many as 37 percent of people who are bitten by recluse spiders develop skin necrosis, but just 14 percent develop the bite-related illness. 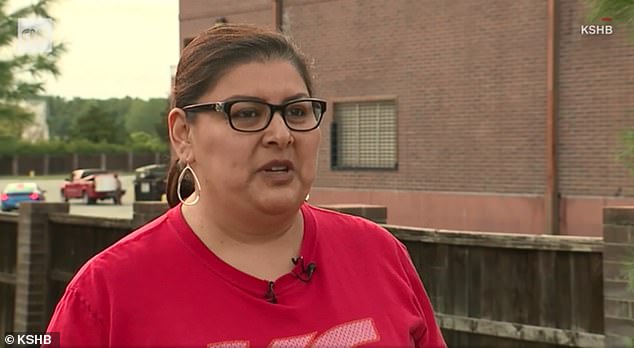 It’s not exactly clear how many people are bitten by recluse spiders every year.

One study of Florida Poison Control Centers found that 844 recluse bites were reported in six years.

But in the past decade, only one or two deaths have occurred as a result of brown recluse bites.

Nonetheless, it’s not an insect you would want napping in your ear.

‘Just, why? Where? What and how?’ Torres wondered aloud.

‘Never thought that they would crawl in your ear or any part of your body’ she said.

It is a rare event indeed, but Torres isn’t taking any chances with letting another spider into her ears.

‘I went and put some cotton balls in my ears last night because I didn’t have any ear plugs,’ she said.