Australia’s major cities have become some of the first in the world to bid farewell to 2018 and usher in 2019.

Sydney, Melbourne, Canberra and Hobart, and towns and cities dotted in between, welcomed the New Year in spectacular fashion on Monday.

More than one million people packed Sydney’s harbour foreshore to witness the city’s dazzling fireworks display, with a kaleidoscope of colour lighting up the night sky.

The Sydney spectacle is Australia’s biggest New Year’s Eve celebrations and one of the world’s most famous.

Some 100,000 individual pyrotechnic effects were launched above Sydney Harbour, set to the theme of ‘Pulse of Sydney’, in what was the largest fireworks display the city has seen. 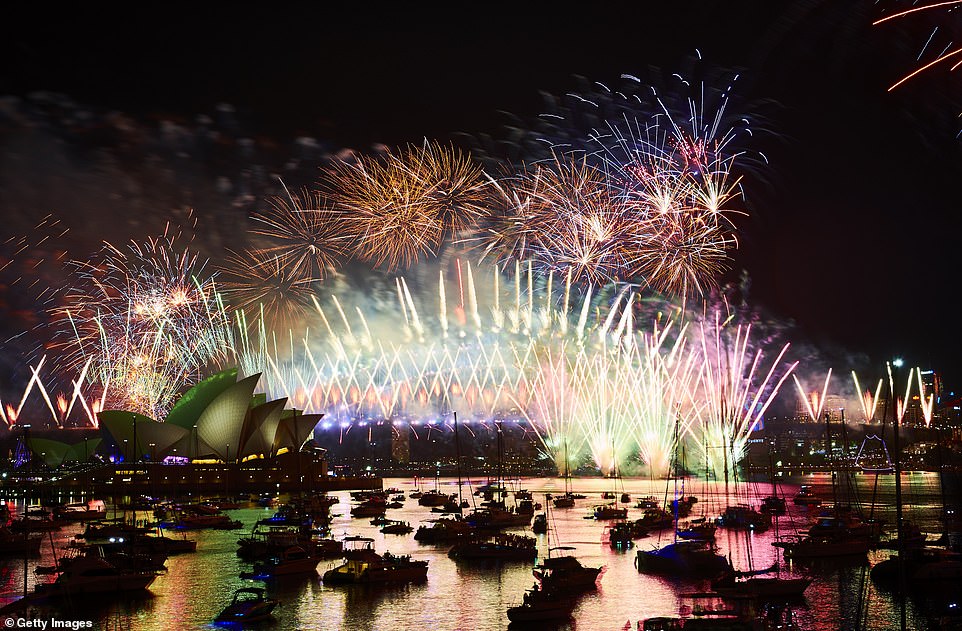 The harbour city ushered in the New Year with a dazzling firework display involving some 100,000 individual pyrotechnic effects 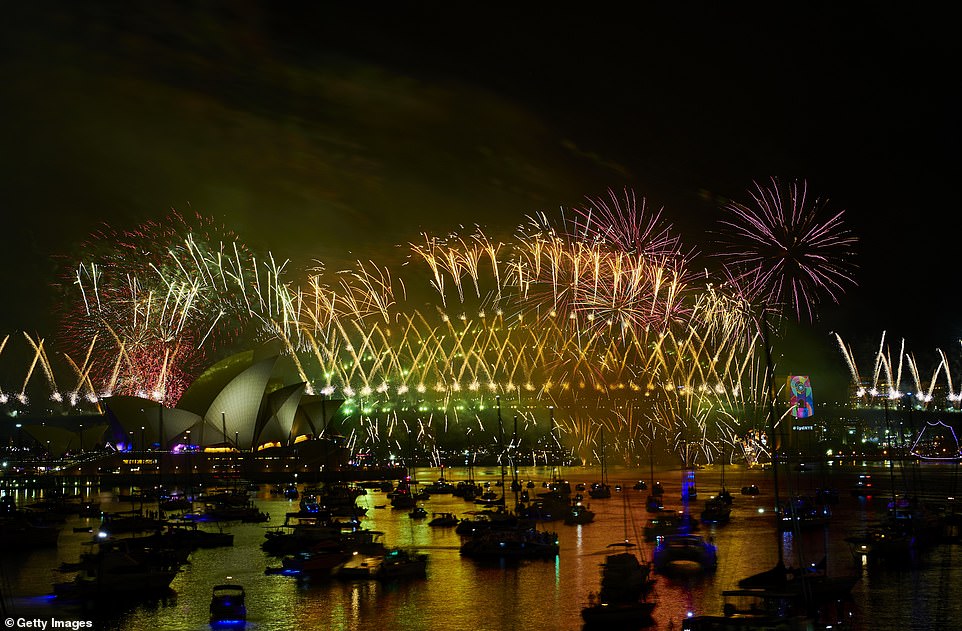 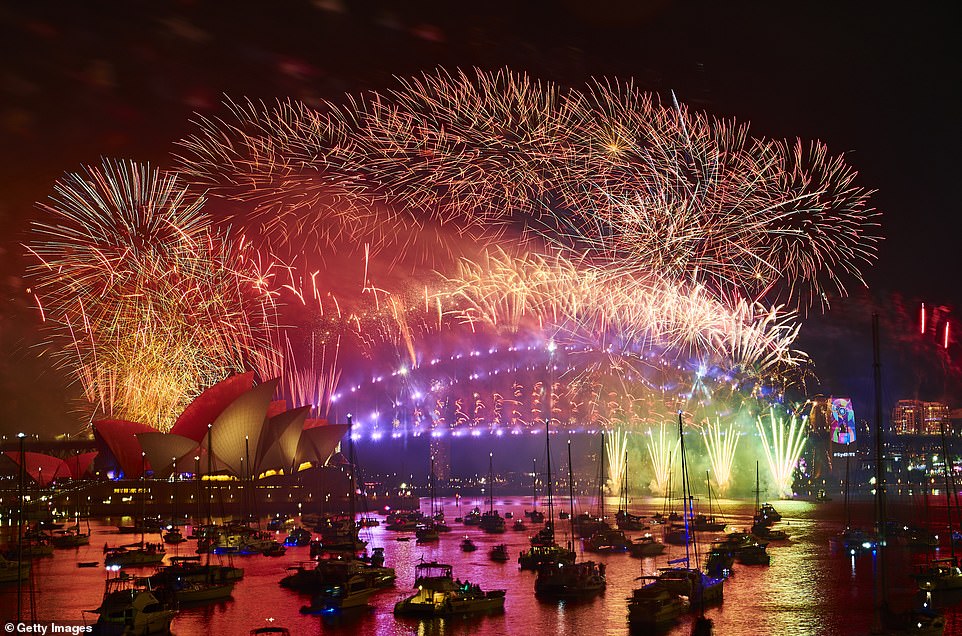 A kaleidoscope of colour lit up the night sky, with Sydney again showing why it is one of the best places to be in the world to ring in the New Year

The theme was inspired by the city’s diverse multicultural community.

There were eight pontoons parallel to the Sydney Harbour Bridge and four main barges from where the midnight fireworks launched.

Fireworks erupted over the harbour, from the east to the west of the harbour bridge.

Spherical fireworks inspired by Saturn and gold and silver firework cascades, in a tribute to Aretha Franklin, were part of the 12-minute-long display.

But it was not just the fireworks which lit up the night sky – a stunning light show unfolded, with the Harbour Bridge, Opera House and several vessels on the harbour illuminated.

An estimated one billion people across the globe watched the spectacle unfold. 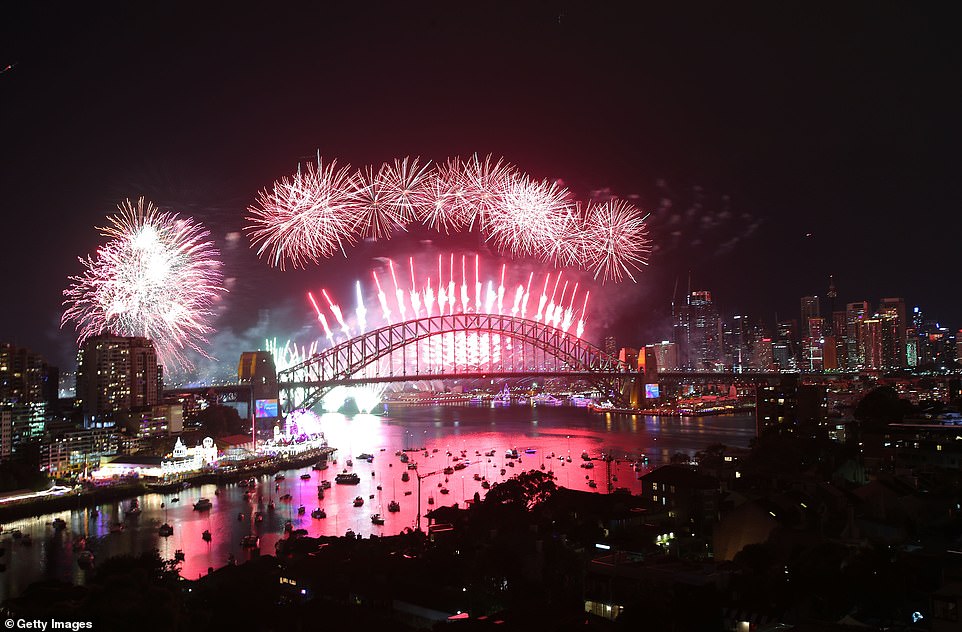 Fireworks erupted over Sydney Harbour, from the east to the west of the harbour bridge, and above the famous landmark 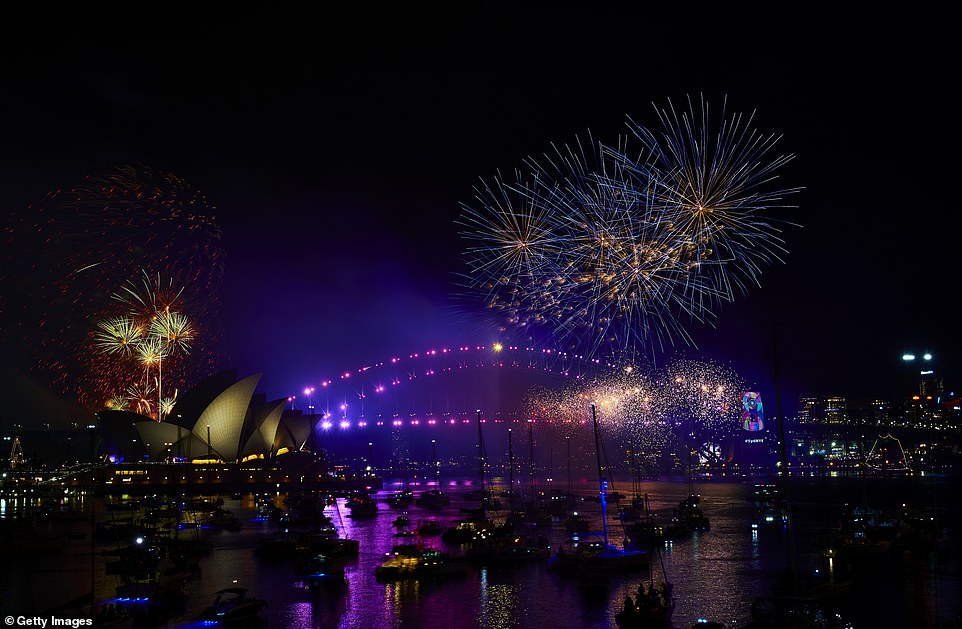 As the clock struck midnight, fireworks erupted over Sydney Harbour, with a dazzling spectacle to usher in 2019 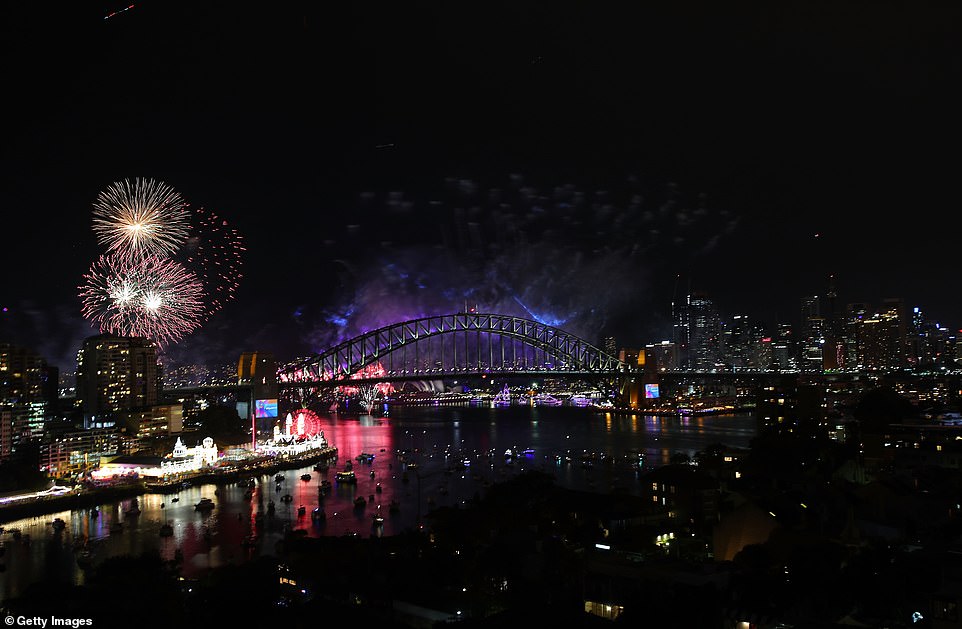 The dazzling fireworks could be seen from a number of vantage points throughout the city, including here at McMahons Point on Sydney’s lower north shore

Earlier in the night, as the clock struck 9pm on Monday, Sydney’s traditional family-friendly fireworks spectacle turned the city’s gloomy skies into

Rain had drenched the revellers who packed the harbour foreshore just before 7pm but cleared in time for the stunning display.

Revellers were forced to put up umbrellas and clad themselves in rain ponchos as the CBD battled showers and thunder.

In Melbourne, about 350,000 people packed the city’s CBD to witness 14 tonnes of fireworks being set-off from the tops of 22 buildings.

The city’s New Year’s Eve celebrations had what was dubbed a ‘world-first’ – fireworks which were spread across a 7.5km radius throughout the city.

In the nation’s capital, Canberra, Civic Place was aptly the place to be as thousands of individual pyrotechnics were launched into the night sky. 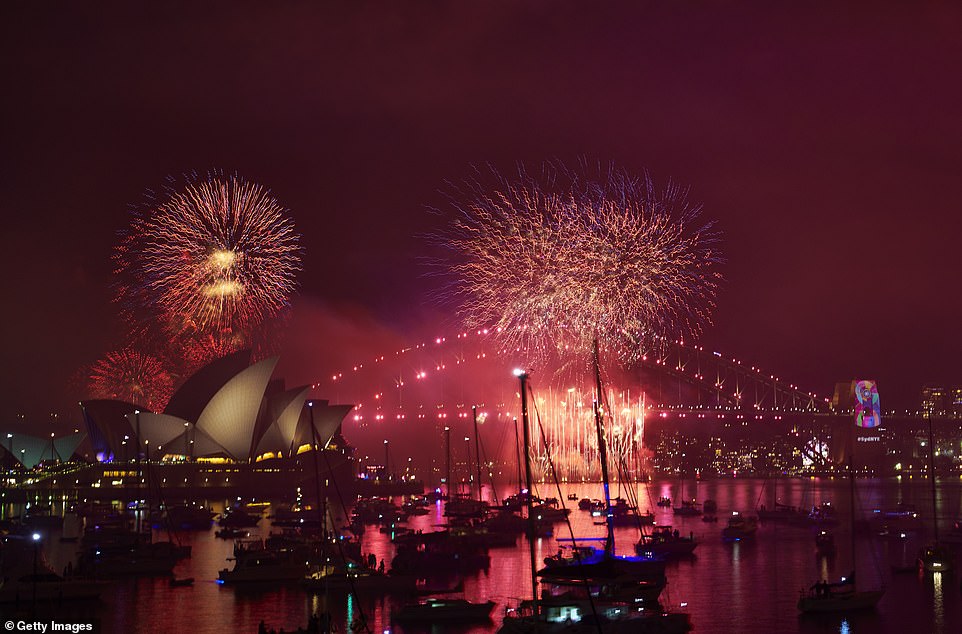 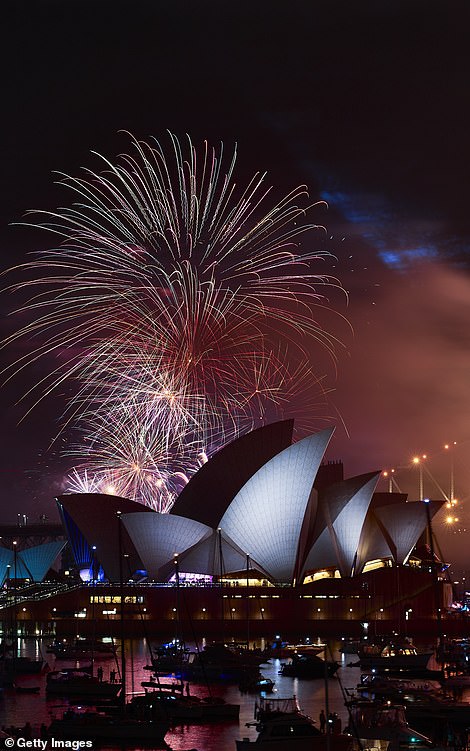 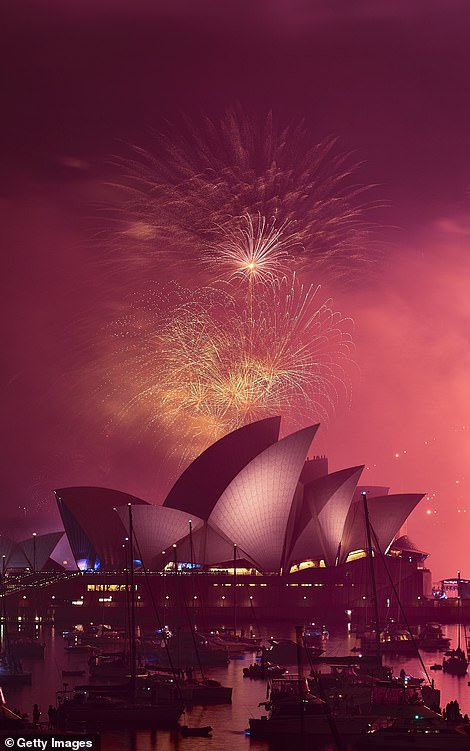 More than one million people have packed the harbour foreshore the fireworks spectacle, with some revellers opting to watch the display from a boat on the harbour 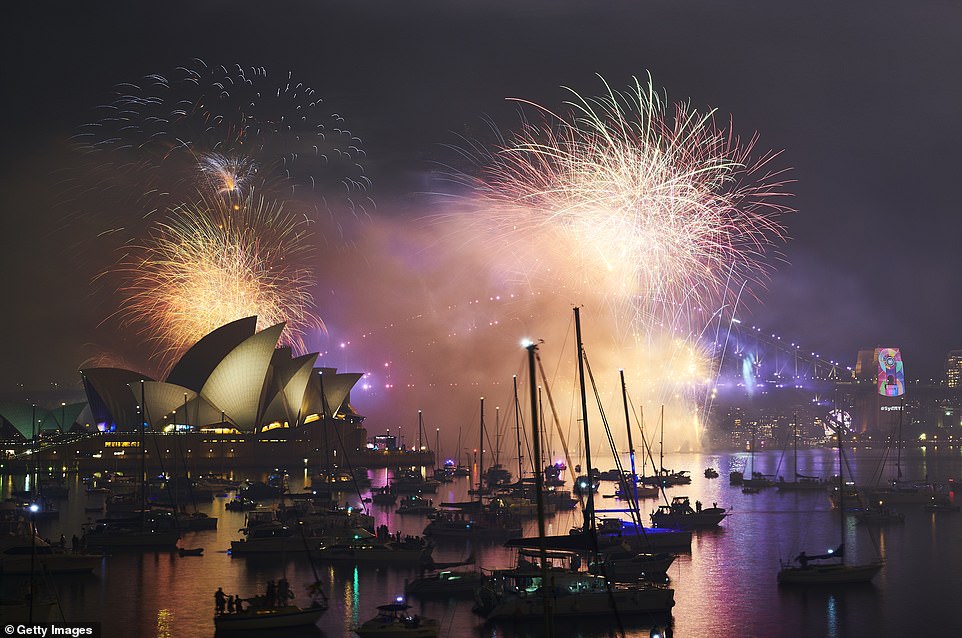 Revellers who had waited up to three days to catch a glimpse of Sydney’s New Year’s Eve celebrations were treated to a stunning fireworks display at 9pm, ahead of the midnight fireworks 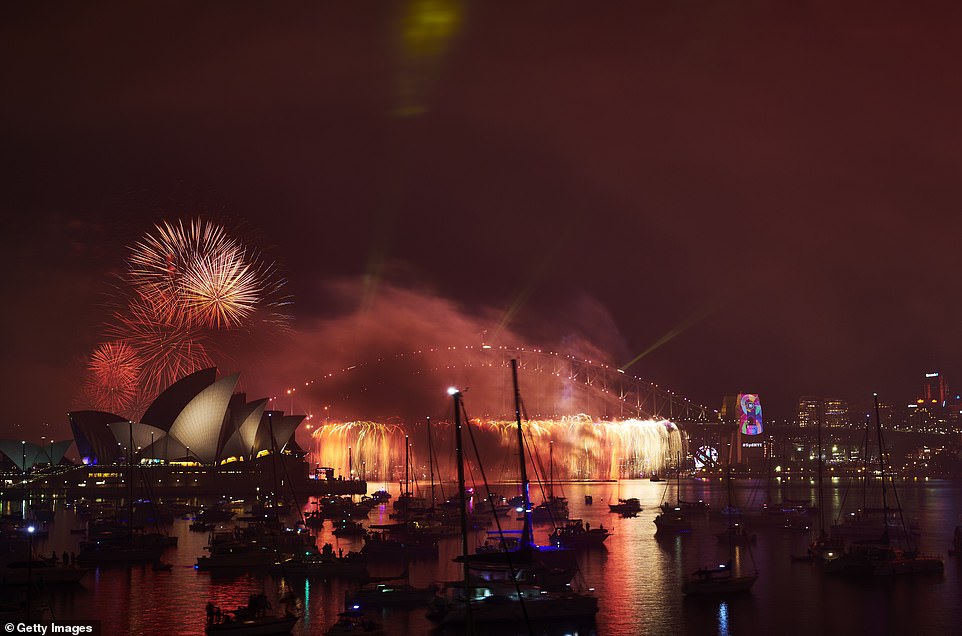 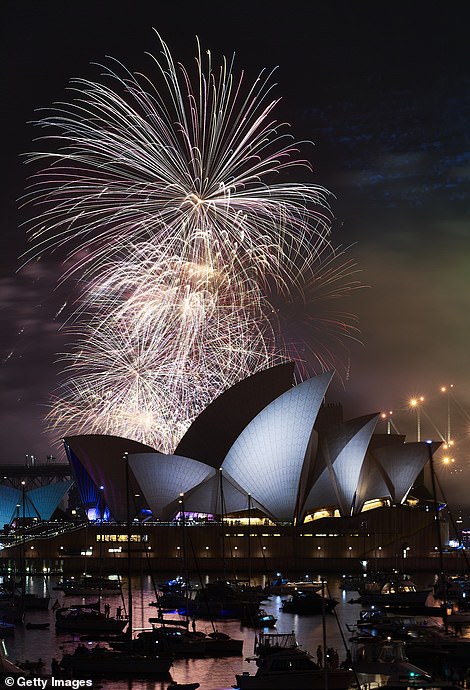 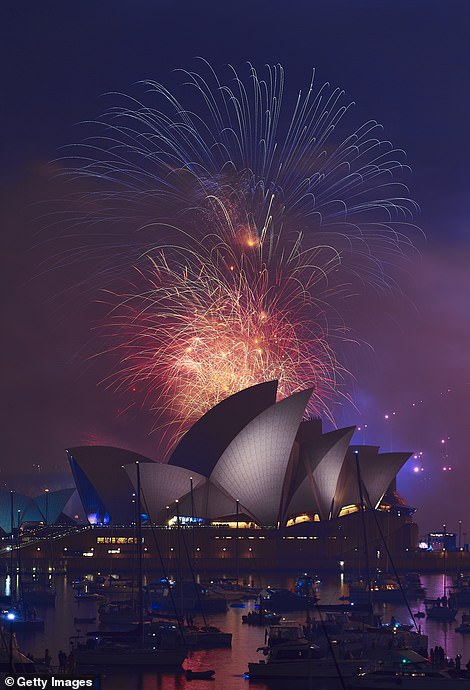 Like Sydney, Hobart boasted the biggest fireworks display the city had seen.

The Tasmanian city had a 10-minute-long fireworks spectacle, with a tonne of fireworks set-off, which was matched with music from the Taste of Tasmania festival.

Brisbane, Adelaide, Darwin and Perth will celebrate the New Year in the coming hours. 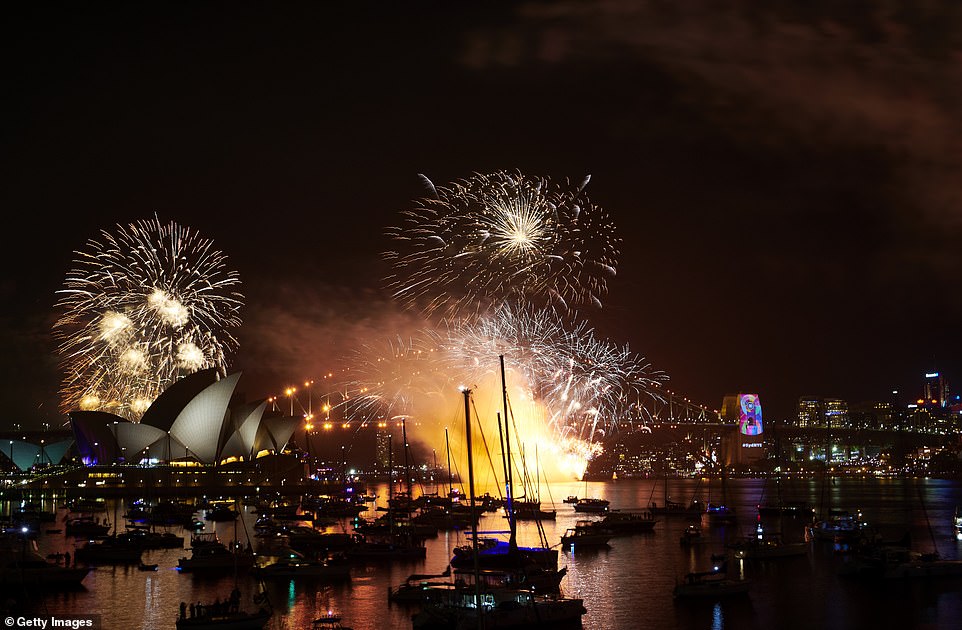 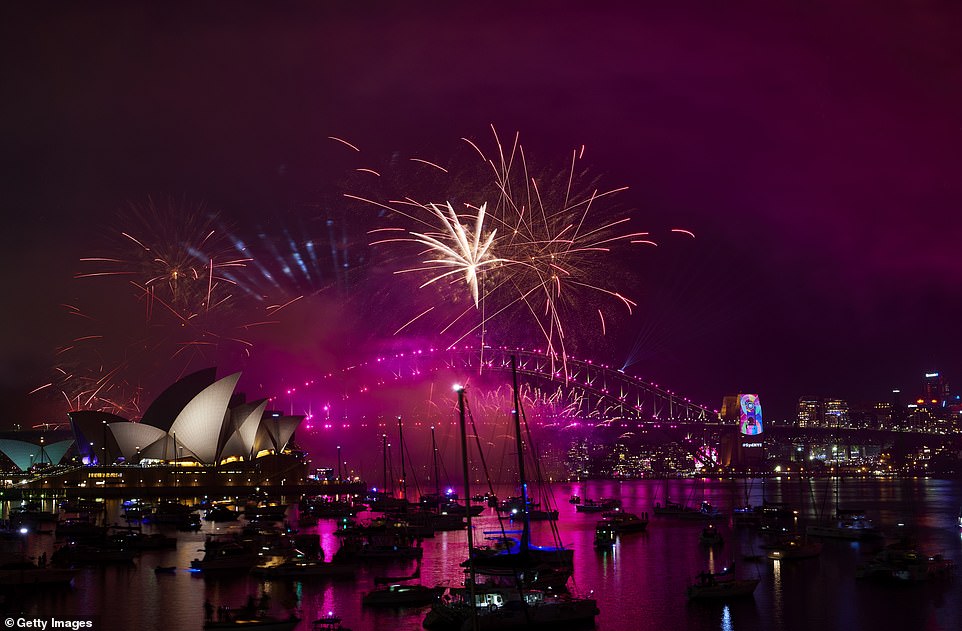 ‘The family-friendly 9pm fireworks set the scene for a huge celebration. We can’t wait to see what midnight brings,’ City of Sydney posted on Twitter 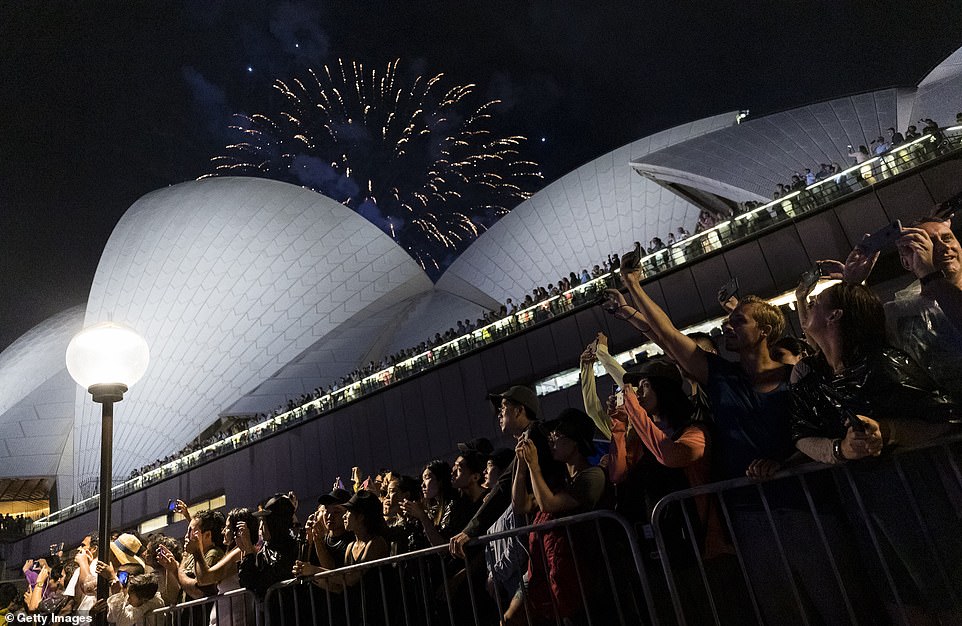 Crowds watched on in awe during the fireworks spectacle. Sydney has one of the world’s most famous New Year’s Eve celebrations