A team of Australian cheerleaders are training to take on the best of the best at the World Championships in Florida.

Shire Elite Royals are a coed cheer team based in Sydney’s Sutherland Shire, and were offered an entirely paid spot to compete in the prestigious competition against teams from 90 countries after a stellar 2019 season in Australia.

The athletes will be mingling with the most renowned in the world, including some of the stars of the new Netflix documentary, Cheer.

Cheer followed a group of students at Navarro College in Corsicana, Texas, as they vied for their 14th national title.

The breakout stars are now considered cheerleading celebrities, with endorsement deals and upwards of one million social media followers.

Shire Elite’s international coed team, Royals, will be competing at the World Championships in Florida for the first time in 2020 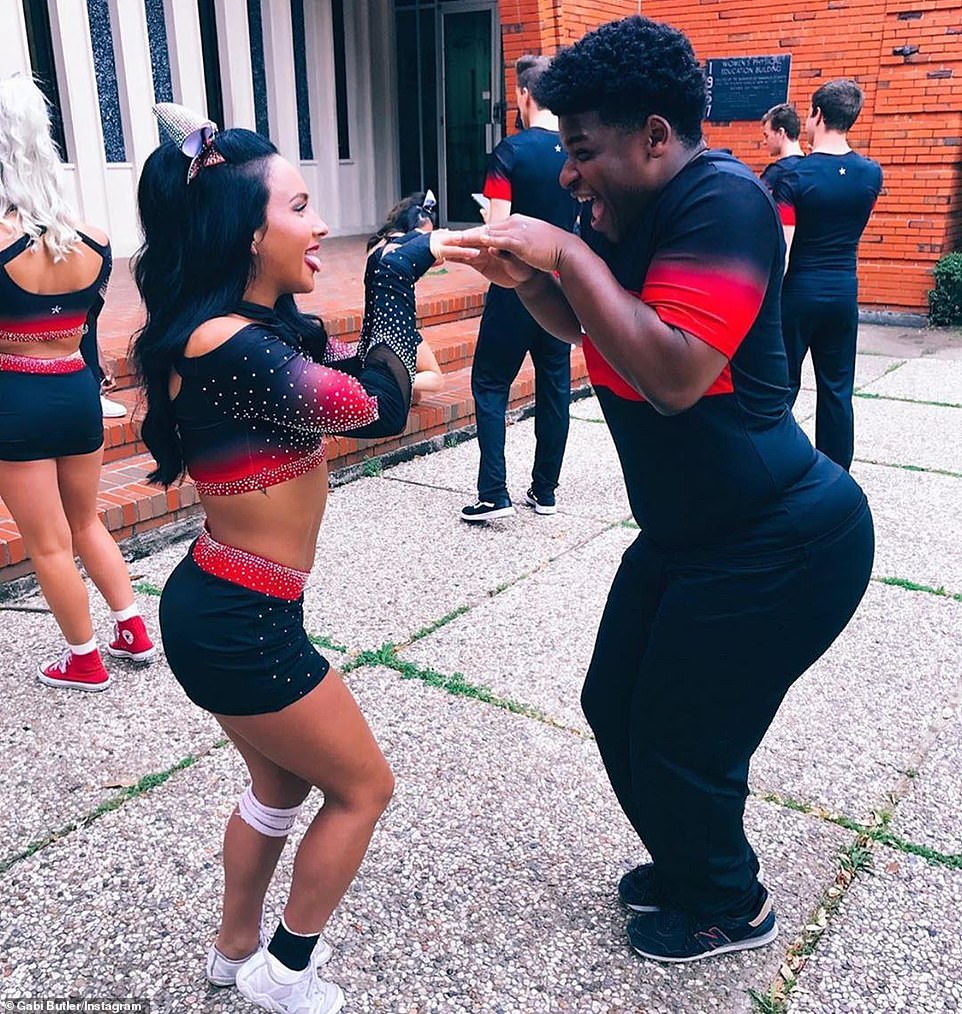 Some familiar faces who will also be competing at the prestigious competition include Gabi Butler (left) and Jerry Harris (right) from Netflix documentary, Cheer 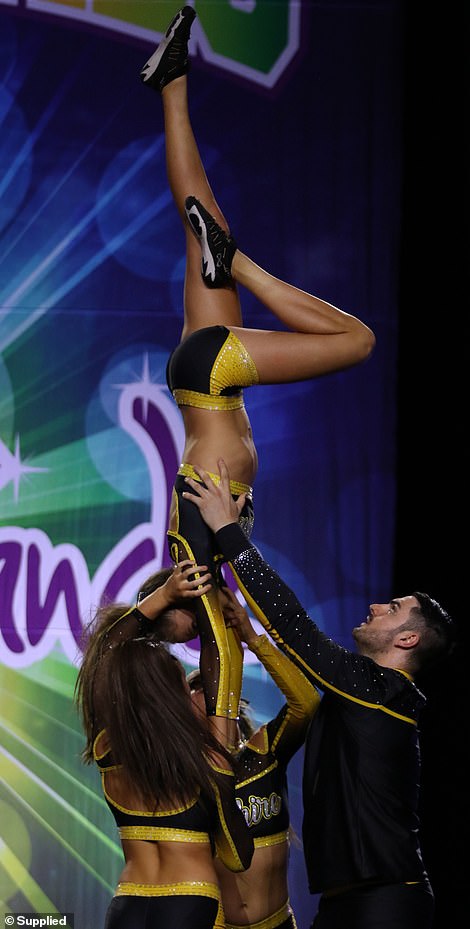 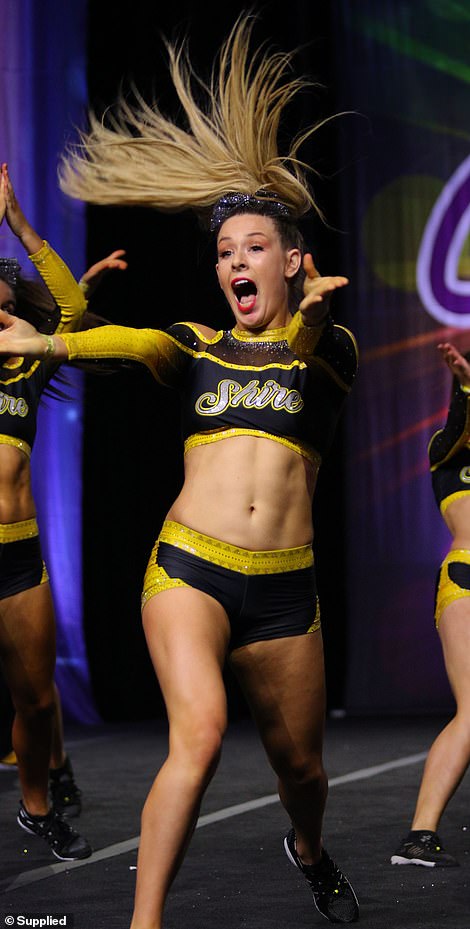 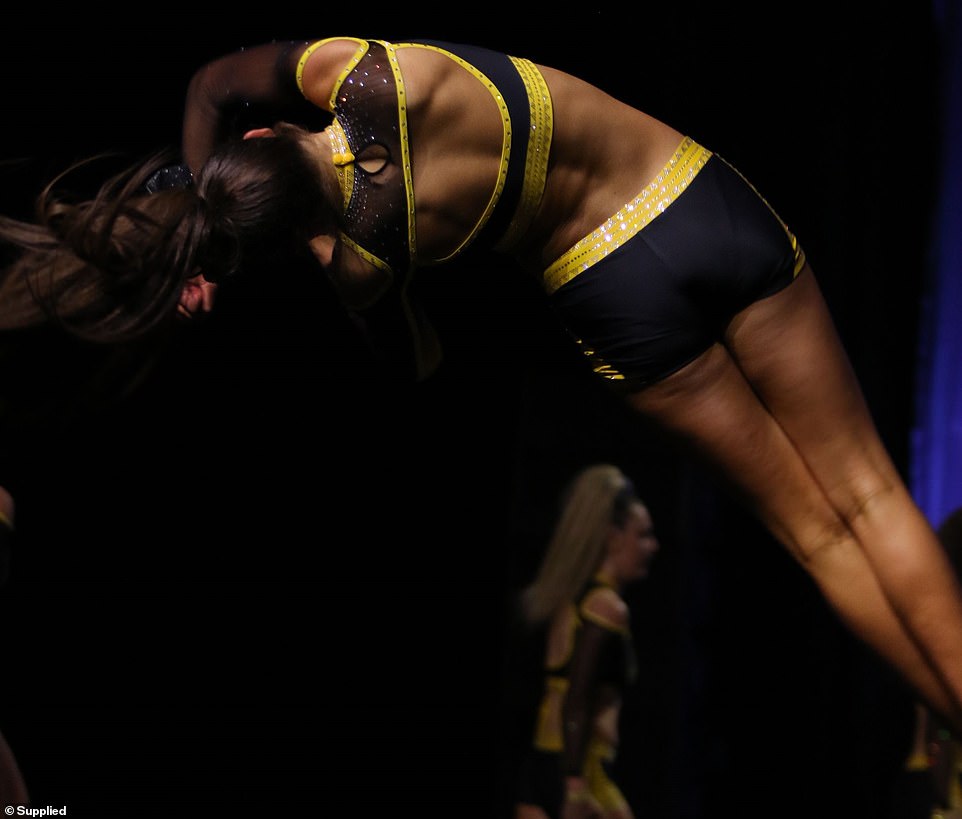 Pictured: One of the athletes performing a tumbling pass during the routine in which she completes a twisting layout

Some of the biggest names on the squad, like Gabi Butler, Jerry Harris and Allie Ross will be attending the World Championships in Florida with their own All Star teams to compete in the same competition that Royals will also be attending.

In fact, 24 Australian teams will represent the nation in April after years of dedicating their lives to the sport, which has been largely misunderstood since it first launched here in 2006.

The industry is also a great boost to local economies. 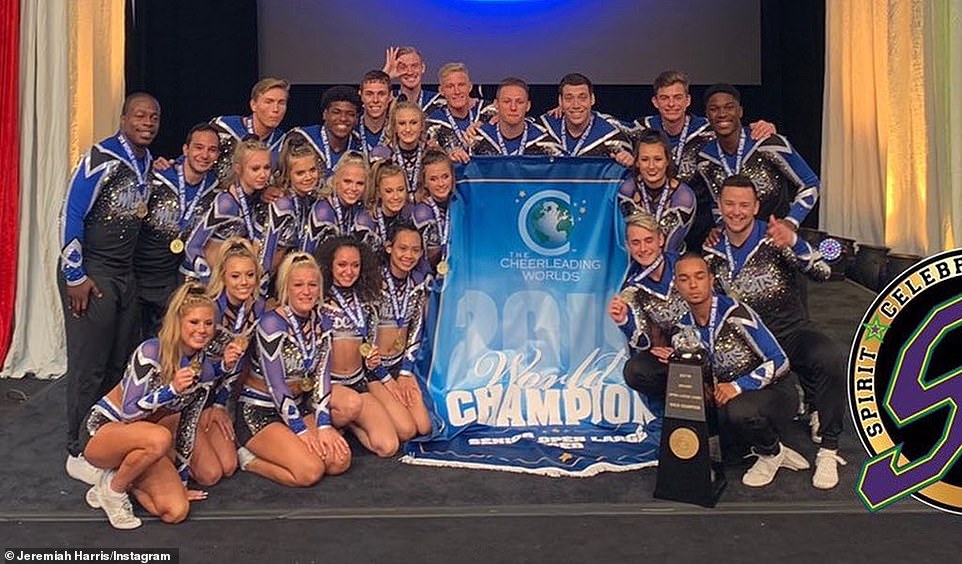 Cheer Athletics teams often win their divisions at the World Championships. They are known for their innovative routines 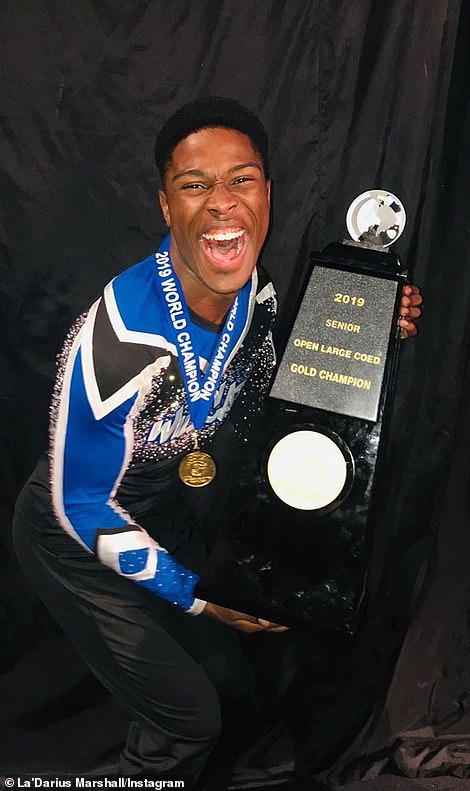 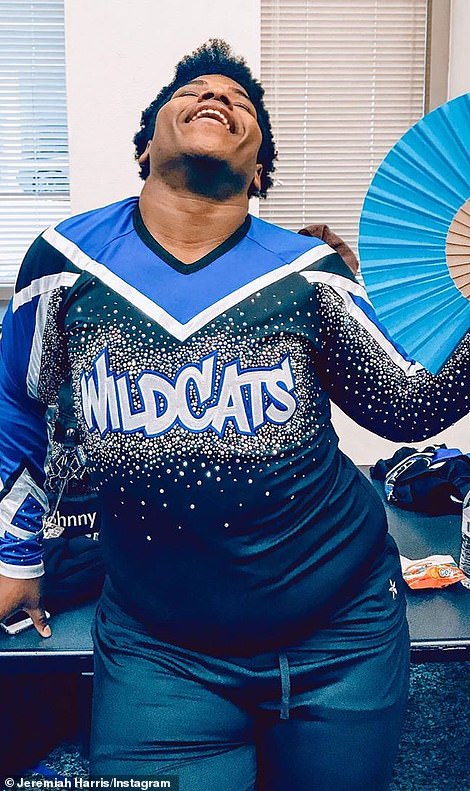 Multiple members of the Navarro squad also perform for Cheer Athletics. Both Jerry (right) and La’Darius (left) will be competing for Wildcats again this World Championships

In 2018, a single weekend of competitions generated revenue of more than $18.6million in expenditure for the Gold Coast.

Daily Mail Australia spoke with full bid winners, the Royals at Shire Elite, about what the competition means to them.

For the first time, the gym will take their International Open Coed Level Five team to Florida to compete in the World Championships in April 2020.

The gym told Daily Mail Australia some of the 16 athletes and two alternates on the team have been working toward that moment most of their lives.

‘Some of the kids on this team have been working toward this opportunity for more than eight years,’ a member of the coaching team said. 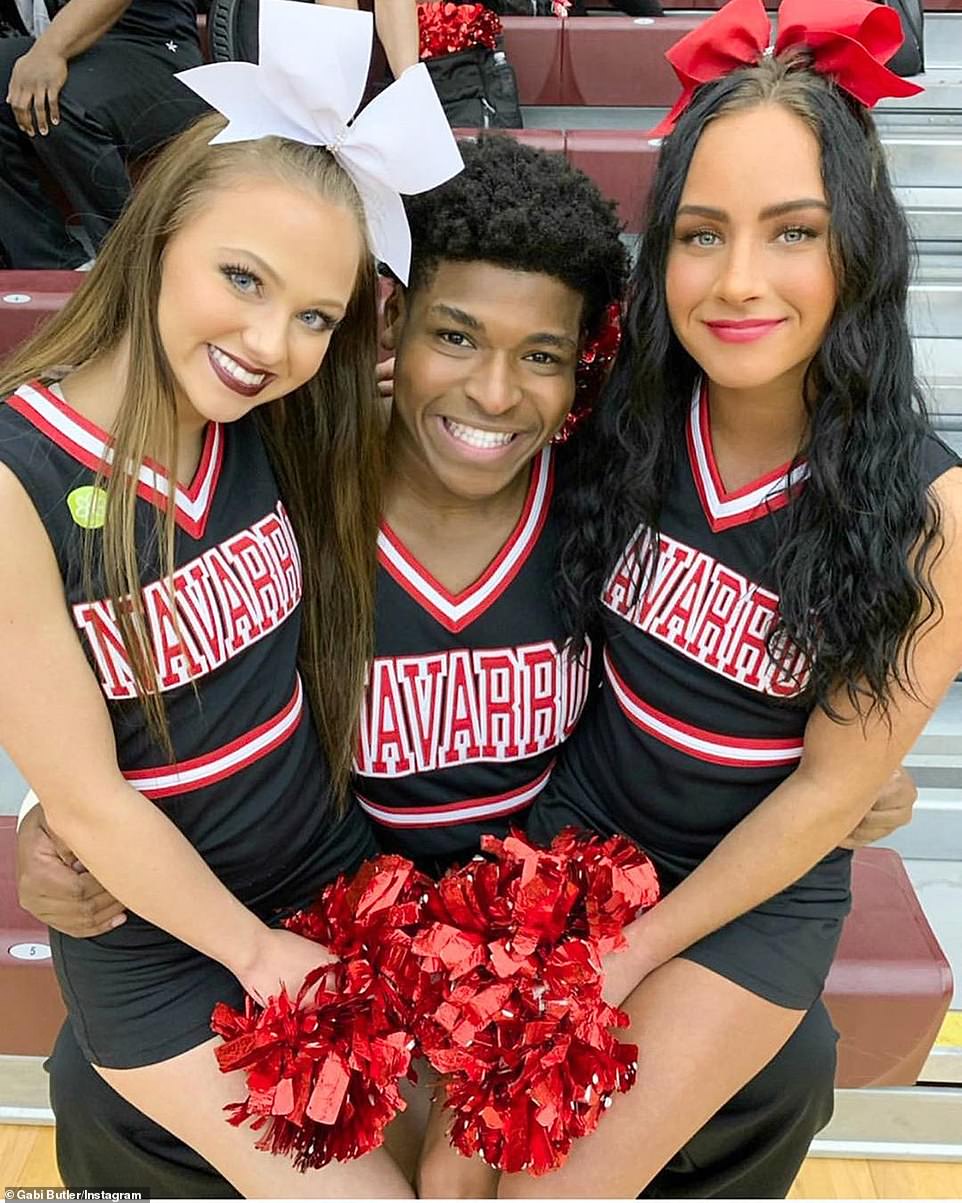 Pictured: Navarro cheerleaders after a game where they performed. The team became overnight stars after the release of Netflix documentary, Cheer, which follows their lives as they train for the Collegiate National Championships 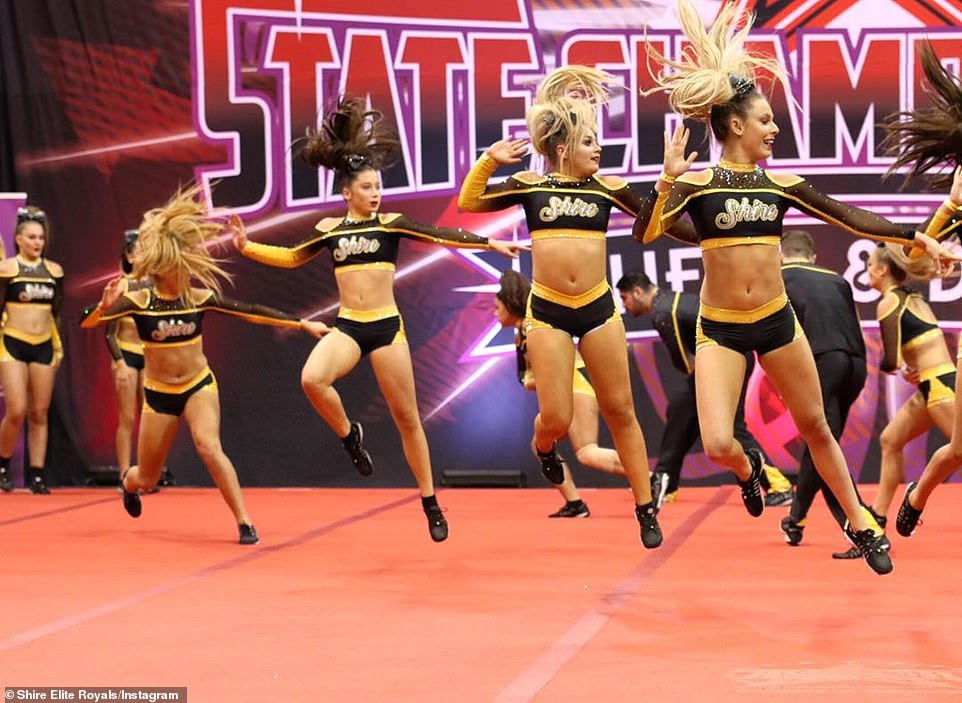 ‘Its been a goal of the club since its foundation.’

Shire Elite Cheerleading have been operating in Caringbah, in Sydney’s south, for eight years.

The gym offers classes for athletes of all abilities and ages. The youngest competitive athlete is just five years old.

Similar to the athletes featured in Cheer, Shire Elite cheerleaders consider the teammates and their coaches like family and consider the gym their second home.

Most teams in the gym, which range from levels 1-5, compete in six competitions across Australia each year. 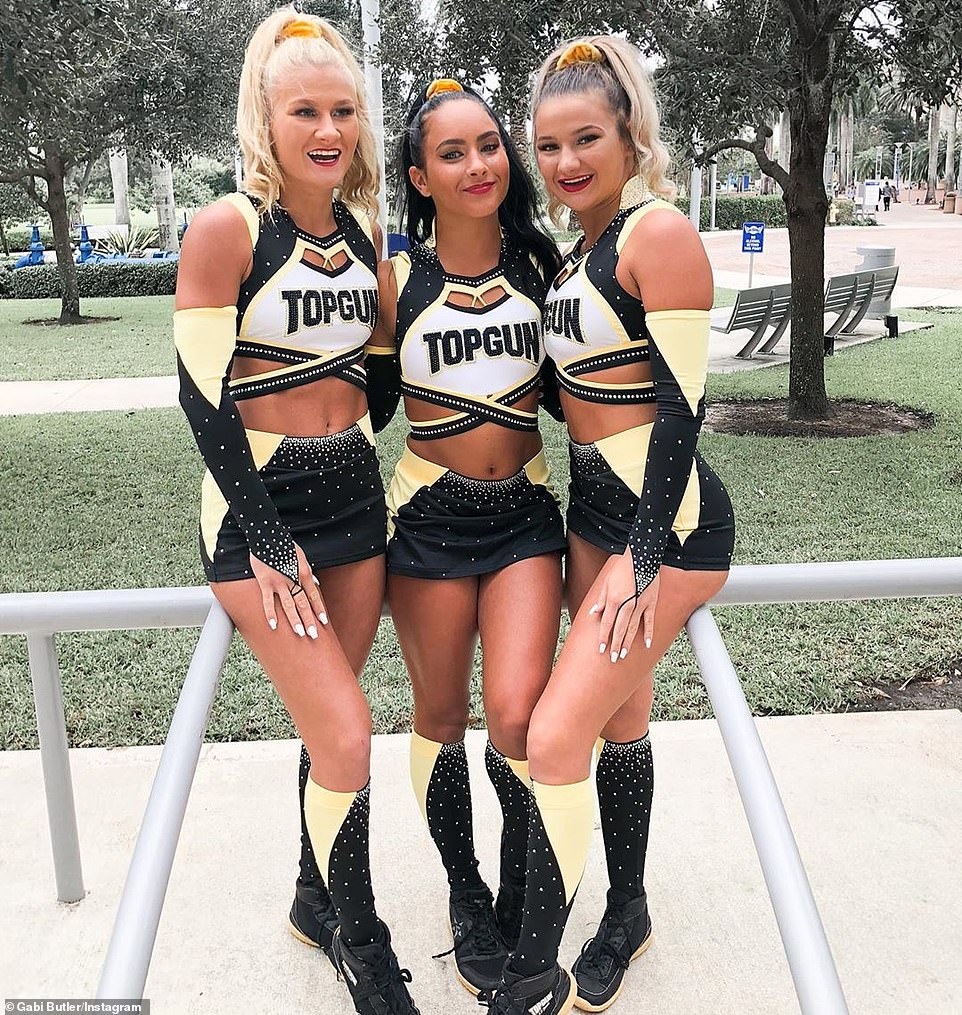 Gabi Butler (centre) will also be at the World Championships, competing alongside her team, 005, for the gym Top Gun

Most of the stars of the Netflix documentary compete in two teams – their All Star team, which is a ‘club sport’, as well as their college team, Navarro.

A lot of the athletes compete with different Cheer Athletics teams – arguably one of the biggest programs in the United States.

Jerry, La’Darius and James Thomas will all compete on Cheer Athletics Wildcats team for 2020, while nervous flyer Allie Ross and Will Hernandez feature on Claw7, also from Cheer Athletics.

Gabi Butler, who has cheered for Cheer Athletics in the past, was offered a flyer position on Top Gun’s 005 team and will also be competing at World’s. 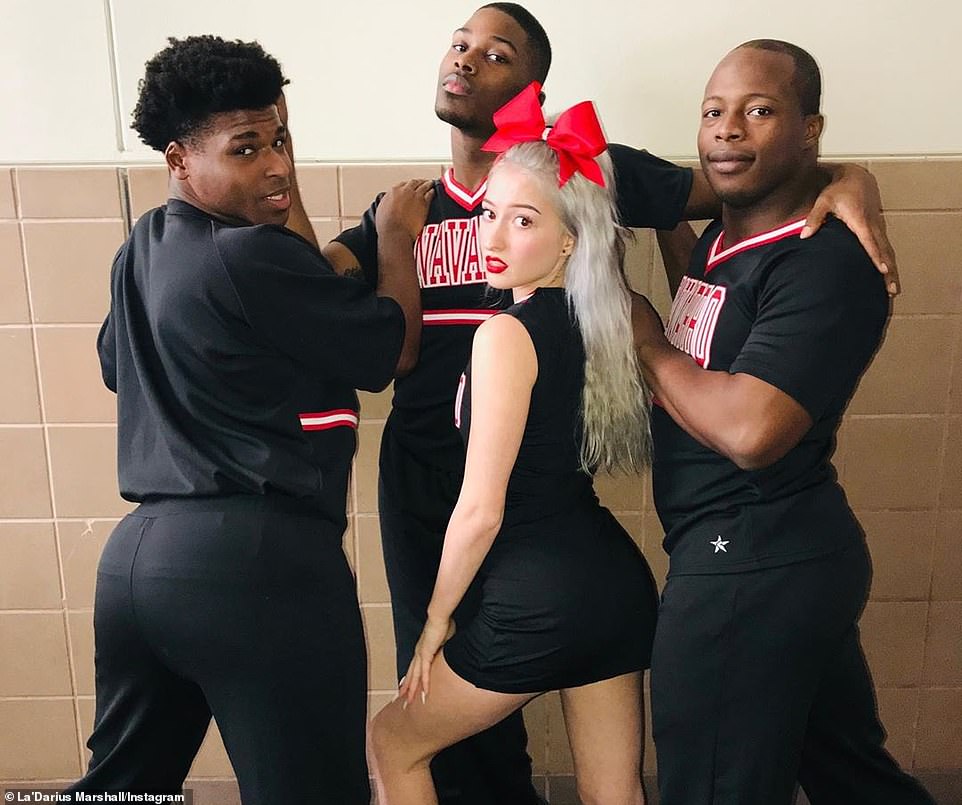 Lexi Brumback (centre) became a breakout star of the hit documentary series, but doesn’t appear to compete in any All Star teams 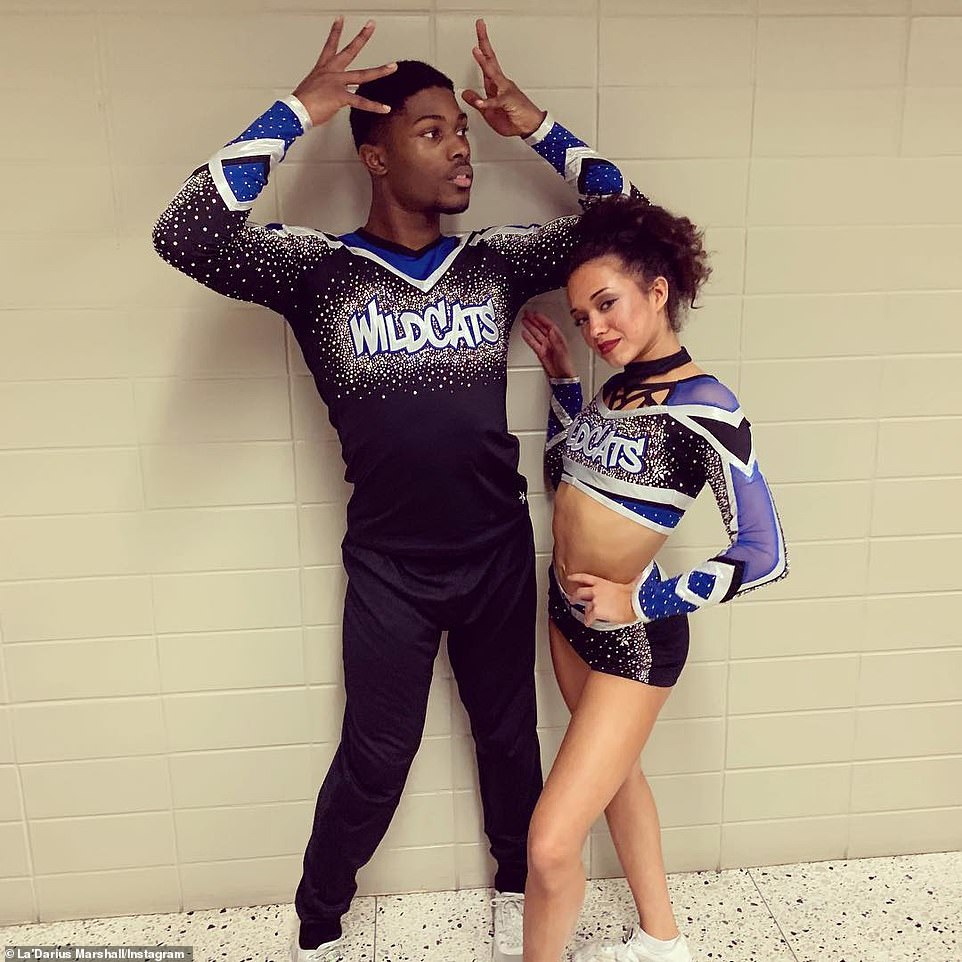 La’Darius Marshall will perform alongside his Wildcats team at Worlds. He has also announced his return to Navarro next season

The Australian All Star Cheerleading Federation told Daily Mail Australia the sport has been continuously growing by about 9-15 per cent each year since its inception in 2006.

An entire of year of grueling training sessions amounts to a single 2 minute 30 second routine, competed over a series of competitions and culminating to the national championships, and for some lucky teams, worlds.

Routines consist of six components which they are assessed on. These are stunting, pyramids, group tumbling, jumping, dance and performance.

With over 59,000 competitors nationwide, Australian cheerleaders are starting to make an impact on the global stage. 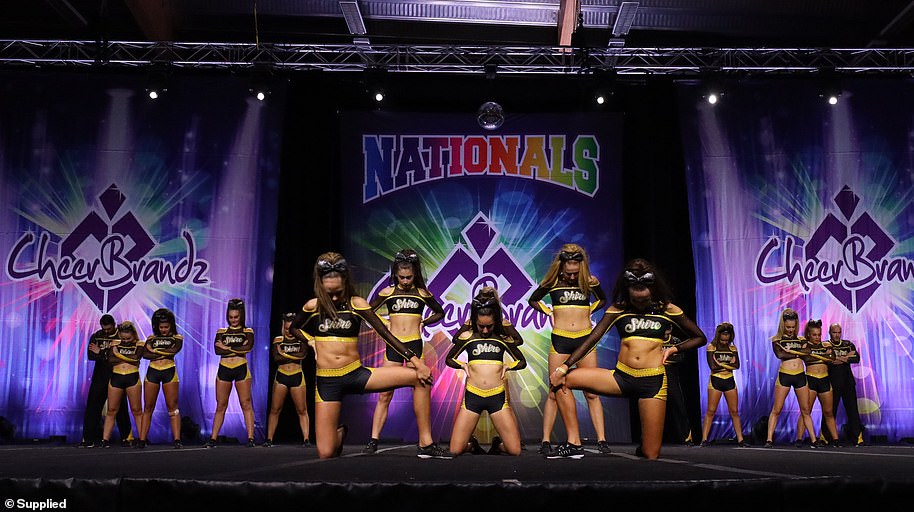 In 2019, an Australian team placed 2nd at Worlds, which is held annually in Orlando, Florida and includes teams from up to 90 countries around the globe.

Most coaches describe their programs as more than just a sport. Their programs teach respect, dedication, commitment, self confidence and teamwork.

Cheerleading involves both males and females and the highest athletes often begin at a young age.

Athletes train year-round to compete and are required to stay in shape in order to perform the high-energy routines to the best of their ability.

In 2018, a single weekend of competitions generated revenue of more than $18.6million in expenditure for the Gold Coast.