A Sydney chiropractor has been banned from practising after a tribunal found he undressed a woman, ‘intentionally’ touched her private parts and made a crude ‘happy ending’ remark during treatment.

James Hopper was convicted of indecent assault by a court over the incident and has now been barred from the profession for 12 months following a separate tribunal decision last week.

Hopper admitted telling his patient, in her 30s, ‘I should almost offer you a happy ending’, a NSW Civil and Administrative Tribunal decision published last week said.

Bizarrely, he disputed ‘happy ending’ meant orgasm while under cross examination. But he compared it to ‘men in a locker room talking about having a ”rub and tug”’.

Chiropractor James Hopper, seen outside court after he was charged three years ago 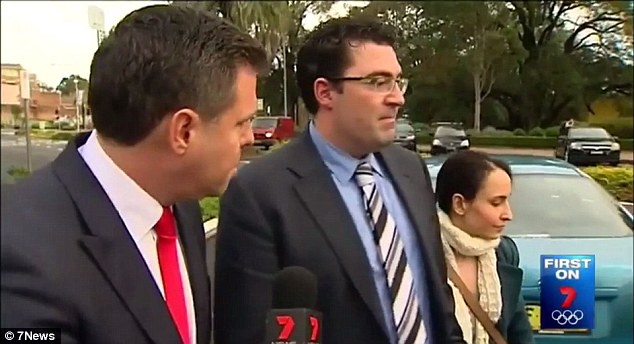 Hopper denied he had deliberately touched his patient in inappropriate places and argued if it happened, it would have been ‘accidental or incidental’

The Health Care Complaints Commission told the tribunal the circumstances of Hopper’s offending were very serious.

The commission said he deliberately touched her private parts and fully undressed her when there was ‘no clinical basis’ for her to be naked.

At one point, he also put her hands on his thigh. The parties disputed whether he placed her hand on his upper or middle thigh. The chiropractor played for the Northwestern Predators American football team

The commission accused him of refusing to accept the ‘happy ending’ remark he made was ‘clearly sexual’ in order to ‘minimise his conduct’.

Hopper denied he had deliberately touched her private parts and argued if it happened, it would have been ‘accidental or incidental’.

He denied that there was anything intentional in his treatment of the patient, that he had any sexual intent or gained any sexual gratification.

But the tribunal ‘had considerable difficulty in accepting these submissions,’ its decision said.

The tribunal ruled it was ‘comfortably satisfied’  that his behaviour was ‘intentional and for reasons of sexual gratification at a minimum’.

The decision said the tribunal did not believe he was a sexual predator but ruled what his behaviour was did was ‘totally unacceptable’.

It said he had a ‘lack of insight’ into his behaviour and found him guilty of professional misconduct.

His registration as a chiropractor was cancelled and he is banned from re-registering for 12 months.

An online profile said he had been a registered chiropractor since 2005.