Sydney man pays $17 for a sandwich only to be handed vegetables, ham and two pieces of bread

Some assembly required! Man fumes after he pays $17 for a sandwich only to be handed a pile of vegetables, some ham and two pieces of bread

A photo of a deconstructed sandwich ordered from a Sydney cafe has caused outrage on social media.

A Sydneysider was shocked to be presented with a plate full of ingredients rather than the ham sandwich he ordered, according to a post on Reddit.

The image post shows two slices of bread in a cardboard box that comes with some slices of ham, avocado, lettuce leaves, olives, tomato and strawberries.

Would you pay $17 for this ham sandwich from a Sydney cafe that you had to make yourself?

The box is topped with a serving of mustard and a tiny gherkin.

The photo has since sparked hundreds of comments within hours of being posted on Sunday.

‘This is the worst sandwich I have ever seen, I don’t understand the appeal of deconstructing food at all,’ one person commented

Another added: ‘If I wanted to make a sandwich myself I would have stayed at home and done it.’

Other commenters were more interested in the surprise addition to the sandwich.

‘The stupidest thing of all in that pic is the dumb strawberry,’ one person posted.

Others saw the funny side.

‘There goes his first home deposit,’ one person equipped.

Another added:  ‘Did he order it at Ikea?’ 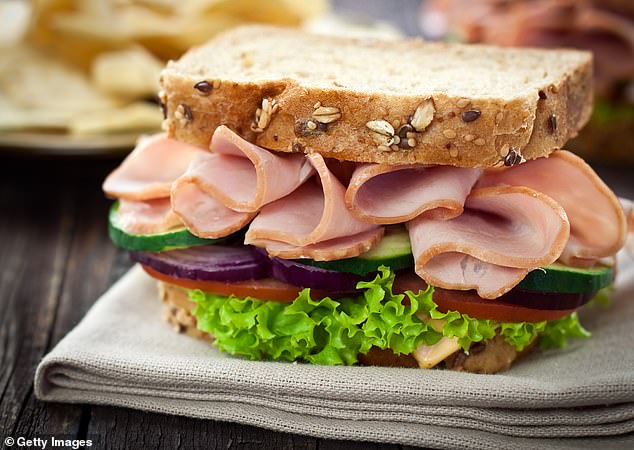 A Newcastle cafe found itself in the headlines earlier this year after an upset customer’s photo of its unique take on Vegemite and toast went viral on social media.

A photo of a sad looking sandwich consisting of two tiny pieces of meat, a few pieces of garnish and a smattering of horseradish cream served on board a Qantas flight from Melbourne to Sydney in July also sparked outrage at the time.