A single Sydney mum has claimed she was ‘shamed’ by her daughter’s school for sending her into the classroom during the city’s Covid-19 lockdown.

The mother took her eight-year-old daughter to the Brighton Le-Sands Public school in Sydney’s south on August 3 only for her child to return home with a letter asking parents to keep their children at home unless they are ‘essential workers’.

‘We are aware that some families are bringing their children to school because ‘it is too hard to keep them at home’. If this is you, please keep your child at home,’ the letter said.

The mother – who asked to remain anonymous – said she was outraged at the response as she has to care for a toddler at home while trying to launch her own architecture business.

‘I got very upset because they had clearly discussed the letter with my daughter at school and she came home saying, ”Mummy, I have a very important letter”. Then she told me she didn’t want to go to school anymore,’ she told news.com.au.

The school said 15 per cent of students had been going into the classroom, which was well above the state average during lockdown and had concerned the local community.

‘We are receiving complaints from our community regarding students who are in attendance while neither parent is working or where there are parents working from home,’ the note continued.

The mother said she shares the custody of her children with her former partner and needed to work in order to get paid.

‘They almost shame the children as well as the parents … and that’s what upset me the most,’ she said. 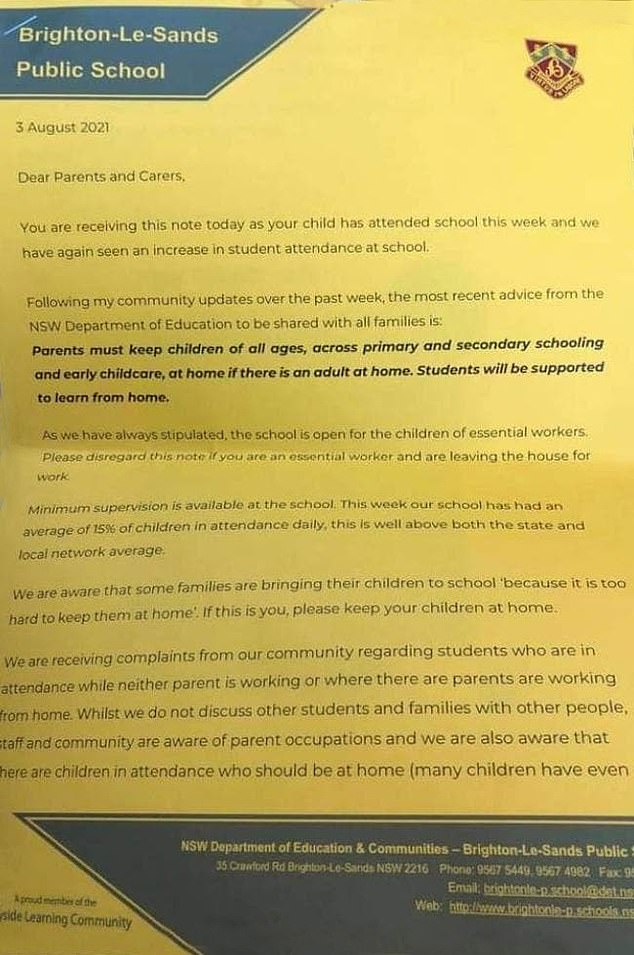 She said parents shouldn’t have to explain their motives for sending their kids to school during the city’s lockdown.

With her extended family living overseas, the single mum said she has little support around her.

‘I have a young son who is a toddler and I work for myself. I don’t survive if I have to sit up and work all night and then care for the kids in the day,’ the mother said.

A spokesperson for the NSW Department of Education said the letter did not mean to cause offence or shame the parents of the school.

‘The letter from Brighton Le Sands Public School does not intend to shame parents, is not directed at any one parent and re-emphasises the current health advice that parents and carers in Greater Sydney should keep their children at home if they can,’ they said.

‘This advice from NSW Health is aimed at reducing transmission of the virus. Parents with children at schools under level four restrictions must keep them home if they can.

‘Schools and outside of school hours care (OOSHC) services remain open for any child who need it, example if their parent or carer is an essential worker, and no child will be turned away.

‘The wellbeing and safety of students and staff is our priority, and overwhelmingly, parents have not been sending their children to school, and we thank them for their efforts.’

Brighton Le-Sands was recently added to the list of LGAs in Sydney that have come under tougher restrictions.

Those in the area must only leave home if they have a reasonable excuse and must stay within 5km and carry a mask at all times. 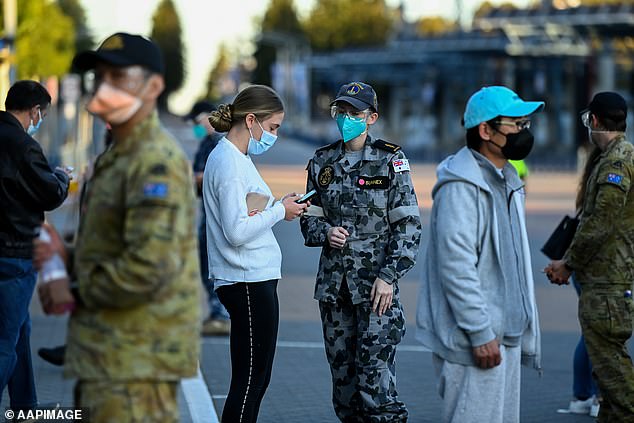