A mother was left fuming after she was unable to enter her local Aldi store when the entrance gate shut 10 minutes before closing time.

The Sydney woman, who admits she is notorious for visiting places just before closing due to work, vented on the Aldi Mums Facebook page.

‘So the other day I went into my local Aldi to pick something up last minute,’ she began.

‘It was 10 minutes before closing time and they had switched off the entrance gate so customers couldn’t get into the store.’

The Sydney woman, who claims she is notorious for visiting places just before closing due to work, took her furious rant to the Aldi Mums Facebook page (stock)

She said that she ‘gets their reasoning’ and still managed to get into the store through the register line – and was in-and-out within five minutes.

However, she said if the closing time is 8pm then the store should ‘expect that people will come in at the last minute and actually stay open until 8pm’.

‘It kind of pi**ed me off that they did this,’ she continued.

‘The solution would be to extend trading hours like other supermarkets, not close even earlier.

‘There’s always huge lines at the checkout at closing time indicating that clearly many people experience the same time constraint to get their shopping done before 8pm.’ 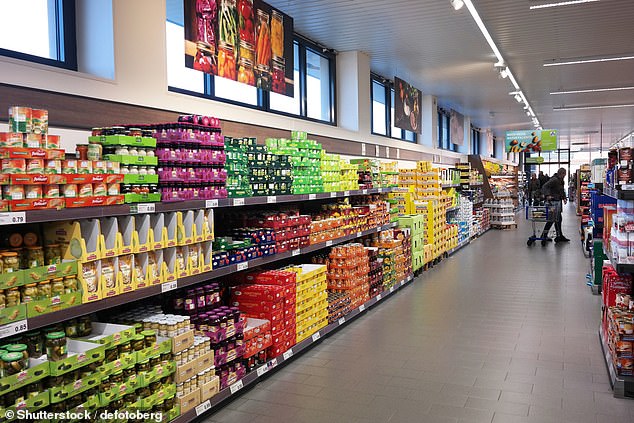 ‘My question is whether this is normal trading etiquette for all Aldi stores or if they’ve just decided to do it at this particular one? Anyone have a similar experience?’

Members of the group slammed the woman’s post, explaining retail workers want to go home to be with their family.

‘They want to get out on time as they are only paid until 8pm. There’s nothing more annoying then customers coming in at the last second then we have to stay behind with no pay,’ one person wrote.

‘Pretty normal. Employees want to get home too,’ another commented.

‘We all have families we want to go home and see and just because the store closes at 8pm it doesn’t mean there isn’t a whole stack of jobs that need doing once customers have left,’ another explained.

‘So normal, you need to be out of there by 8 not starting your shopping just before 8. Workers need to get home as well finalise registers etc and actually get paid for their time,’ someone else wrote.