Sydney nurse expresses her disgust after watching 3,500 people converge on the city to protest against lockdown and mask wearing

A Sydney nurse has shared her disgust at witnessing thousands of Australians turning out to protest lockdown restrictions in the city last weekend.

Mari posted a video under the @hvalapuno handle on TikTok in which she looks both shocked and depressed while dressed in her nurse’s uniform.

She captioned the video, ‘Respiratory/Covid/ED/ICU nurses after seeing the “freedom” protest in Sydney’. 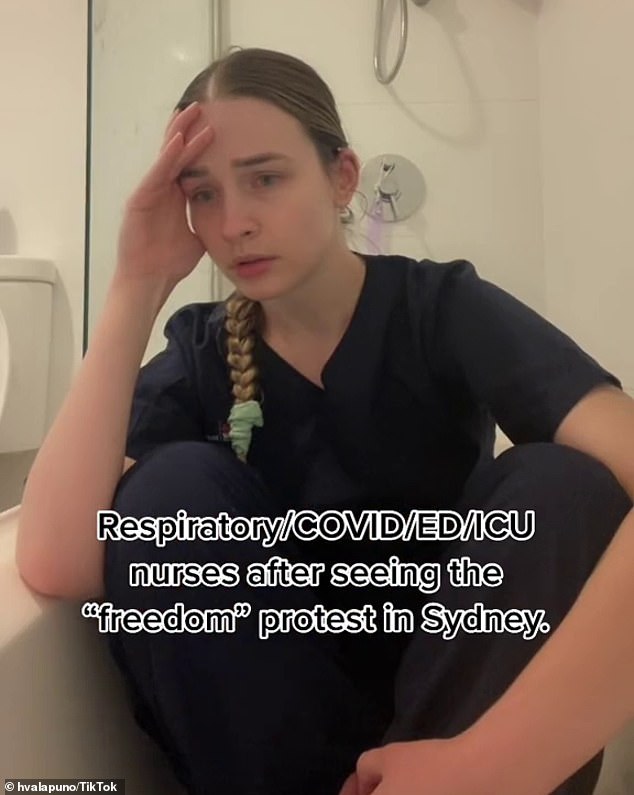 Reaction to her post was both for and against, one person accusing her of being ‘a paid actor’. ‘How I wish I was acting,’ Mari responded.

Reaction to her video, hashtagged #nursesoftiktok, reflected community division over Sydney’s ongoing lockdown, which NSW Premier Gladys Berejiklian said on Wednesday morning would be extended another four weeks until August 28.

Many expressed sympathy with the nurse’s post, thanking her for the work she does.

‘I feel for you. Just can’t believe Australian people would do this. One RN to another. Sorry you have to deal with this,’ posted one person in response.

‘The rest of Sydney who weren’t there are crying with you,’ wrote another.

‘Sydney Covid nurse here and I feel you! It’s insanity! I can feel the overtime being extended now,’ replied a fellow nurse.

But others cast doubt on her post, or defended the aims of the anti-lockdown protesters.

‘Oh, how I wish I was acting,’ Mari responded.

‘You’re a drama queen, the protesters won’t get tested,’ another person replied to the post.

‘They will be once they hit ED,’ Mari said.

‘What about the nine that died from suicide yesterday?’ said another commenter.

‘And you think protesting will keep suicide rates down?’ Mari replied.

‘No, It will heighten Covid positive numbers and mental health sufferers will be home for longer.’ 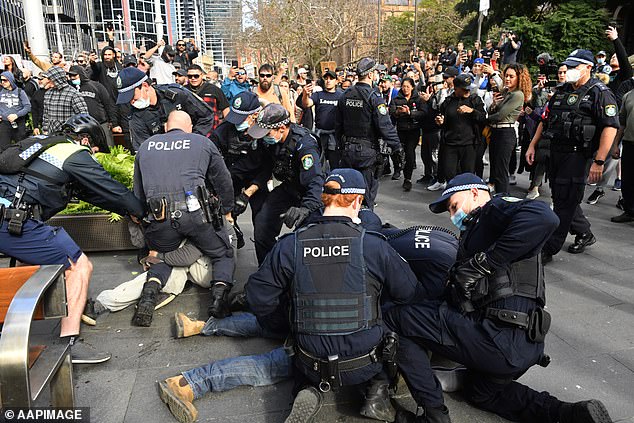 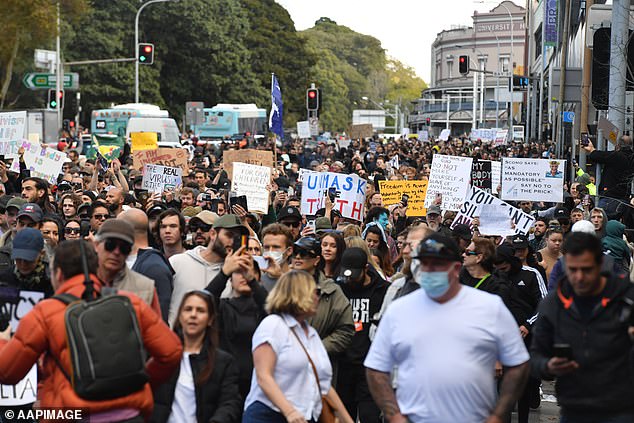 Police estimated the turn-out at about 3,500 people who marched from Victoria Park in  Sydney’s inner west up to Sydney Town Hall

Up to 3,500 people converged on the Sydney CBD last Saturday to protest lockdown restrictions.

Some clashed with police near Sydney Town Hall as fears grew the mostly unmasked protesters would result in a super-spreader event.

More than 50 people have since been arrested and more than 100 personal infringement notices issued, according to NSW Police.

There had now been 11 deaths in NSW as a result of the Indian delta variant outbreak of the virus, with NSW Health confirming the passing of a woman in her 90s at Liverpool Hospital in Sydney’s south-west as the latest death.

Sydney recorded a new record high for this outbreak of 172 cases, bringing the total number of infections to since the outbreak began last month to 2,397 – with 79 new worrying mystery cases.

Greater Sydney, the Blue Mountains, Shoalhaven, Central Coast and Wollongong have now been in lockdown since June 26.