A cowardly attacker who ‘superman punched’ a man from behind in a dark alley fled the scene when he saw his victim lying in a pool of blood, believing he was dead.

Jorde Ewan was charged with causing grievous bodily harm after attacking 45-year-old Michael Murphy in a back alley at Kogarah, in Sydney’s south, on June 15 2017.

Earlier that day his father Stephen Ewan had been involved in a parking dispute with Mr Murphy and had threatening him by saying: ‘I’ll kill you, I’ll get my sons to f*** you up’.

When the pair saw Mr Murphy again hours later Jorde Ewan, 25, ‘ran up to the victim from behind and jumped into the air’ before punching him in the back of the head. 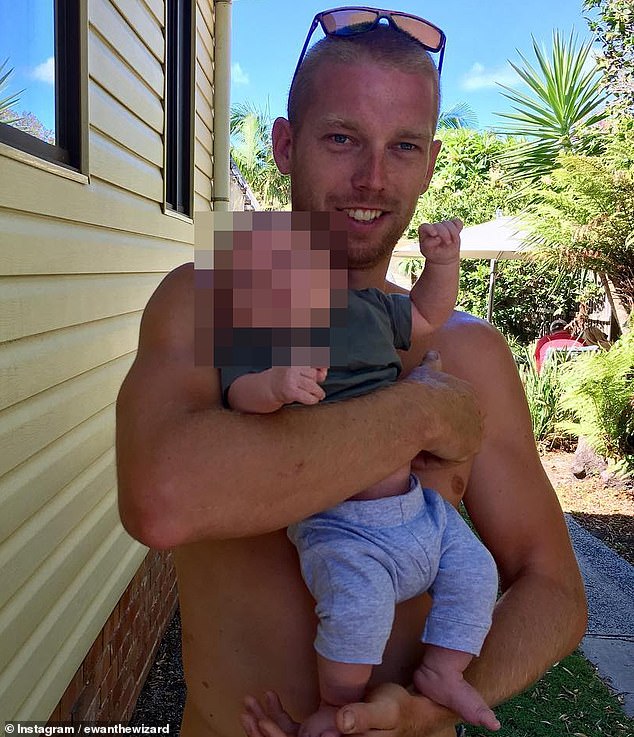 Hours before his son’s shocking attack on the innocent man, Mr Ewan was involved in an argument with Mr Murphy over a car parked in Gray Lane, Kogarah about 11am.

Mr Ewan – who owned a white goods repair business in the lane – had demanded Mr Murphy – who worked at a neighbouring car sales yard – move his boss’ car from the driveway of his shop.

Despite Mr Murphy explaining that he did not have keys to the car, Mr Ewan refused to take no for an answer.

Holding a plank of wood in the air, Mr Ewan then ‘threateningly’ said: ‘I’ll kill you… I’ll get my sons to f*** you up’.

The car yard boss returned to his business in the middle of the argument and moved his vehicle, before calming the situation at which point the two men shook hands.

At about 6.55pm that evening Mr Ewan and his son Jorde returned to the business to meet a friend.

But as they arrived at the white goods shop they noticed Mr Murphy walking along a nearby street, with court documents stating he was searching for his lost dog.

Several minutes later Jorde Ewan and the third man emerged from the roller door of the white goods repair shop. 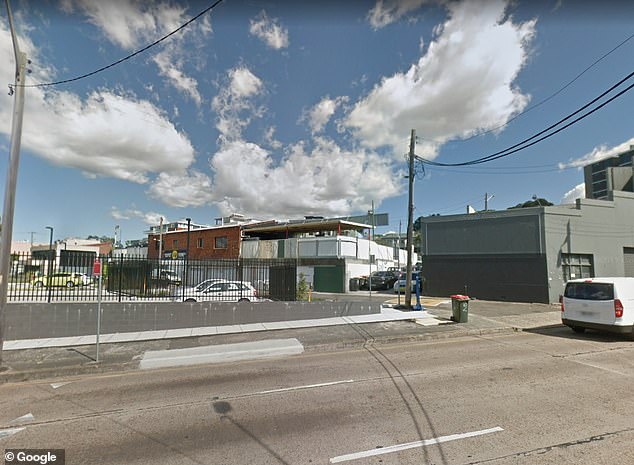 Ewan attacked the 45-year-old man from behind at the intersection of Gray Lane and Rocky Point Road at Kogarah, in Sydney’s south (pictured) 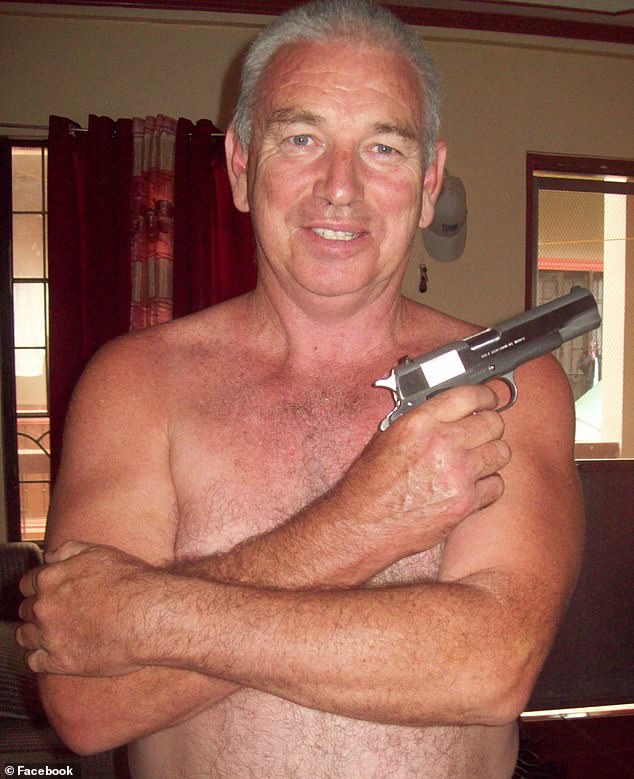 Hours before his son’s shocking attack on the innocent man, Mr Ewan (pictured) was involved in an argument with the victim after asking him to move his boss’s car. Despite the man saying he did not have the keys to the vehicle, Mr Ewan told him: ‘I’ll kill you… I’ll get my sons to f*** you up’

After noticing Mr Murphy still walking along the nearby Rocky Point Road, Ewan ran towards him before ‘superman punching’ him from behind.

Court documents state that because the attack came from behind, the victim ‘did not have an opportunity to defend himself’.

The third man, who had also moved towards Mr Murphy before stopping, witnessed the attack and saw the unconscious victim fall forward and hit his head ‘heavily’ on the footpath.

Ewan and the third man then ran back to his father’s shop, before a witness heard a roller door slam shut and a man yell: ‘He’s dead, he’s dead… run Gordy (or Jorde)’.

Mr Murphy suffered a three-centimetre cut to his forehead and a fractured skull, with a CT scan also revealing a bleed on the brain. 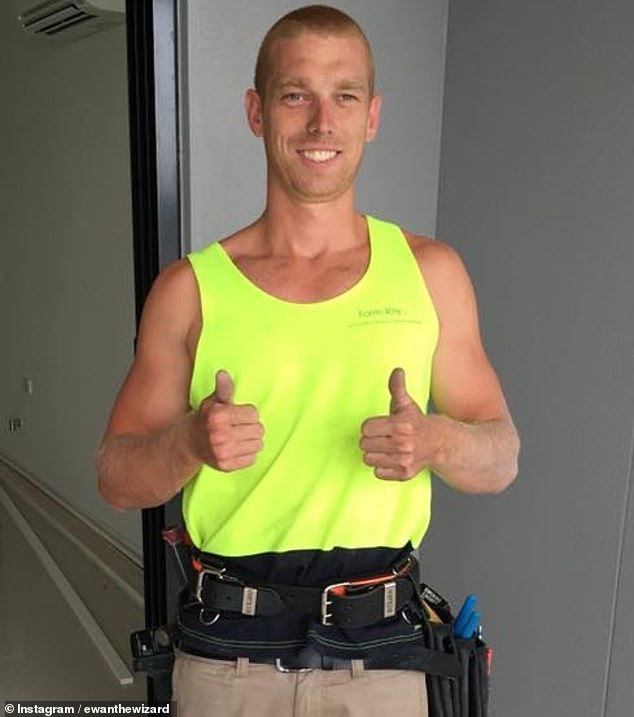 Court documents state that because Ewan’s attack came from behind, the victim ‘did not have an opportunity to defend himself’ 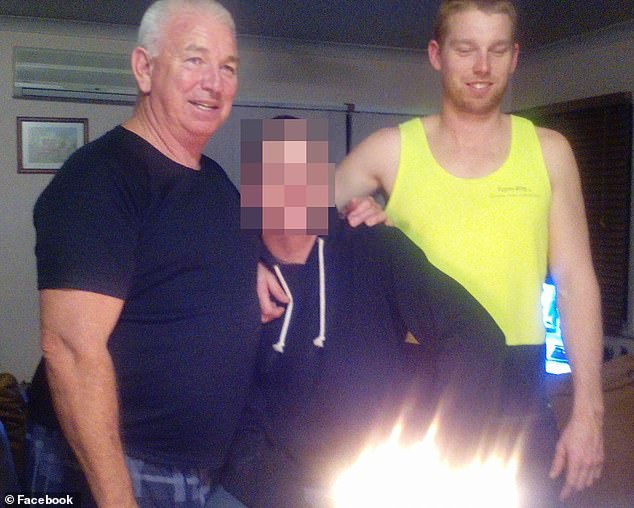 Jorde Ewan’s (right) matter returned to court this week with lawyers appealing his sentence of 15 months in jail, claiming it was ‘manifestly excessive’. The appeal was thrown out

Ewan pleaded guilty to one count of causing grievous bodily harm and was jailed for a minimum of 15 months last September.

But the case returned to court this week after lawyers for Ewan appealed against the sentence imposed Justice Robertson Wright.

During the hearing in the NSW Court of Criminal Appeal on Wednesday, lawyers for Ewan claimed the sentence was ‘manifestly excessive’.

But their appeal was struck down by Justice Des Fagan, meaning Ewan will be first eligible to apply for parole on on 22 September 2019.