A pet owner has been blasted by animal lovers after she was caught walking her frightened cat along a dog beach.

The woman is seen in footage walking her cat on a harness and a retractable lead at a dog beach in Rose Bay in Sydney’s eastern suburbs.

Her cat appears frozen in fear next to a young pup which is not on a lead, as allowed at the popular beach.

A Reddit user shared the video online and warned dog owners in the area to watch out for the woman and her cat in case it led to a horrific tragedy.

A pet owner has been slammed online for walking her terrified cat on a dog beach in Rose Bay, Sydney

‘There is a woman who walks (drags) her terrified cat on a harness and retractable lead down the beach, sometimes they hang out in the trees near the water fountain/main enterance,’ the user wrote.

‘If your dog has prey drive or a distaste for kitties, you may want to remain vigilant.’

He then slammed the woman for her carelessness, saying it was ‘negligent for the poor kitty’ and ‘unfair’ to dog owners walking their pups on the beach and ‘expecting to only encounter other off lead dogs and people’.

‘Not to mention the potential consequences for the pups should anything happen,’ they added.

The user described the clip they included as a ‘short, discrete and kinda crappy video of sad cat on beach’.

Other Reddit users also criticised the cat owner for being dangerously irresponsible. 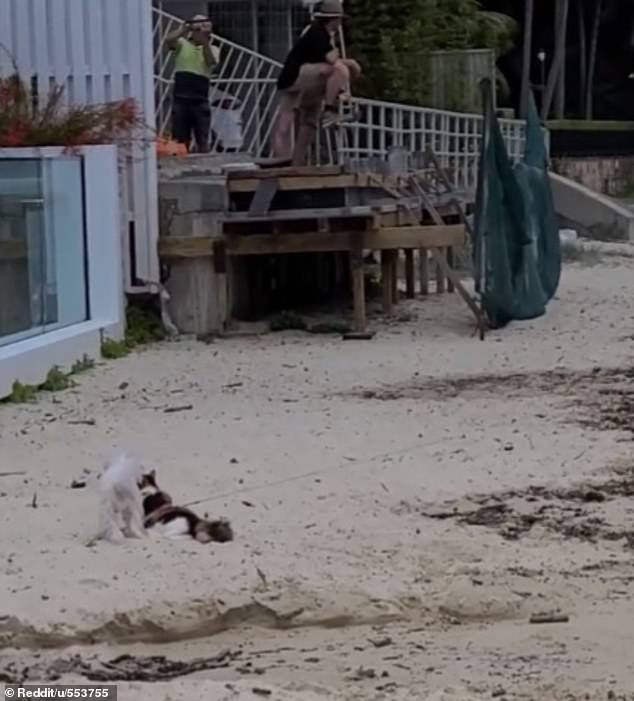 ‘Why the hell would you take a car to a dog park?!’ said one.

‘I cannot imagine being that cruel and irresponsible. The poor cat!’

A second user commented: ‘It sounds like the cat is being put in a situation making it highly distressed which, if the situation is entirely avoidable by the owner, is a form of animal abuse.’

‘Cats do not like being put in unfamiliar territory. The distress is incredibly bad on their heart.’

‘Taking a cat to an off leash park seems bizarre,’ wrote another.

Most respondents suggested that the woman should be reported for walking her cat on a dog beach, others also took issue with the cat being on a lead.

‘Takes her cat to a dog beach? F**k me surely thats reportable, what kind of psycho think’s that’s acceptable?’ said one user.

‘Call the rangers, she is endangering both cat and dogs by her actions,’ remarked another.

A third added: ‘Is there some way to report the woman to RSPCA? As a cat owner, it breaks my heart to hear someone putting their cat in a direct situation of distress.’