Confronting footage has emerged showing a screaming taxi driver being pinned to the ground and handcuffed by police in Sydney’s inner-city.

The man was sitting in his stationary Toyota Camry when a police officer approached his car on Tuesday, around midday.

He had allegedly brought attention to himself by holding down his horn.

Footage of a dramatic arrest in Sydney’s inner-city has emerged, showing a screaming taxi driver being pinned to the ground and restrained with pepper spray (pictured)

Police will allege that an officer asked the driver for his licence, who repeatedly refused.

He was asked to get out of the car, again refusing and subsequently being pulled out by an officer.

In the footage acquired by The Daily Telegraph , the officer can be heard saying: ‘Put your hands behind your back.’

According to NSW Police, the man resisted arrest, resulting in the officer using pepper spray on him.

The 31-year-old taxi driver was issued a Field Court Attendance Notice for unlawful use of horn, failure or refusal to produce an Australian licence, driver of taxi failure to hand driver’s licence to authorised officer, and resist police.

He will appear at the Downing Centre Local Court on September 19. 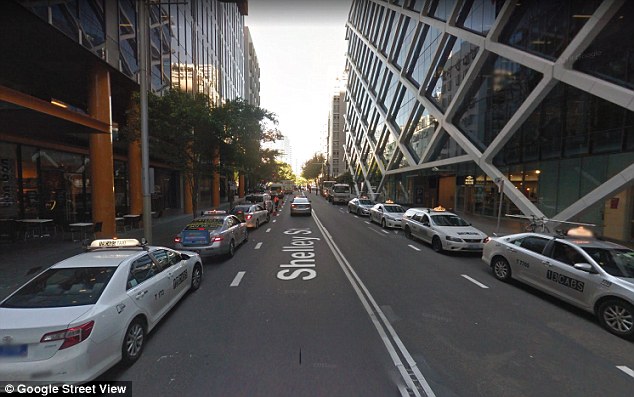