Pictured: Convicted stalker accused of ‘grabbing a teenage girl’s thigh on a bus while pleasuring himself in broad daylight’

By Sophie Tanno and Brittany Chain For Daily Mail Australia

A man charged with a sex attack on a bus in Sydney’s inner west will not be released on bail because he is a ‘danger to the community’.

Timothy Patrick Palmer, 53, was travelling from Marrickville, in Sydney’s inner west, when he allegedly touched a 17-year-old girl’s thigh while pleasuring himself on Sunday.

Palmer has been denied bail to go home for Christmas after appearing before Parramatta Local Court on Monday, 9News reported.

He will remain behind bars until his next court appearance on January 7.

The prosecutor described Palmer’s actions as calculated and predatory and said he was a ‘danger to the community’.

Parramatta Local Court told this was not the 53-year-old man’s first offence and he had previously spent time in jail for stalking and intimidating.

His young victim was walking through a petrol station at about 11am on Sunday when the man – who was not known to her – approached her.

Police claim he attempted to speak to her, but she ignored him and made her way to a nearby bus stop on Illawarra Road.

But the man followed her and tried once more to speak with her, before following her onto the bus and taking the seat next to her.

It was there that the man allegedly touched her thigh ‘inappropriately’, while performing an indecent sex act on himself.

Police were able to charge him when a number of members of the public intervened and detained him until police could arrive.

He was taken to Newtown Police Station and charged with sexually touch another person without consent, stalk/intimidate intend feat physical etc harm, and carry out a sexual act with another without consent. 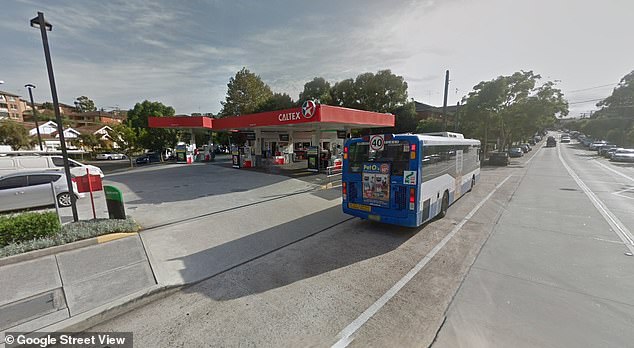