During a segment on The Fitzy & Wippa Show, Isaac decided to call his mum Rochelle and pretend that he was making the move from AFL to NRL.

However, his mum was too smart to fall for the trick and immediately figured out that it was a stitch up.

‘This is a joke … You’ve got me on loudspeaker and the Swans are having a bit of a giggle,’ she said.

Isaac wouldn’t give up the ruse and doubled down until Rochelle started to believe him.

‘How would league go … f**l me drunk, it’s the dumba** game,’ she responded, which sent Fitzy and co-host Michael ‘Wippa’ Wipfli into fits of laughter. 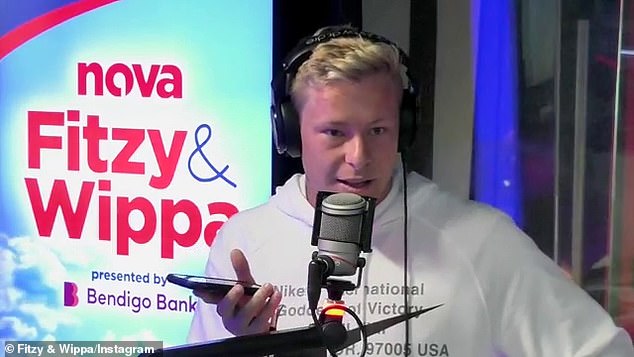 Tricky! During a segment on The Fitzy & Wippa Show, Isaac decided to call his mum Rochelle and pretend that he was making the move from AFL to NRL

Fitzy has earned a reputation for pulling hilarious and sometimes outrageous pranks, both on the air and off.

Last year, the radio star shared a shocking clip on Instagram showing him making his young sons believe that he ate the family dog’s testicles after getting the animal desexed.

In the clip, shared to the Fitzy and Wippa Instagram page, Fitzy explained the stitch up and shared footage of the moment his sons Hewston, 11, and Lennox, seven, thought he ate the testicles.

But Fitzy had really put some lychees into a specimen container to trick his sons. 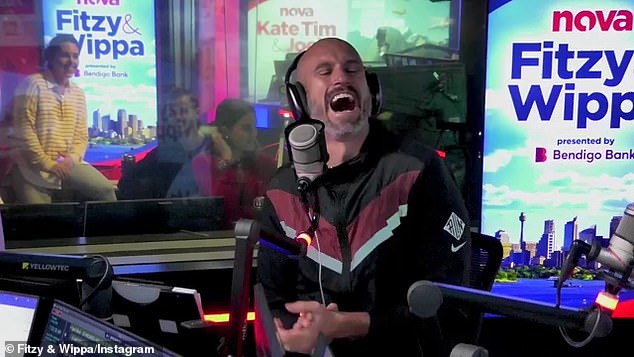 ‘How would league go … f**l me drunk, it’s the dumba** game,’ Isaac’s mum responded, which sent Ryan ‘Fitzy’ Fitzgerald (pictured) into a bout of laughter

‘Beastie got desexed, they had to take his assets out, he’s been a bit sore, he’s been trying to lick that area so unfortunately we’ve had to put a G-string on him,’ Fitzy explained at the start of the clip.

‘But before he got home the boys have been asking a few questions, saying, ”do they actually cut his b**ls out?”

Fitzy said had a ‘light bulb moment’ when his boys asked the question and he thought up the prank. 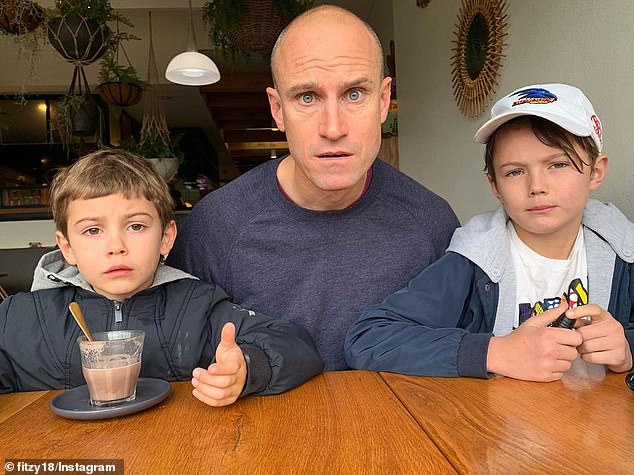 Sorry boys! Ryan left his sons Hewston and Lennox ‘scarred’ last year when he played a cruel prank on them after getting the family dog desexed

‘So let’s see how the boys react when I take a bite out of one of them,’ he said, holding up a lychee.

His sons can then be seen looking horrified while watching their father eat a lychee, after he said that the supposed testicles are ‘good nutrition.’

On the Fitzy and Wippa show the next day, Wippa said that the boys would be ‘scarred’ by the prank.

‘I still haven’t told them yet… You gotta play with their minds for a few days before you reveal it,’ Fitzy laughed. 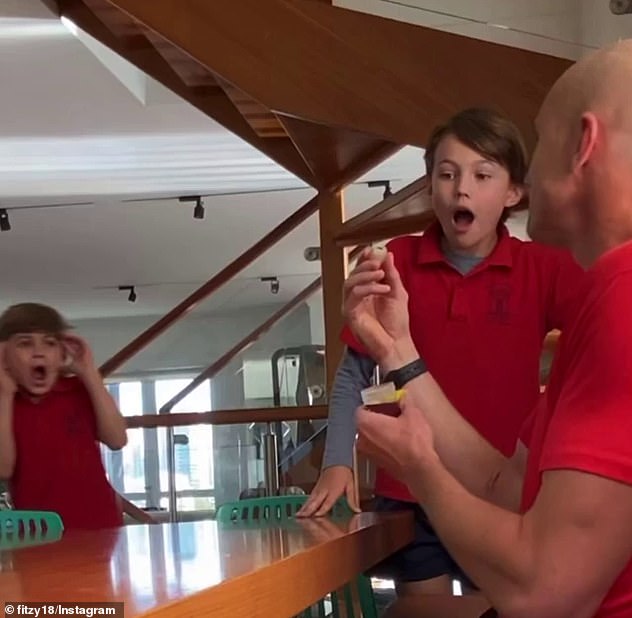 Horrified: But Fitzy had really put some lychees into a specimen container to trick his sons