Sydney to Melbourne ‘hyperloop’ could take only 53 minutes

Supersonic-speeding pods that could get you from Sydney to Melbourne in less than an hour just had their first test run. 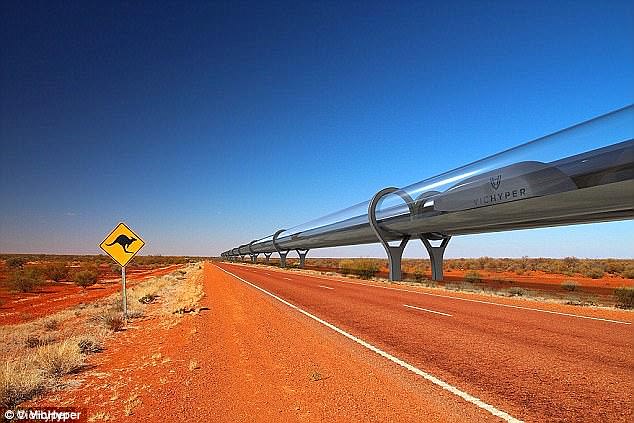 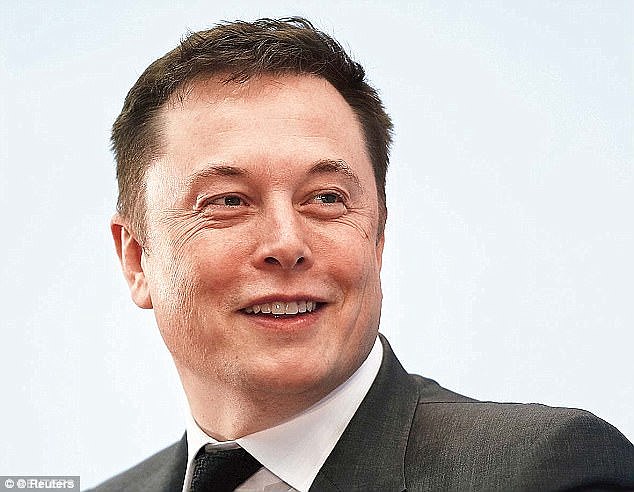 The tech billionaire said the technology would eventually allow for travel at 1,200km/h, and RMIT engineers already have a plan for a 53-minute route between Australia’s two biggest cities.

The journey time would eclipse the three hours predicted for high-speed rail linking the state capitals.

VicHyper chief executive Zac McLelland in June claimed the loop could be built within five years for about $40 billion.

Passengers would sit in pods which would then be accelerated with magnets.

Connecting Sydney and Melbourne would create a ‘mega-region’ with the area in between turned into an economic powerhouse.

White-knuckle footage from Mr Musk’s competition shows a pod-view perspective of the run through the test tube, as it accelerates to staggering speeds.

Eventually, Musk said the system could even ‘go supersonic’ – but, the ride will be much smoother, meaning ‘no spilt drinks’.

He also reassured his Twitter followers the strobe lights in the video were only for testing purposes, and said the passenger version would also have more comfortable levels of acceleration.

‘Might be possible to go supersonic in our test Hyperloop tube, even though it’s only 0.8 miles long. Very high accel/decel needed…’ 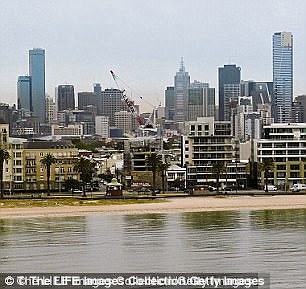 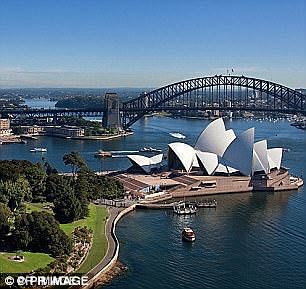 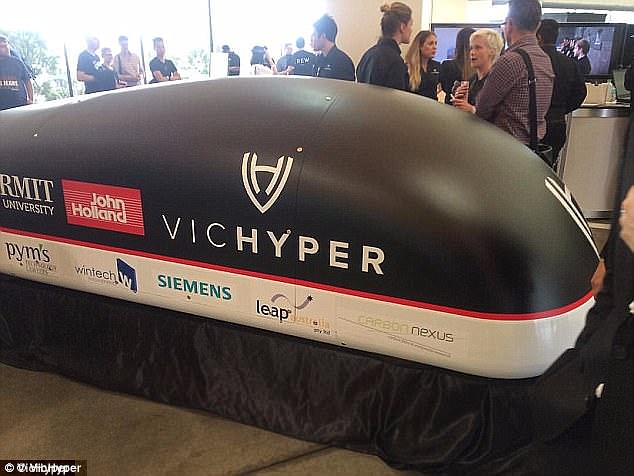 ‘Btw (by the way), high accel only needed because tube is short. For passenger transport, this can be spread over 20+ miles, so no spilt drinks.’

‘Will run the SpaceX pusher sled later this week and see what it can do,’ Musk tweeted a few hours later.

Though Mr Musk champions the technology he isn’t actually developing it, rather leaving the concept as open source for anyone to work on.

He does own The Boring Company, which builds high-speed underground tunnel s for vehicles – and potentially hyperloop pods – to move through.

The company just gained approval to build a 3.2km test tunnel near its Los Angeles headquarters, 13 metres below ground.

The dry run will prove whether the plan will actually work – and, if it doesn’t, the city can request the tunnel is filled with concrete or soil.

The tech boss took to social media this week to share the tunnel’s progress, revealing it is now big enough to fit a Tesla Model S. 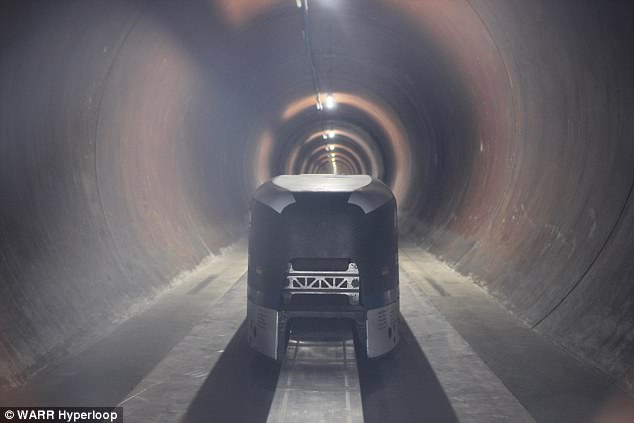 The footage came from the second Hyperloop competition. The winning team, WARR Hyperloop, managed to hit over 200 miles per hour in the test track 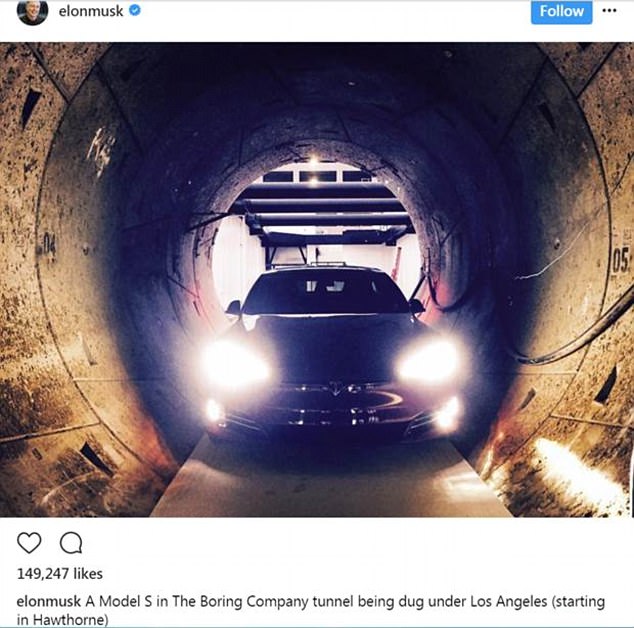 The tech boss took to social media to share progress on his traffic-beating tunnel beneath Los Angeles, revealing it is now big enough to fit a Tesla Model S. Musk was given the green light last week to built a two-mile-long test track under the city 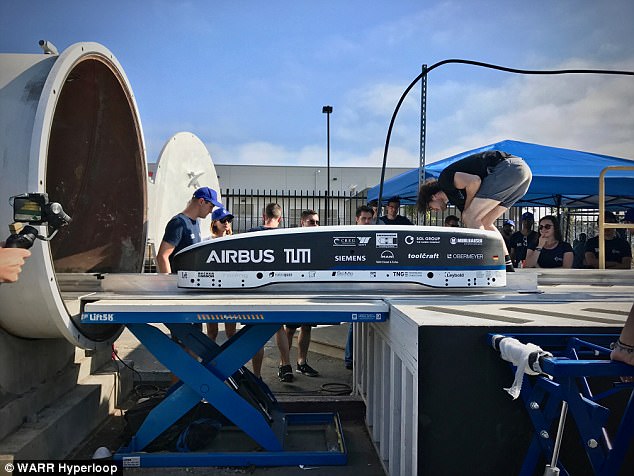 Musk’s other radical transportation system made progress this weekend as well, as the firm wrapped up its second Hyperloop competition. The winning pod from WARR Hyperloop is shown above

‘Just installed steel skeleton of the car/pod elevator. Should be operating next week’, the SpaceX founder tweeted today, with a five second video of the site.

This marks a major step in Musk’s plans to build a transport network beneath the city.

He recently completed the first successful test of the passenger pod, marking what he said was the debut of ‘the dawn of a new era of transportation’.

The Hyperloop One XP-1, the company’s first-generation pod, accelerated for 300 meters and glided above the track using magnetic levitation before braking and coming to a gradual stop. 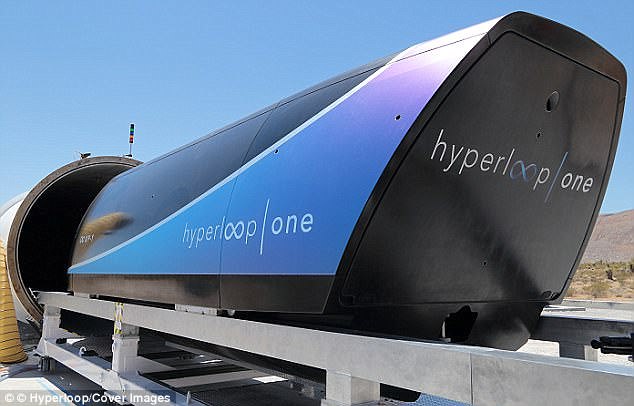 Several firms including Hyperloop One (pictured) are already building test tracks using Elon Musk’s technology. Now, it appears Musk is set to build one himself 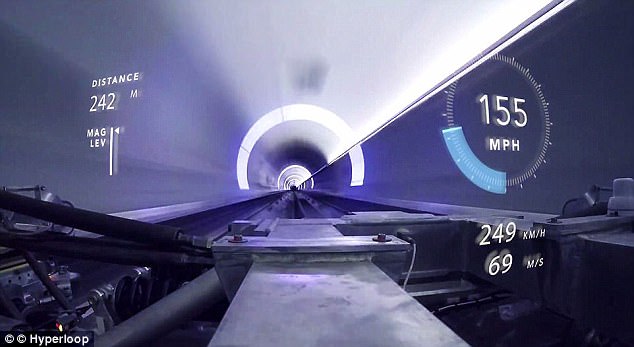 During phase 2 on July 29th, Hyperloop One achieved record speeds, in a tube depressurized down to the equivalent of air at 200,000 feet above sea level. Pictured, the view from an on board camera during the test 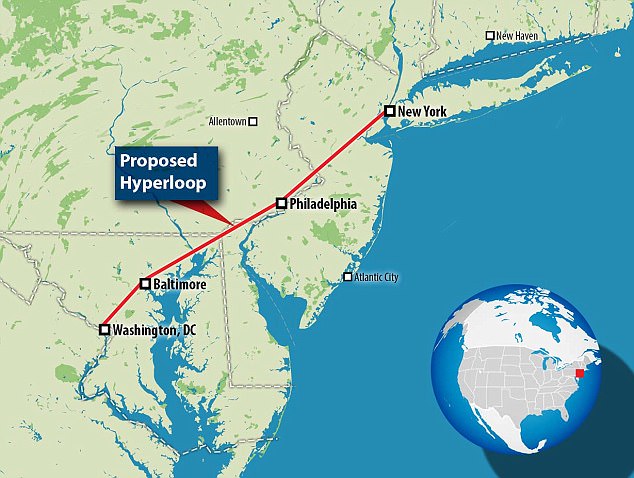 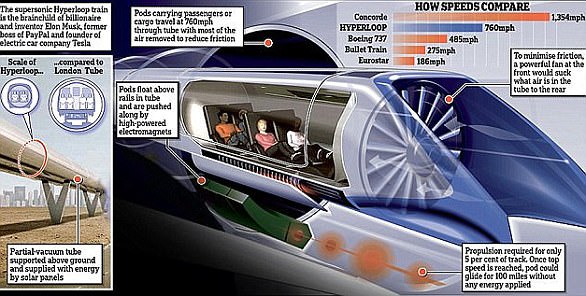 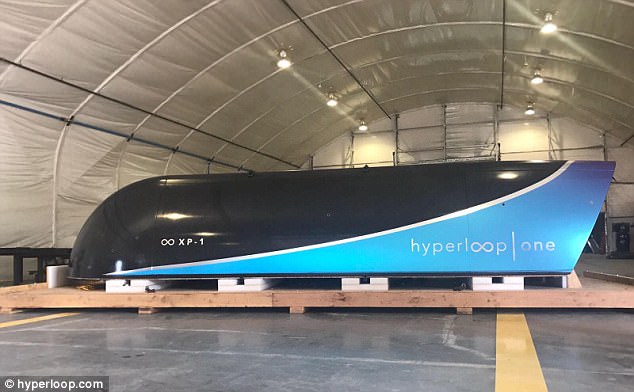 Along with the announcement of the ground-breaking test, the firm has also revealed a look at the XP-1 vehicle – the pod that will soon be used for full systems tests. It has a carbon fiber and aluminium aeroshell with a levitating chassis, for ‘suspension, lift, guidance and propulsion’

In a test that lasted just 5.3 seconds, the vehicle managed to hit 70 miles per hour using just 100 feet of the motor at the DevLoop test track in Nevada.

While it’s a far cry from the 760 miles per hour proponents of the Hyperloop boast it will one day achieve, the firm says the test marks an important milestone ahead of the completion of the linear motor, as ‘the longer the motor, the faster we can go.’

The tweet follows images released in June showing the Boring Company’s own underground electric buses that it plans to use in the tunnels.

The vehicles, based on the same ‘electric sled’ that owners will drive their cars onto, have space for seated and standing passengers.

They are mainly glass – even through they are designed to travel underground.

Musk has come under fire repeatedly from experts claiming the tunnels are impractical and would be impossible to implement.

But in June, the firm published an FAQ on its website outlining how it plans to achieve his vision.

‘The key to making this work is increasing tunnelling speed and dropping costs by a factor of 10 or more – this is the goal of the Boring Company,’ it says.

‘Unlike flying cars, tunnels are weatherproof, out of sight and won’t fall on your head,’ it explains.

‘A large network of road tunnels many levels deep would fix congestion in any city, no matter how large it grew (just keep adding levels).’

Musk recently said he had ‘verbal government approval’ to build an underground tunnel to transport passengers between New York and Washington DC in just 29 minutes.

Musk tweeted the tunnel will run via Philadelphia and Baltimore, and use his Hyperloop technology.

If completed, it would become the world’s longest tunnel.

Critics have slammed the plan as completely unrealistic as it would require a mass of permits and huge disruption as hundreds of tunnels and access ‘lifts’ are dug.

However, Musk says the area is ripe for innovation.

‘Currently, tunnels are really expensive to dig, with some projects costing as much as $1 billion per mile,’ the new FAQ says.

‘In order to make a tunnel network feasible, tunnelling costs must be reduced by a factor of more than 10.’

The key to this is smaller tunnels that can be dug more quickly, the FAQ says.

‘To build a one-lane road tunnel, the tunnel diameter must be approximately 28 feet.

‘By placing vehicles on a stabilized electric sled, the diameter can be reduced to less than 14 feet.

Reducing the diameter in half reduces tunnelling costs by 3-4 times.

‘Secondly, increase the speed of the Tunnel Boring Machine (TBM).

‘A snail is effectively 14 times faster than a soft-soil TBM.

‘Our goal is to defeat the snail in a race.’

Musk envisions a new breed of smaller, more powerful TBMs with triple the power of current machines that can tunnel continuously, making ‘hyperloop’ technology a feasible option for Australia.