Kids’ toys, jewellery and a BRICK: The bizarre things Sydneysiders tried to flush down their toilet – with flushed wet wipes costing $8MILLLION a year

Children’s toys, jewellery, and even a brick are just some of the bizarre items found clogged in wastewater systems in Sydney this year – with most having been flushed down the toilet.

Sydney Water has released a new campaign warning residents about the ‘dos and don’ts’ of flushing things down toilets or tipping certain liquids down kitchen sinks.

The ‘It’s Best to Bin It’ motto will be shown on digital advertisements around the city after it was revealed one in every two people are flushing away items that should instead be chucked into the rubbish.

The effects can lead to damages to the environment once these items make their way into wastewater plants as well as a hefty plumbing bill.

Household products like tissues, wipes, sanitary items and hair are all commonly found in sewage without residents realising the damage just one flush can have.

Children’s toys, jewellery, and even a brick are just some of the bizarre items found clogged in wastewater systems in Sydney this year – with most having been flushed down the toilet

In just the past three months Sydney Water crews have been called to 7,000 faults and blockages in water systems with teams finding money, watches, earphones and lighters among other wacky items.

‘The reality is wet wipes, fats, oils and grease and other items like cotton buds, tissues and sanitary products are a major threat to our wastewater network,’ Sydney Water’s Head of Customer, Strategy and Engagement, Maryanne Graham said.

She said 75 per cent of blockages found in water systems were due to people flushing wet wipes down the toilets.

‘The cost to Sydney Water of removing the 500 tonnes of flushed wet wipes from the wastewater system is upwards of $8million every year,’ Ms Graham said.

‘It’s all about highlighting the simple things our customers can do to save on their own clean-up bills and protect the environment, by remembering ‘it’s best to bin it.’

From a survey on residents in Greater Sydney, 56 per cent said they thought it was fine to flush tissues down the toilet. 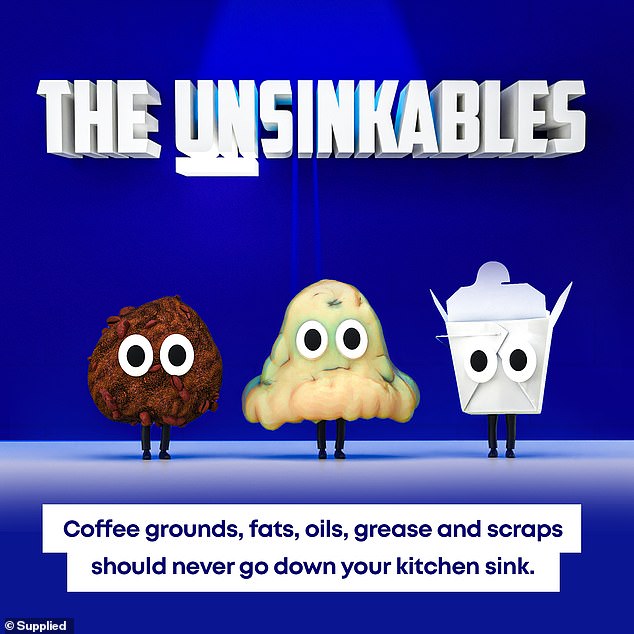 However it’s items like these that can have detrimental impacts on the environment as milk is highly pollutive.

Meanwhile, foods like coffee and tea leaves will soon enough lead to a large clog in the kitchen sink pipes.

The Sydney Water team are hoping that by showing families the ‘unflushable’ and ‘unsinkable’ items, that the environment will be a lot better off.

WHAT SYDNEYSIDERS THINK IS OK TO PUT DOWN THE TOILET