Thousands of Sydneysiders have been ordered to evacuate their homes as the city was battered by a third consecutive night of torrential rain, howling winds and flooding.

More wild weather is on the way, with the drenched city to receive another 35mm on Tuesday on top of the 67.2mm in the last 24 hours as hazardous surf conditions and massive swells lash the coastline.

A severe weather warning of heavy rain and damaging winds remains in place for Sydney, the NSW Central Coast and Hunter regions, with Gosford, Cessnock, Maitland, Dungog and Kulnura all in the firing line.

It’s been another night of chaos in Sydney as life-threatening floodwaters cut off more suburbs and left vehicles stranded on submerged roads.

SES crews received 500 requests for assistance in the space of 12 hours, one fifth of them flood rescues.

Chipping Norton residents in Sydney’s south-west were among the latest ordered to evacuate in the wee hours of Tuesday morning, along with parts of the north-west, including Ebenezer, Lower Portland, Mulgrave, Mulgrave South, Vineyard and McGraths Hill.

The Hawkesbury River at Windsor reached flood levels for the third time within months and could exceed levels hit in March.

Parts of the city’s south received up to 200mm on Monday night which sparked evacuation orders in Woronora and Bonnet Bay. 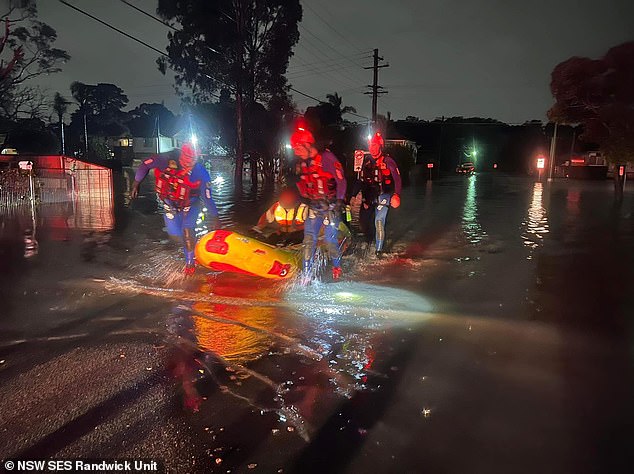 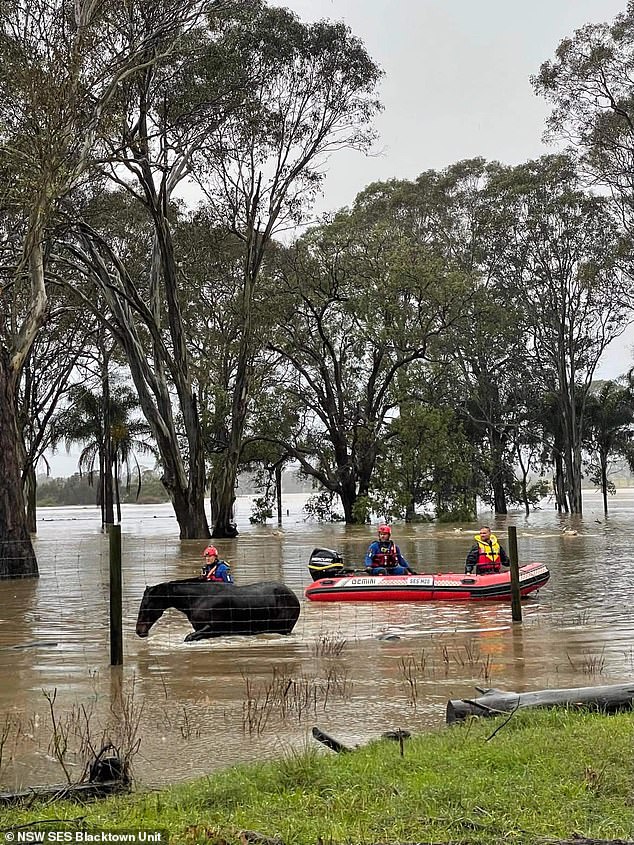 It’s been a 48 hours for SES crews. Pictured are crews rescuing horses from flooded paddocks at Berkshire Park in Sydney’s north-west

The harbour city saw heavy falls of 50mm on Monday night while some areas towards the Illawarra region got a whopping 200mm.

‘We still do have a severe weather warning for heavy rain fall that covers Sydney’s Eastern Suburbs and up the Central Coast and toward the Hunter and that will very much be the focus of rain today,’ Bureau of Meteorology’s Jonathan How told the Today show on Tuesday.

‘We’re seeing heavy showers push through eastern parts of Sydney right now with even heavier falls up into the lower Hunter, so there is still 20 to 50mm to come.’

The relenting rain is expected to ease in the coming days.

‘We are reminding people that these floodwaters will remain very high, well after the rain has stopped,’ Mr How warned.

‘It will take days, if not a week, to start to see these floodwaters recede. So the danger isn’t over, even after the rain has stopped. 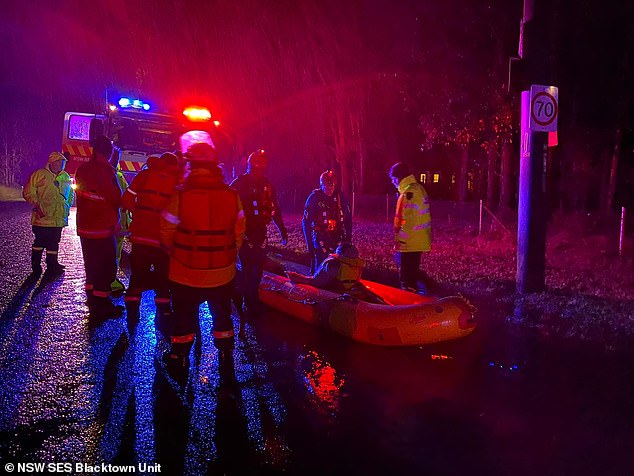 The NSW SES has been inundated with more than 500 requests for help in the space of 12 hours, including 100 flood rescues.

‘The majority of them in the Hawkesbury-Nepean river systems but also across into the Georges River and the Woronora River,’ SES chief superintendent Ashley Sullivan said on Tuesday .

‘The weather is meant to stick around for at least today and tomorrow, so  threat will remain with those flood warnings for the rest of this week.

We do ask motorists, particularly, to stay off the road wherever possible.’ 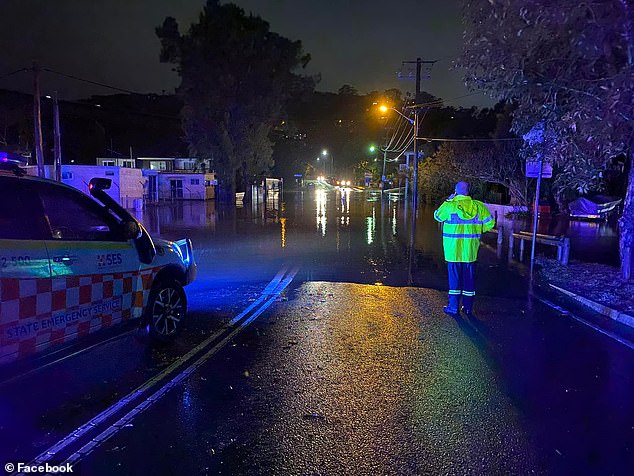 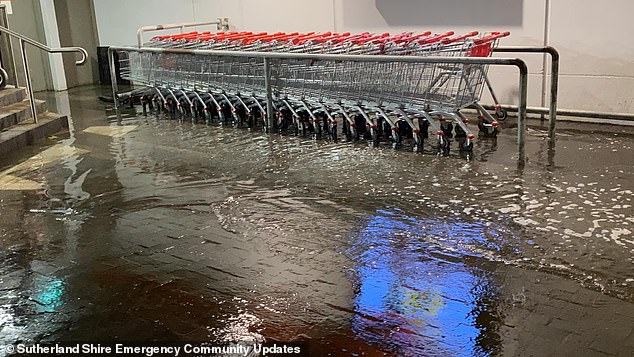 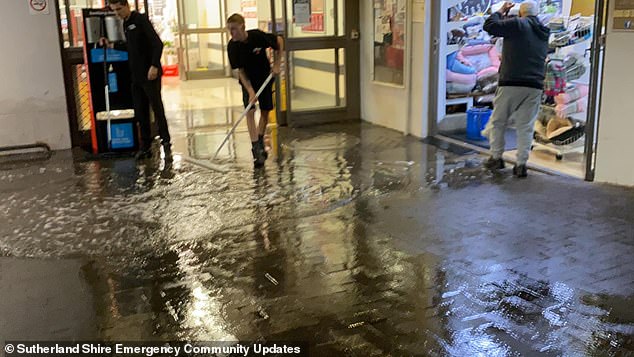 More than 35,000 Sydneysiders have been forced to evacuate in recent days, with a a natural disaster declared in 23 local government areas.

The weather bureau warned the heavy deluge battering Greater Sydney,  Hunter Valley, Illawarra and the Central Coast is finally forecast to ease on Friday meaning more misery is yet to come.

But those in the 23 LGAs affected by the severe storms and flooding since June 27,  will now be eligible for disaster relief payments under Monday evening’s declaration.

The payments are jointly funded by the NSW government and the Commonwealth. 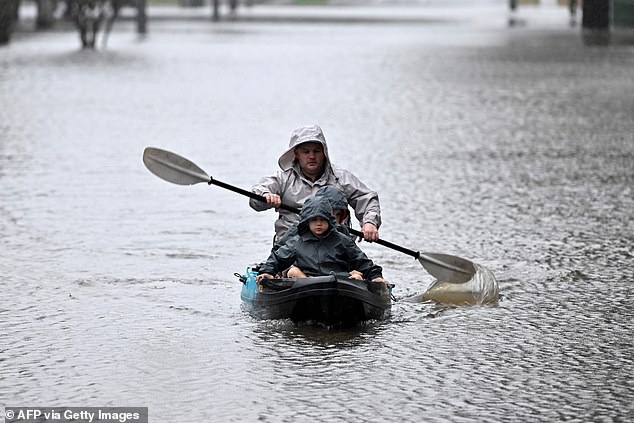 A man and a boy are pictured escaping floodwaters in a kayak as the Hawkesbury River overflows in Windsor, northwest of Sydney 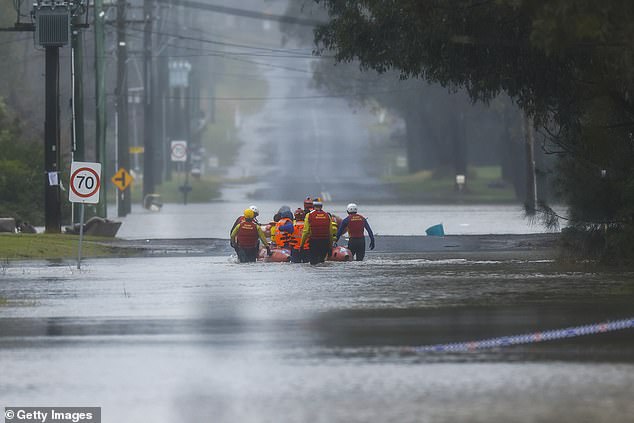 A natural disaster has been declared in 23 LGAs as a brutal rain bomb wreaks havoc across NSW (pictured, rescue crews in Bligh Park) 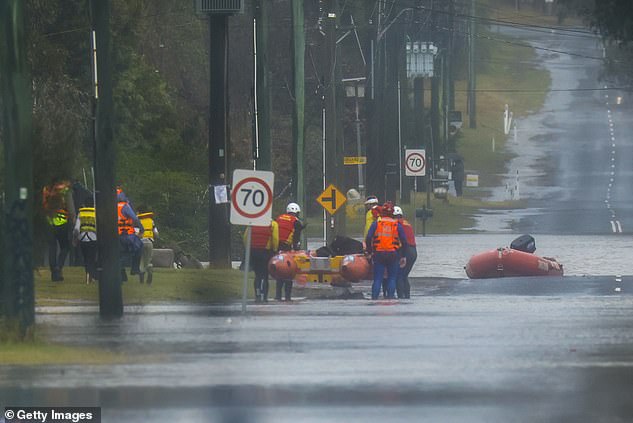 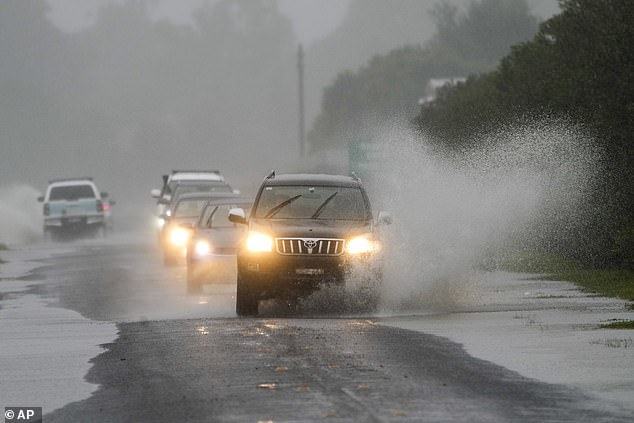 Pictured: Cars drive through floodwaters in Sydney’s Richmond on Monday

It comes after Federal Emergency Management Minister Murray Watts earlier on Monday said the flooding would not be declared a national emergency.

‘At this stage, the advice is this particular disaster, while severe, does not reach the level of the threshold required to invoke a national emergency declaration,’ he said.

‘Having said that, it is likely the NSW government will declare this flood as a disaster from a NSW perspective.’

Authorities have warned despite conditions easing, the dangers associated with damaging winds, coastal erosion and powerful surf would remain.

‘We are not out of the danger yet,’ NSW SES Commissioner Carlene York warned as fresh evacuation orders were issued for Liverpool and Milperra.

The SES ordered residents in low-lying areas to immediately evacuate as river levels were seen rising rapidly upstream of Liverpool, in the city’s southwest.

In nearby Cabramatta, 10 people, including two pensioners, were rescued from a home surrounded by floodwaters by members of NSW Fire and Rescue.

State Premier Dominic Perrottet said it was important to learn from previous flood events as there was ‘no doubt’ they were becoming more common.

He said he was impressed by the response from the federal government in comparison to other flood events just months earlier.

Many areas in NSW have been inundated with a months worth of rain in just a couple of days over the weekend and on Monday.

As of 3pm on Monday, the SES had fielded 3,900 requests for assistance and performed 85 flood rescues after authorities warned of another busy day.

Residents in some parts of western Sydney have been given the green light to return home with authorities urging locals to avoid travelling through floodwaters.

The Central Coast and Newcastle are expected to receive between 50 to 100mm of rain on Tuesday, while Sydney will be hit with a lesser 15 to 20mm.

Just four mm of rain is due to hit the Harbour City on Tuesday while only six mm are forecast for Friday.

Conditions are set to ease as the east coast low causing the weather hell moves off the coast – however showers will linger for the rest of the week. 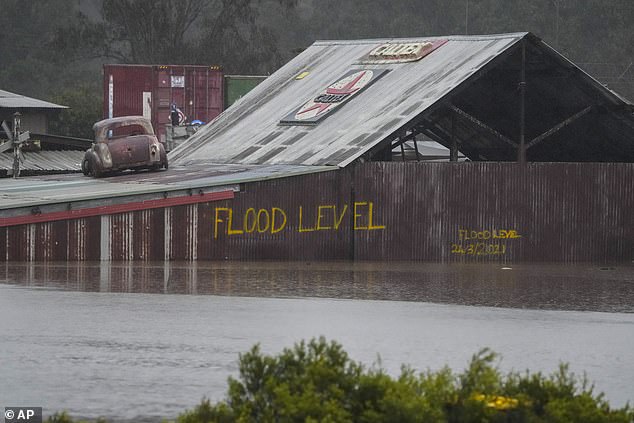 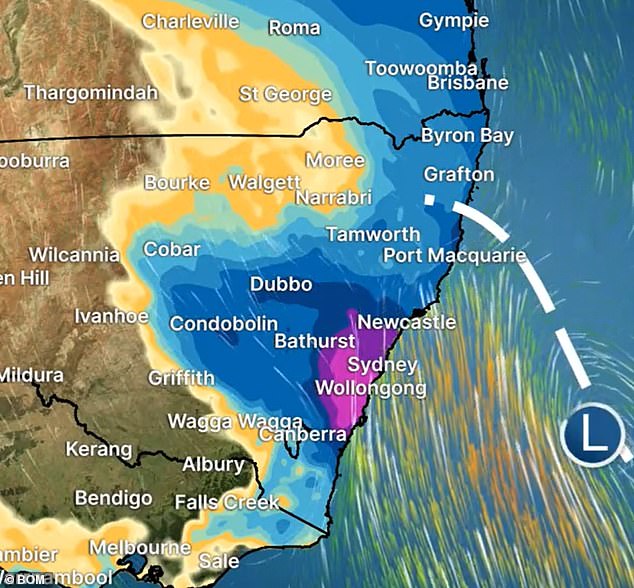 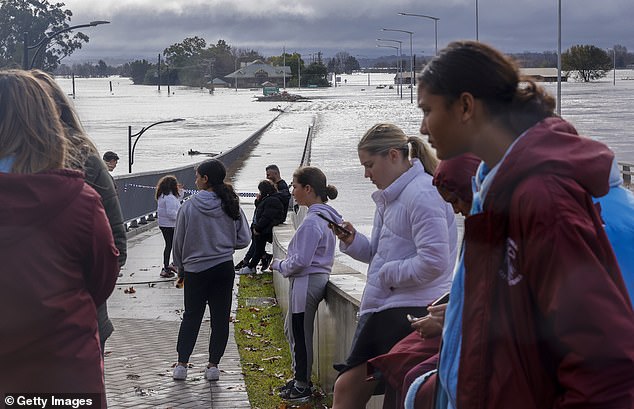 A low-pressure system hovering over the Tasman Sea pushing moisture towards the east coast is causing the wet weather (pictured, residents cut off by floods in Windsor) 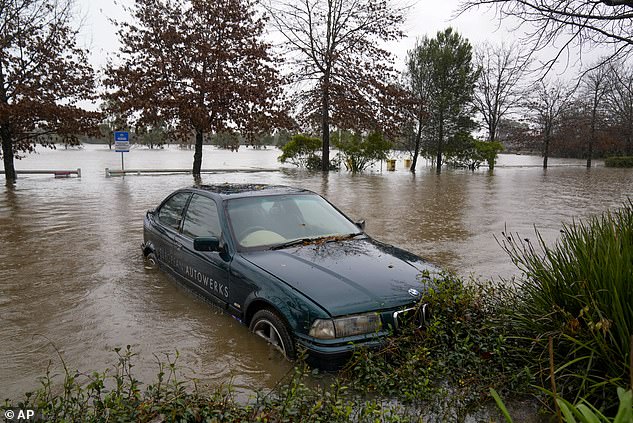 The Central Coast and Newcastle are expected to receive between 50 to 100mm of rain on Tuesday, while Sydney will be hit with 15 to 20mm (pictured, a flooded car in Camden)

A low-pressure system hovering over the Tasman Sea pushing moisture towards the east coast is causing the wet weather.

Dozens have been forced to abandon their homes and businesses as the swollen Hawkesbury and Nepean Rivers rapidly rise and overflow.

BOM issued a minor to major flood warning for the Georges and Woronora Rivers where levels hit 2.5metres by 9pm on Monday night.

Anyone in low-lying parts of Woronora and Bonnet Bay on the Woronora River in the Sutherland Shire, were told to get out before 7pm and 8pm.

Meanwhile, the swollen Georges River is expected to reach a peak of 4.2m by midnight on Monday, almost double its normal levels. 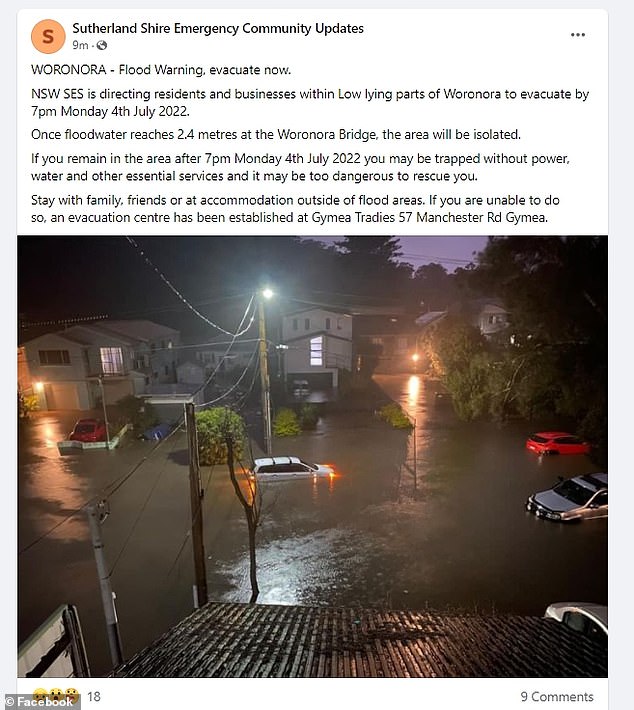 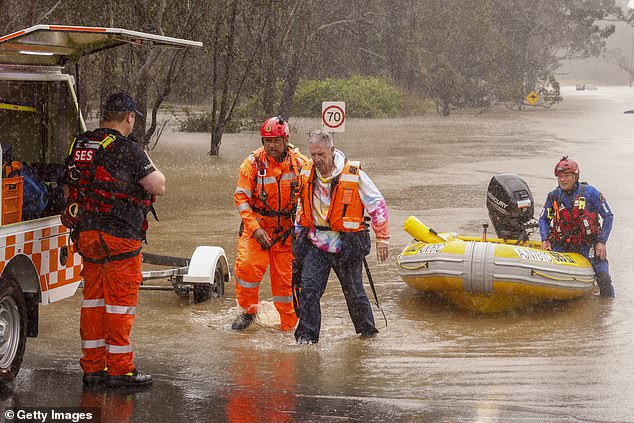 A man is rescued from his car by State Emergency Service workers in Windsor on July 4, 2022 in Sydney, Australia

‘Once floodwater reaches 2.4m at the Woronora Bridge, the area will be isolated,’ the SES said on social media.

‘If you remain in the area after 7pm Monday, you may be trapped without power, water and other essential services and it may be too dangerous to rescue you.’

Many areas on the Hawkesbury including Windsor, Sackville and Wisemans Ferry remain mostly underwater after receiving a drenching over the last 24 hours.

The SES earlier on Monday issued evacuation orders for Cattai, Sackville North, Londonderry and Richards as the river started to rise.

Thirty suburbs are under threat of going underwater while 74 evacuation orders and 62 warnings affecting an estimated 32,000 have been put in place. 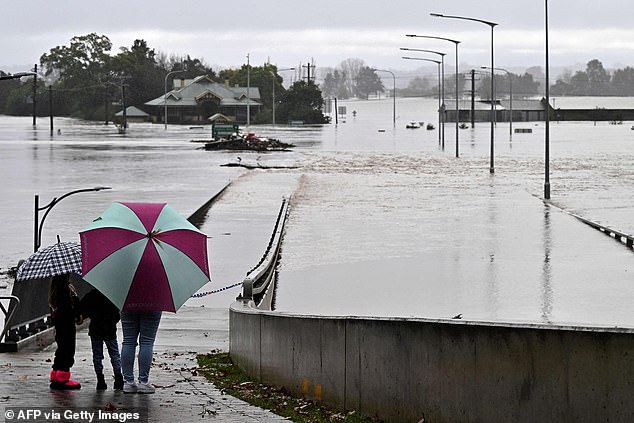 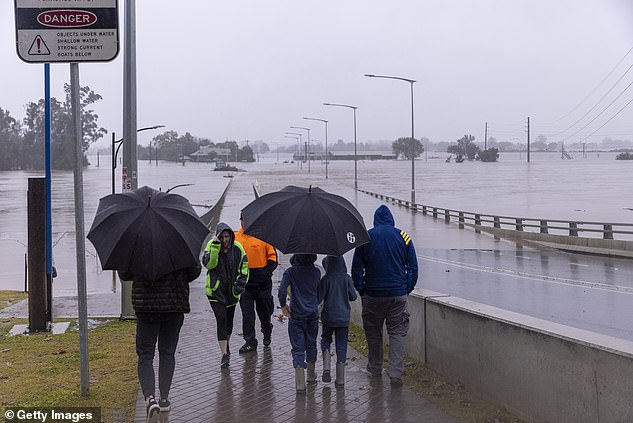 Camden is among the worst places hit with the town submerged for the fourth time this year while parts of Lansvale, Chipping Norton and Moorebank are underwater.

The State Emergency Service has responded to 3,500 calls for help since the weekend, with 400 calls made overnight, and performed about 120 flood rescues, with that number expected to increase.

‘Things are happening quicker. The risk… has increased significantly.’

One man has already died in the severe conditions after his kayak capsized by the Paramatta River in Sydney’s Abbotsford on Sunday.

THE FOUR DAY WEATHER FORECAST IN YOUR CITY