Sydney weather: More than 10,000 homes are still without power days after cyclonic winds

More than 10,000 homes are still without power days after cyclonic winds hit Sydney – with one worker claiming job cuts are to blame for massive delays in restoring electricity

Thousands of people are still without power following Tuesday’s devastating storm – with one Ausgrid worker claiming job cuts are to blame.

More than 50,000 people in Sydney suburbs such Chatswood, Gordon, East Killara and Wahroonga were left without power due to the cyclonic winds on Tuesday.

More than a fifth are still without power as of Saturday, with residents needing to borrow generators to power their fridge.

More than 13,000 people are still without power following Tuesday’s storm – including suburbs such as Chatswood, Gordon (pictured), East Killara and Wahroonga 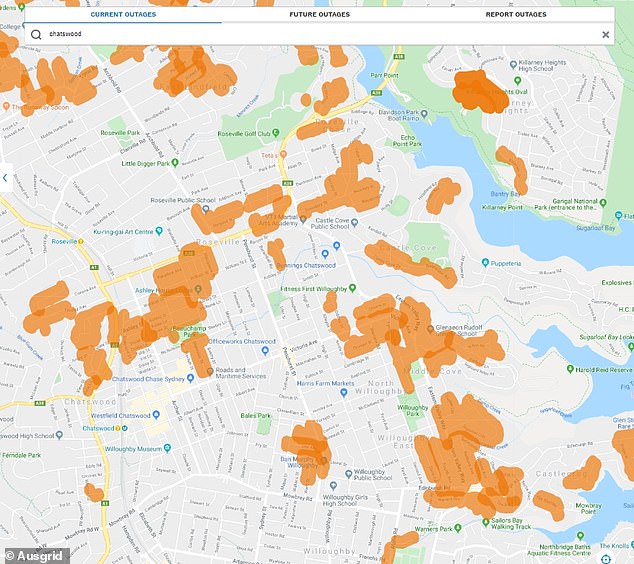 More than a fifth are still without power (orange spots) as of Saturday, with residents needing to borrow generators to power their fridge

Residents have been told to prepare for outages well into the weekend.

Since September, 325 Augsrid workers have been let go and the majority of those people would have been working to repair damage from the storm.

‘The government got their massive amount of money from selling Ausgrid and they don’t really care what the poor public are going to go through.’

A spokesperson disputed this fact and said the lengthened outages were because of recent weather events.

‘The restoration task is one of making safe, removing vegetation, rebuilding the network and then restoring supply. It is not as simple as restringing cable or repairing damage after a typical storm,’ a spokesperson told The Sydney Morning Herald. 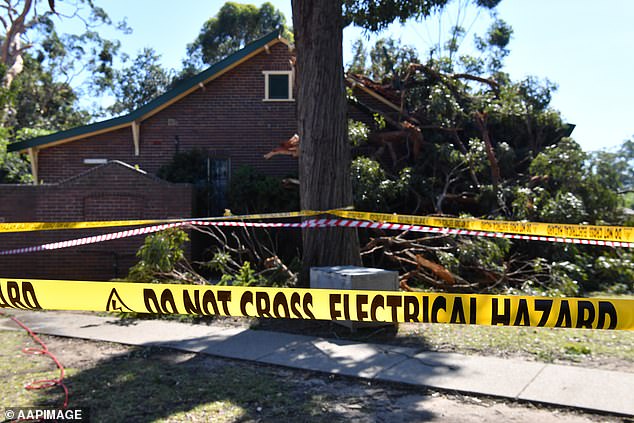 ‘The main difficulty in reconnecting remaining homes and businesses is the requirement to rebuild, almost from scratch, critical parts of the network.’

Electrical Trade Union secretary Justin Page said another contributing factor to the delays was the lack of help from other resources.

Companies did supply workers and tools but at a lower level than they previously had.

Meanwhile State Emergency Services are trying their best to team up with Ausgrid to manage fallen power lines as well as smashed homes, fences and fallen trees. 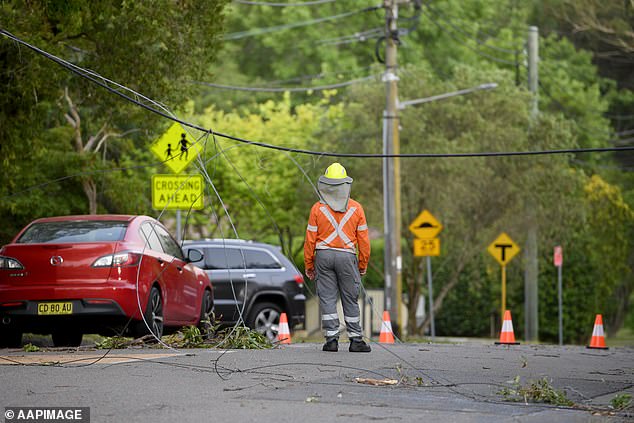 The State Emergency Service’s Hornsby unit answered 200 call outs during the week due to the storm.

The unit’s deputy commander Chris Mawn told the Sydney Morning Herald:  ‘Volunteers are fatigued, and we are stretched in that we’re supporting the RFS in their bushfire efforts as well as the storm.

He said some of the RFS volunteers had come to help them and ‘repay the favour’.

A Public Information and Inquiry Centre has been set up as many homes aren’t expected to get power until Sunday.

NSW Police advised people to check in on their vulnerable friends and neighbours.