A Sydney woman has been caught breaking lockdown after allegedly flying to Canberra – before then having guests in her hotel quarantine room and attempting to flee before police arrived.

The 24-year-old, from Paddington in Sydney’s inner city suburbs, spent Friday night in the ACT Watch House after her bizarre behaviour.

After travelling to Canberra in breach of Covid rules, the woman was identified by police as a Sydney resident when she got off the flight on Friday night about 8pm.

Subsequent checks with ACT Health confirmed she had not been granted an exemption to enter the nation’s capital.

In a statement, ACT Policing said the woman was then driven to a hotel at the airport and ordered to stay overnight at her own expense.

She was then to be escorted to a return flight on Saturday morning.

However she had other ideas – and ended up having a wild night.

At about 11.45pm on Friday, staff at the hotel where she was staying notified ACT Health that she had guests in her room and was leaving the hotel – in breach of  health directions.

As a rideshare vehicle departed with her as a passenger, police arrived at the scene. 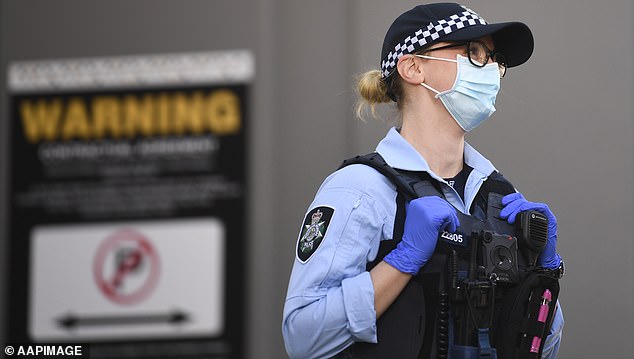 The vehicle was soon stopped by officers just after midnight in the nearby suburb Russell, where she was arrested.

Speaking to Magistrate Robert Cook from the ACT Watch House on Saturday, the woman said she was ‘really scared’ following her dramatic brush with the law.

She has not pleaded to one count of failing to comply with a direction by the chief medical officer.

The woman was granted bail and will appear in the ACT Magistrates Court on August 2.