A heated road-rage exchange has ended with a woman driving her car into the home of a stranger.

Renee Donnelly said she and her son Jack, 18, were almost at their Campbelltown home in Sydney about 5.15pm on Saturday when they were allegedly tailed and beeped at by a male driver.

Ms Donnelly said she decided to follow the man and tell him his behaviour on the road was dangerous, she told 9News.

‘I just wanted to say to him ‘just slow down’, like it’s so dangerous,’ Ms Donnelly said.

The mother claims that when she went to confront the man, he lost his cool and threatened to burn her.

‘He started swearing and carrying on and next thing he’s come out with a red petrol can – and he said ‘f— off or I’m going to burn you.”

Ms Donnelly said as she drove away, the man allegedly threw a bottle at her car.

She claims the shock of the bottle hitting the window made lose control of her Subaru Forester, which veered off the road and crashed head on into a neighbour’s house.

Footage of the dramatic crash was captured on her dashboard camera.

Ms Donnelly had to be cut free from the mangled wreckage and was taken to Campbelltown Hospital as a precaution, police said.

No one was inside the house at the time of the crash but Police said that the property sustained significant structural damage.

Ms Donnelly said the accident brought back painful memories of a crash she was in six years ago that left her paralysed on one side.

This time, she said she was grateful no one else got hurt.

‘I’m so thankful that no one that go hurt obviously,’ Ms Donnelly said.

Police are investigating the crash but have not interviewed either driver yet. 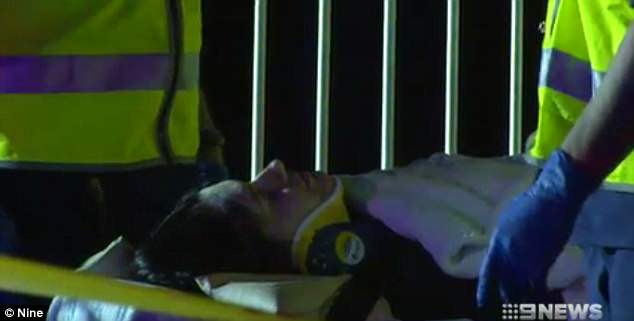 Ms Donnelly said the accident brought back painful memories of a crash she was in six years ago that left her paralysed on one side. She had to be cut from the mangled wreckage