A young veterinary nurse nearly died when she suffered chronic eczema that was triggered by hand sanitiser.

Sydney woman Lauren Rigby, who had never previously suffered skin irritation, applied sanitiser for the first time in her life last year when a shop assistant told her it was a requirement of entry under Covid rules.

‘They were saying please use hand sanitiser so I just put a little bit on and it started burning. I asked mum ”are your hands burning”? she said, ”no”,’ she told A Current Affair.

The 22-year-old soon developed eczema, which she initially dismissed as a harmless rash, but her condition rapidly deteriorated.

Within weeks her skin peeled off and her hair began to fall out. Ms Rigby said she ‘looked like a monster’.

‘I felt like everyone was looking at me. It was horrible, brutal, painful and I couldn’t even get off the lounge,’ she said.

‘I was so swollen that it if you touched my arm it would leave a dent and my skin peeled off into piles that we had to vacuum up.’

Her condition eventually worsened into erythroderma, a potentially life-threatening inflammation of the skin surface. 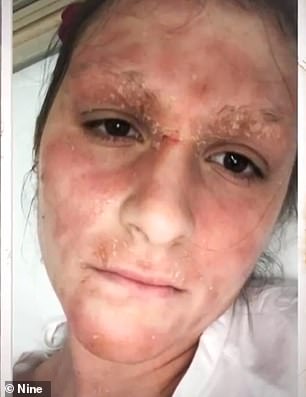 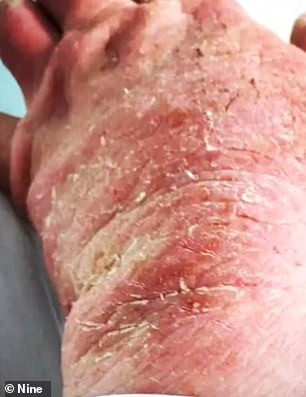 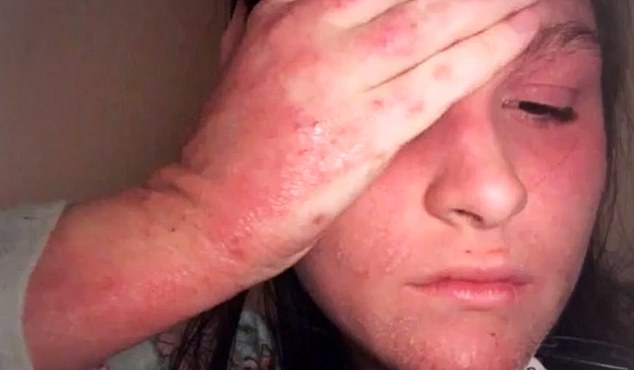 Ms Rigby said she ‘couldn’t stand it anymore’ and took herself to the emergency ward earlier this year, when she was given potentially life-saving treatment.

‘I lived through everyday hoping it would go away, hoping someone would give me medicine to make it go away, hoping that it was just a horrible nightmare that I was going to wake up from,’ she said.

She said when she was admitted to hospital she was told her condition was putting her at risk of heart failure.

‘I couldn’t regulate my temperature, my metabolism was too fast, and I was losing so much blood and fluid through my skin that I was insatiably dehydrated,’ she told the Sydney Morning Herald. 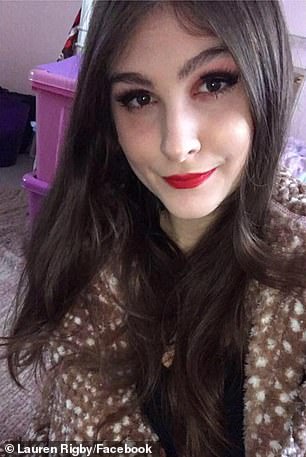 In Ms Rigby’s case, she carried a gene that made her more susceptible to the skin condition but the 22-year-old is getting better and ‘stronger’ with each day

Today, Ms Rigby has to apply a ointment regularly and bathe her skin daily.

‘How can something so tiny change my life. I’ve never used hand sanitiser this year and I’ll never use it again,’ she said.

But her condition has drastically improved – something she never expected when she once feared the condition would take her life.

Dermatologists say there has been a rapid increase in people suffering eczema as a result of frequent use of sanitisers and disinfectants during the Covid pandemic.

‘You shouldn’t suffer in silence, there are others that understand, get support, get help, get treatment.’

In Ms Rigby’s case, she carried a gene that made her more susceptible to the skin condition, but the 22-year-old is getting better and ‘stronger’ with each day.

‘It’s made me stronger because I’m on the good side of it,’ she said.

‘I never thought I would have clear skin again.’

She is hoping her story will help all Australians suffering from eczema – and those that may in the future – know they’re not alone.

‘Now I can say it’s made me stronger because I’m on the good side of it. But when I was going through it I became very insecure – I developed anxiety and depression and I didn’t think I was going to get through it,’ she said.

‘I didn’t think I would make it so I can’t believe I’m telling this story.’

Eczema can occur anywhere on the body and is not contagious

Symptoms include dry, red, itchy skin that may also feel flakey and have small bumps on it

Scratching eczema can cause further irritation

Light therapy can also be used in some cases