Sydney: Woman plunges to her death from the Queen Victoria Building

Horror as woman, 45, plunges to her death in front of shocked shoppers from the Queen Victoria Building in Sydney’s CBD in ‘self-harm incident’

A woman has died after plunging to her death at a busy shopping centre in Sydney’s CBD.

The 45-year-old fell from the upper level of the Queen Victoria Building at around 2.30pm on Wednesday.

She is understood to have plunged over a railing down a stairwell on the southern side of the building near Assam restaurant.

Police blocked off the stairs and shut down the lift between them, as well as the area near the lift entrance outside Assam.

The 45-year-old fell from the upper level of the Queen Victoria Building (pictured) at around 2.30pm on Wednesday (stock image) 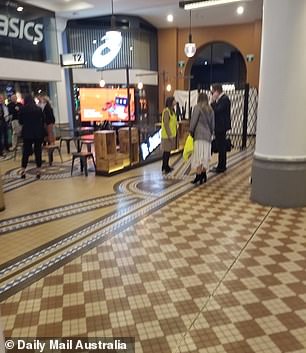 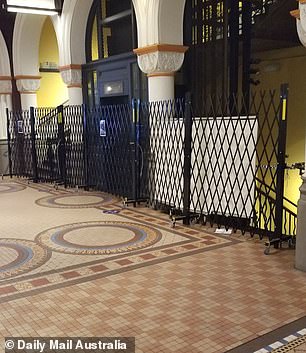 Pictured: Screens were put up following the woman’s fall in the Queen Victoria Building on Wednesday

NSW Police said the incident was not suspicious and was a ‘self-harm incident’.

‘The lower ground floor is closed to the public and there is advice to stay away from the area if possible,’ NSW Police said in a statement.

Groups of tables were arranged to obscure the bottom floor area and almost all nearby shops were closed.

Where the woman fell is secluded and not visible from QVB’s main floor.

Security were seen talking just outside the screen while police guarded the stair entrances above.

A worker from inside the Queen Victoria Building told Daily Mail Australia they heard a loud thud followed by a shout.

The source said police were quick to arrive and put up screens around the woman.

An employee at a nearby shop said he heard a loud bang but assumed something hand fallen over – until the screaming started.

‘I ran over and saw people coming out of the restaurant panicking, then I saw the body,’ he said.

‘She was already gone, lying face down with her arms out. There was blood everywhere and more coming out of her head.

‘I only saw she had blonde hair before I ran to get security.’ 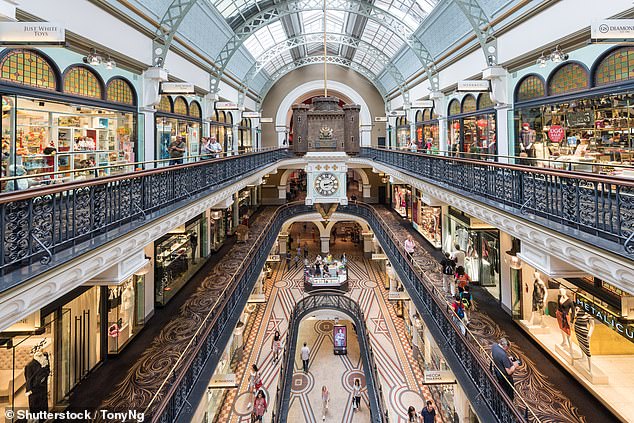