After millions of spectators took to Sydney’s streets to watch the city light up for Vivid, many of them have slammed it as another Sydney festival fail for it’s appalling crowd control.

Furious punters took to social media following the opening night to express their disappointment that the crowd management was overly heavy handed.

Some claimed the long detours meant they saw more buildings that light displays.

Many people also claimed the barriers and railings that were erected around the CBD resulted in large crowds which lead to excessive amounts of travel between each display. 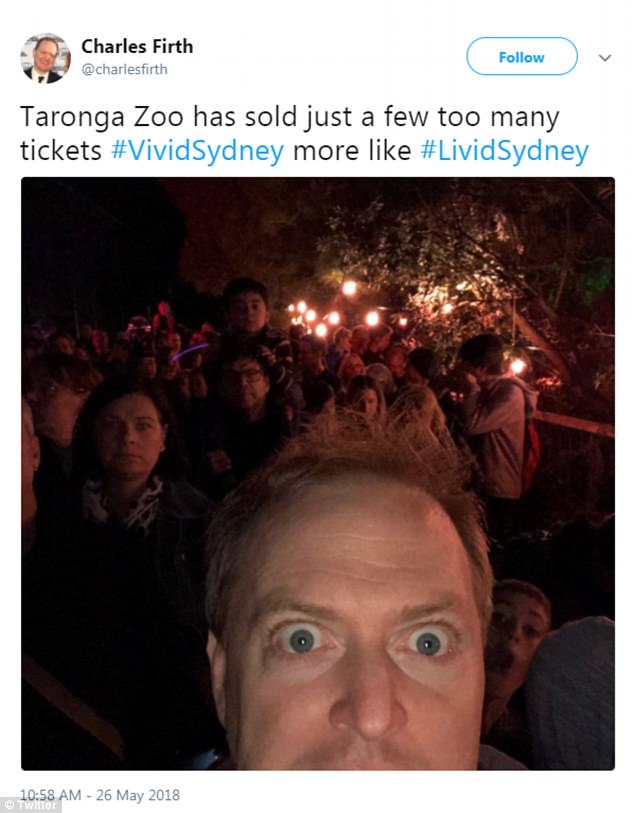 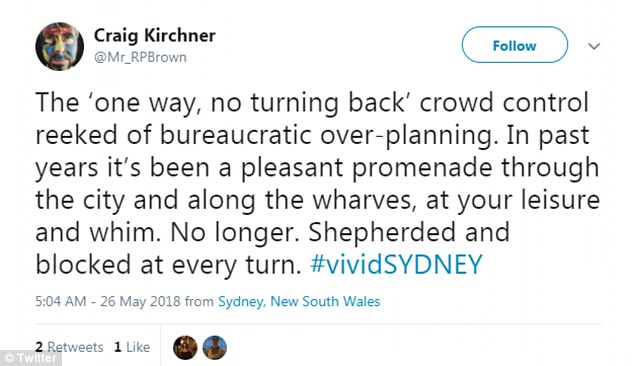 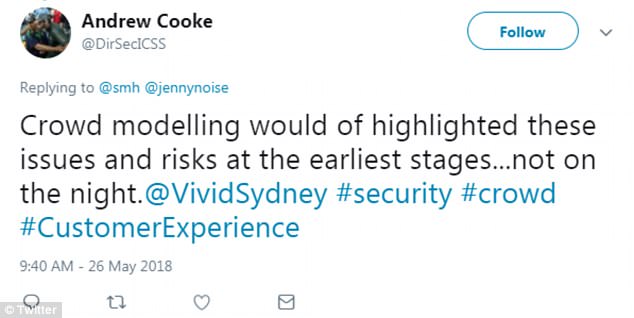 Some even claimed the crowds were too big that they left before they had even seen anything: ‘We’ve given up after 20 minutes of getting nowhere and leaving. What a joke,’ one punter wrote on twitter.

Friday was the opening night of the popular light festival which sees major landmarks across the city illuminated with vibrant projections.

More than 2million people are expected to attend the festival with upwards of 150,000 spectators on the busiest days.

Assistant Commissioner Walton warned the public before the opening night that large crows would be present.

‘During the busier nights, crowd barriers will be in place to provide safe viewing areas, and we urge people to follow directions from police and event marshals to allow for safe pedestrian movement.’

‘Sydneysiders and visitors are encouraged to utilise the Vivid Sydney and NSW Police Force social media pages to keep up-to-date on crowd movements, and important festival announcements,’ he said. 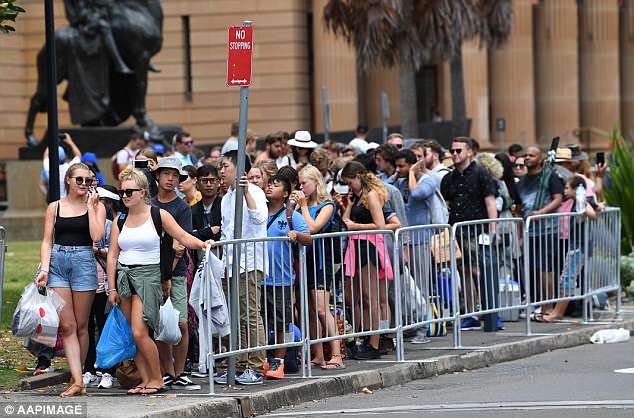 During the busy nights of the festival which runs until 16 June, crowd barriers will be in place to provide safe viewing areas 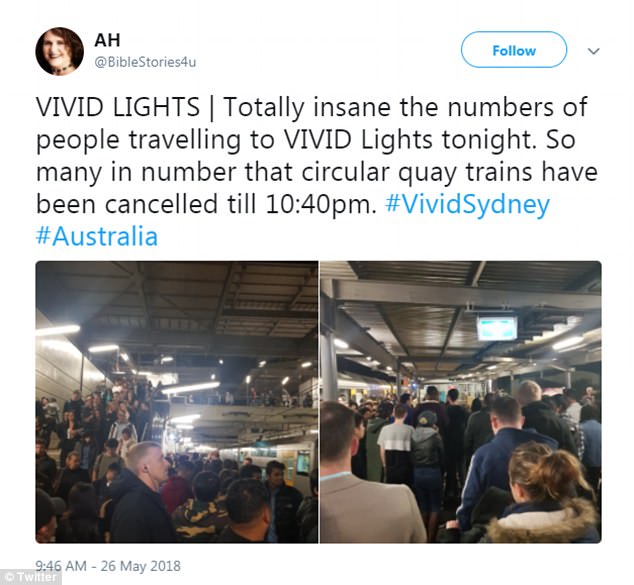 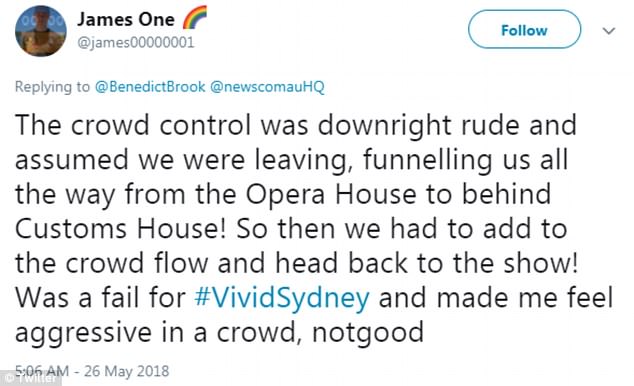 But despite these warnings thousands of pedestrians stepped out to watch the opening night and were greeted by long detours.

‘Your festival is a joke. Crowd control? Really? Let people roam the city as they wish! Like every other city in the world does. No need for it. Don’t even get me started on the security that treat you like you’re at the airport,’ one person wrote.

‘It was all going fine until half way through the night they start putting barriers throughout Circular Quay and preventing people from getting to where they want to,’ another wrote. 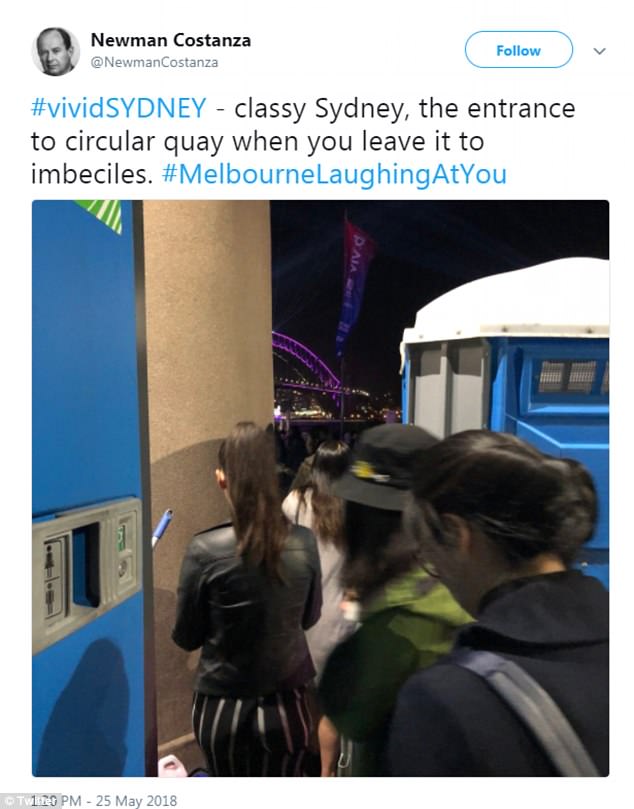 ‘Crowd modelling would of highlighted these issues and risks at the earliest stages…not on the night,’another said.

A few hit back at the detractors saying that the mosh pit atmosphere was all part of the experience.

In a statement to 9News the event organisers behind the festival, Destination NSW, said that the crown control measures would be altered in light of the complaints. 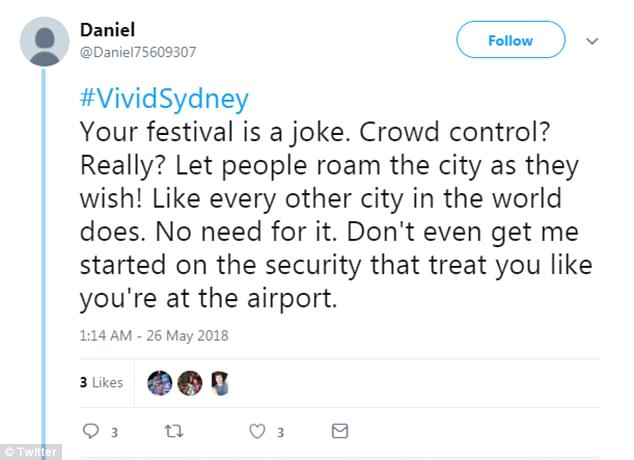 ‘Destination NSW is working closely with the NSW Police, crowd management experts and security to enhance crowd flow measures on the ground to ensure crowd safety,’ the spokeswoman said.

‘In 2018, Vivid Sydney is implementing additional, scalable measures to manage crowd flow at Circular Quay on the busiest nights to ensure all visitors have a safe and enjoyable experience.’

‘Plans will be modified for this evening where additional visitors are anticipated.’