Synagogue shooter’s neighbors knew him as forgettable and bland

Robert Bowers, 46, is charged with 29 federal crimes and faces the death penalty

The man who shot up a synagogue in a sickening attack has been described by his neighbors as an isolated loner who they often spotted carrying the duffle bag that he used to carry his AR-15 and handguns to the massacre.

Those who lived in the complex say he never had company in his apartment and and exchanged little more than an occasional wave with his neighbors.

Kerri Owens and Chris Hall, who are Bowers’ immediate neighbors, said on Sunday they were sickened by the ‘hatred’ that lurked beneath Bowers’s bland surface.

‘He said he was a truck driver and would be gone a lot and he was often away for days at a time. We had no idea about all the guns he had,’ Owens said.

Her fiancé Hall added: ‘We would see him leave with his duffle bag and assume it was just full of clothes. You never question something like that.’

Now, the couple are left with the chilling possibility that the last time he left with that duffle bag it was holding the guns he used to kill 11 worshippers and injure four police officers at the Tree of Life Synagogue on Saturday.

Authorities have confirmed that Bowers had 21 guns registered in his name and committed the atrocity with an AR-15 style assault rifle and three handguns. 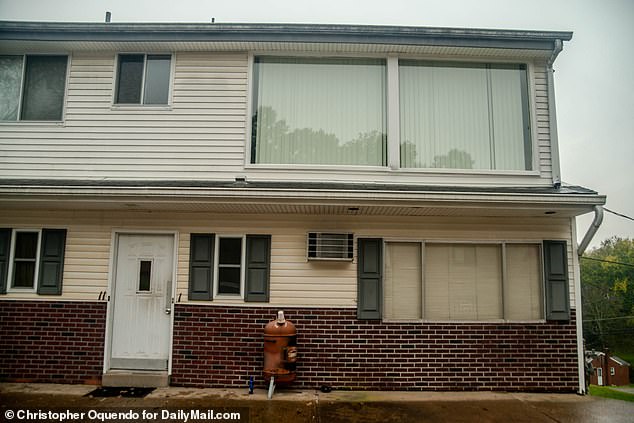 Bowers lives in this ground-floor unit in this apartment complex in Baldwin, Pennsylvania. The flags, variations on the American flag and a Steelers banner, are hung from another unit 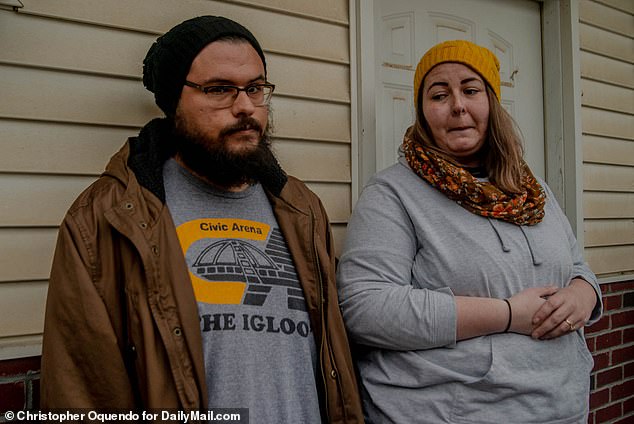 Kerri Owens and Chris Hall, who are Bowers’ immediate neighbors, said on Sunday that he was an isolated loner and they were  sickened by the ‘hatred’ that lurked beneath his bland surface 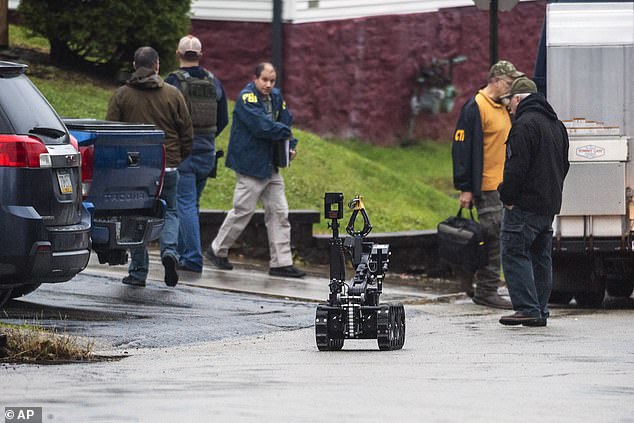 A bomb robot was brought in and the building was evacuated amid fears that Bowers had rigged his unit with an explosive. The search proceeded without incident however 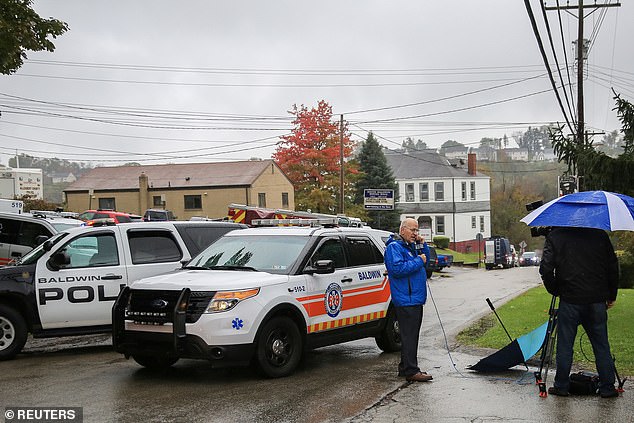 Police vehicles block off the road near the home of Pittsburgh synagogue shooting suspect Robert Bowers’ home in Baldwin Baldwin borough, a suburb of Pittsburgh

‘I’ve been up all night wracking my brain for any signs or clues but he kept all that hatred online and, unfortunately, for when he had a gun in his hand,’ Hall said.

They recalled Bowers keeping his car, an unremarkable blue sedan, clean and free of any stickers.

‘It’s just so disturbing that someone so normal could have so much hate. You think you know your neighbor but this just shows how wrong you can be,’ Owens said.

Late on Saturday, police and FBI agents were seen raiding the gunman’s apartment, which is less than 30 minutes from the synagogue in Pittsburgh.

Within hours of the attack, police evacuated the low income apartment complex where Bowers lived amid fears his ground-floor unit may be rigged with explosives. 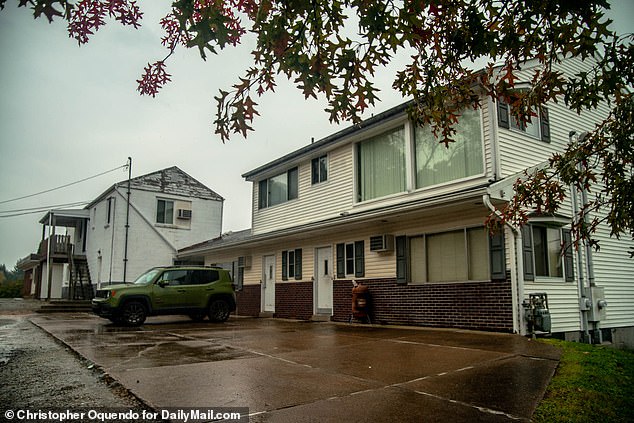 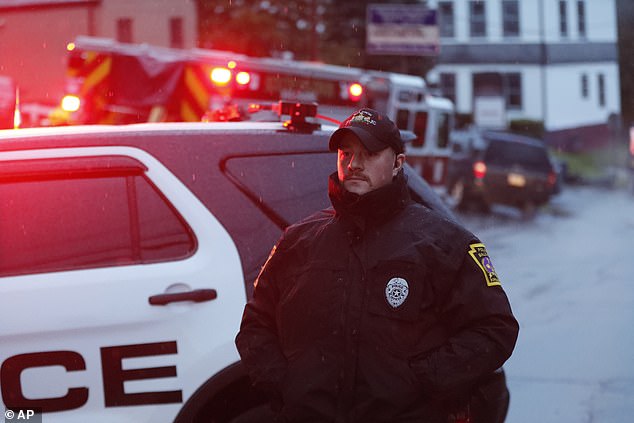 A Baldwin policeman helps block off the area around the McAnulty Acres apartment complex, as authorities continue their investigation of a shooting in a Pittsburgh synagogue 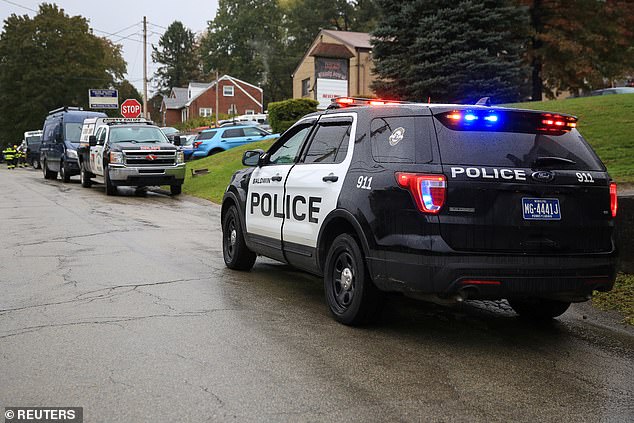 Police vehicles are deployed near the vicinity of the home of Pittsburgh synagogue shooting suspect Robert Bowers’ home in Baldwin borough, a suburb of Pittsburgh

‘It’s very unsettling knowing all that stuff that was used to hurt those people was on the other side of the wall,’ Owens said. ‘I didn’t see any signs. I can’t even comprehend that he had that much hate and seemed so normal.’

Hall said he felt ‘awful’, adding: ‘I didn’t know that type of caliber of person could be living right next door without any clue of what any motive he would have, and who could do something like this.’

According to former neighbors from when Bowers lived at a previous address, he kept to himself and would sometimes stay at home for days at a stretch.

Linda Lohr, a retired paralegal, told the Pittsburgh Post-Gazette she was shocked, saying that although he was quiet, he was also the kind of neighbor who would call to let her know if she left the garage door open.

Bowers has no known criminal record, according to the paper, but had on occasion had ‘contacts’ with local police over non-criminal issues.

He was given a traffic citation in 2015 for operating a vehicle without registration plates, and was subject to a debt claim by Colonial Credit Corporation for $2,065 in 2005. 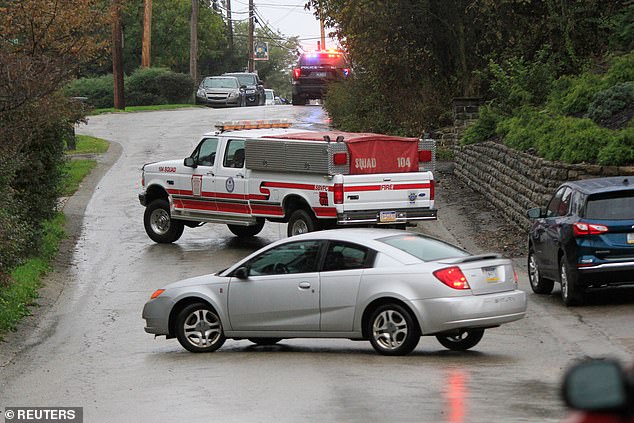 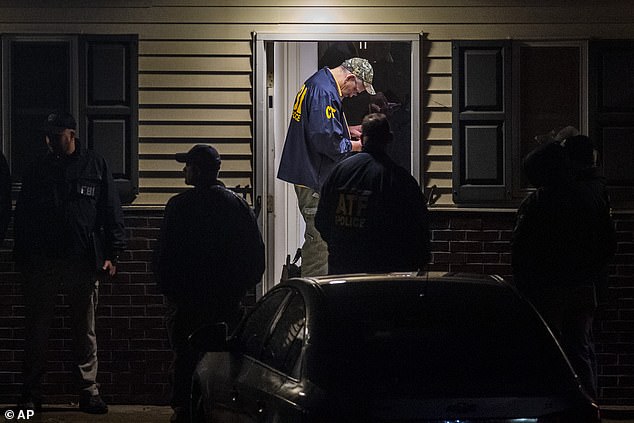 Licensed to carry firearms, he had at least 21 firearms registered to his name, according to the .

He also professed his love for his ‘family’ of Glock pistols in a post on Gab, where he outlined their technical characteristics.

Three Glocks were recovered from Bowers after his attack, as well as an AR-15 semi-automatic rifle favored in other recent mass shootings in the US.

Bowers remained hospitalized Sunday, after suffering multiple injuries during a shootout with police. Officials said he had been operated on, and was in a stable condition.

‘I’m in shock. I can’t believe that happened,’ said Terry Choate, a retired government contractor who told the Post-Gazette he knew Bowers for nearly the suspect’s entire life. ‘I can’t believe he did that. I’d like to know what set him off.’