‘We’ll announce the complete victory over ISIS in a week’: Syrian forces say Islamic State are days from obliteration as mass grave filled with terror group’s victims is uncovered

By Reuters and Tim Stickings For Mailonline

Syrian forces have predicted complete victory over ISIS within days, as they uncovered a mass grave of decapitated bodies in the terror group’s former territory.

The Syrian Democratic Forces, a Kurdish-led militia backed by Washington, are on the brink of ejecting ISIS from its last holdout in Baghouz, near the Iraqi border.

The SDF’s commander-in-chief Mazloum Kobani said in a video released today: ‘We will announce the complete victory over Daesh [ISIS] in a week.’

Today footage emerged appearing to show a mass grave which was discovered a week ago and is still being excavated.

Search: A woman evacuated from the last ISIS holdout in Baghouz is checked by a Syrian Democratic Forces inspector at a screening area in eastern Syria on Wednesday

It was not clear when the people had been killed but many of them had been decapitated, according to the SDF.

Syrian forces are seeking to confirm whether the bodies were those of Yazidis enslaved by ISIS, an SDF commander said.

Thousands of members of the minority Yazidi sect from Iraq were forced into sexual slavery by IS when they surged across the border in 2014 and seized swathes of territory.

More than 3,000 other Yazidis were killed in an onslaught the United Nations later described as genocidal, which prompted the first U.S. air strikes against IS.

The SDF also announced on Thursday it had freed 24 of its fighters from the jihadist group. 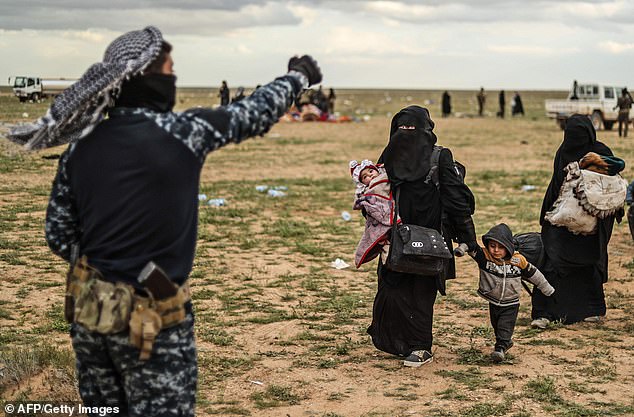 Escaped: A woman evacuated from Baghouz holds a child in her arms and leads another one along with her left hand at a screening area in Deir Ezzor, eastern Syria 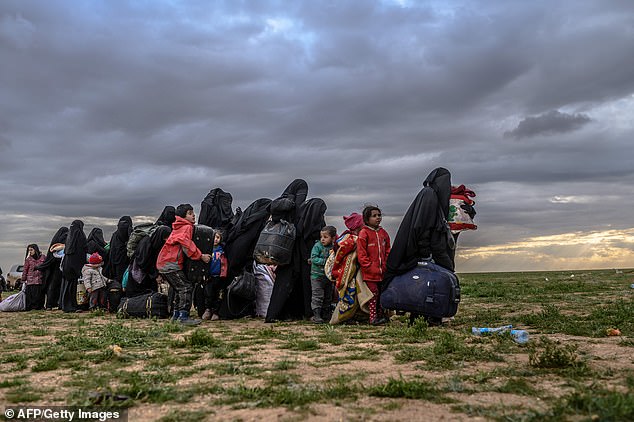 Long line: Women and children wait to be searched by members of the Kurdish-led Syrian Democratic Forces, whose leaders have said they expect to defeat ISIS within a week 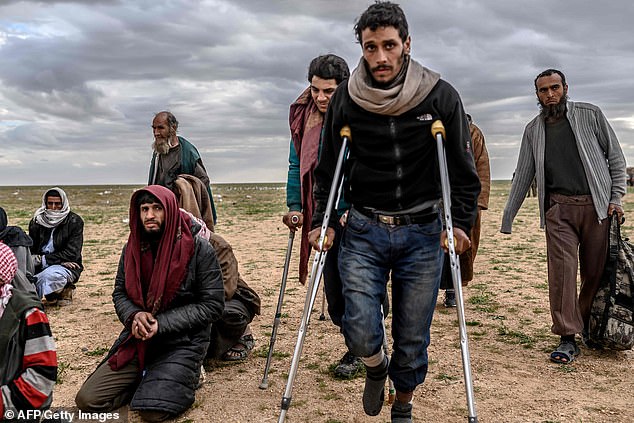 Suspects: Men suspected of belonging to the Islamic State – one of them on crutches – wait to be searched by members of the Kurdish-led militia

The operation to wipe out the last vestiges of ISIS’s territorial control has been held up as the SDF seeks to evacuate thousands of civilians.

The ISIS enclave at Baghouz, a tiny area on the eastern bank of the Euphrates River, is the last populated territory held by the jihadists.

Though the fall of Baghouz will mark a milestone in the campaign against IS, the group is still seen as a security threat.

They will use guerrilla tactics and still hold some territory in a remote area west of the Euphrates River.

Some 40,000 people have crossed from the jihadists’ diminishing territory in the last three months as the U.S.-backed SDF sought to finish off the group. 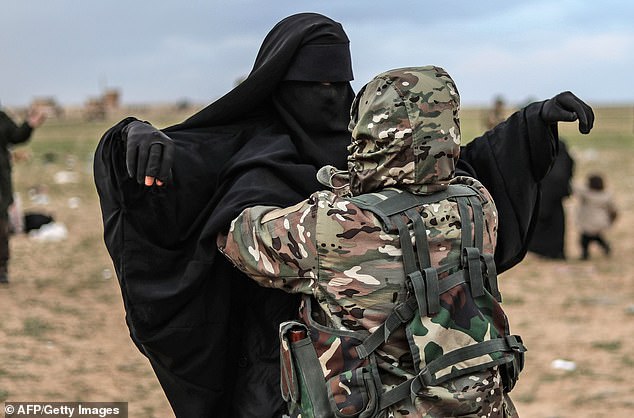 Inspection: An SDF member carries out a search on a woman evacuated from Baghouz, the terror group’s last remaining populated territory in Syria 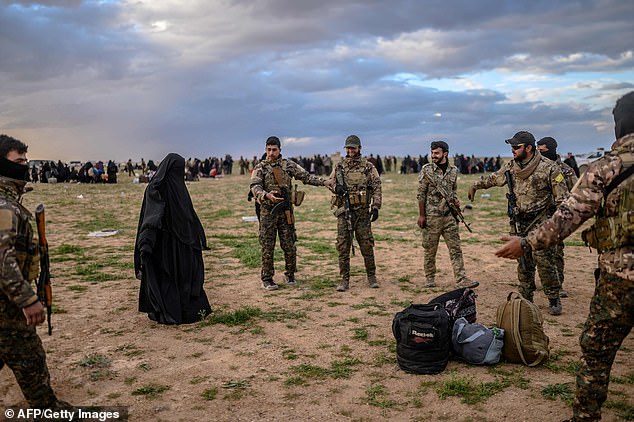 Moving on: A woman takes her bags back after being searched by members of the Kurdish-led Syrian Democratic Forces in Syria 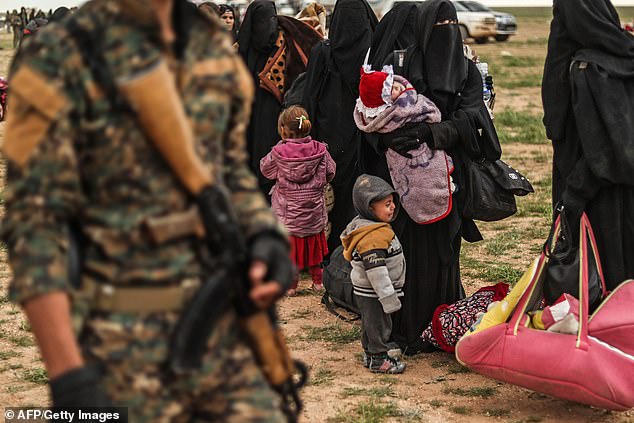 Helpless: Young children join their mothers at a screening area in eastern Syria on Wednesday

The numbers of people, who are still pouring out of Baghouz, have surpassed initial estimates.

Afrin said many of the people coming out of Baghouz had been underground in caves and tunnels.

The SDF has said it wants to evacuate civilians inside Baghouz before storming it or forcing the surrender of the remaining jihadists, who the SDF has said are mostly foreigners.

The U.S.-led coalition said Baghouz had been ‘more crowded with both civilians and fighters than expected’.

‘The overflow during the lull in battle has been difficult for the SDF and they have responded to everything well …,’ said Colonel Sean Ryan, the coalition spokesman.