Syrian President Bashar al-Assad’s forces were responsible for a deadly sarin gas attack on the rebel-held town of Khan Sheikhun that killed scores of people, a UN investigative panel has said.

The joint UN-Organisation for the Prohibition of Chemical Weapons (OPCW) panel said in a much-awaited report that most of the evidence collected supported the ‘prevailing scenario’ that the ‘sarin was delivered via an aerial bomb that was dropped by an airplane.’

The ‘panel is confident that the Syrian Arab Republic is responsible for the release of sarin at Khan Sheikhun on 4 April 2017,’ said the confidential report to the UN Security Council, which was obtained AFP.

In response, Boris Johnson attacked Russia for shutting down investigations into chemical weapons attacks in Syria after it blocked an independent probe.

A UN investigative panel concluded that the Syrian regime was responsible for the sarin gas attack on Khan Sheikhun, a rebel-held town in the northwestern Syrian Idlib province

Moscow, which backs Bashar Assad’s brutal regime, used its veto at the United Nations to stop work to identify the perpetrators of atrocities being extended.

The move suggests the Syrian government ‘has something to hide’ and risks letting the attackers ‘off the hook’, the Foreign Secretary said.

More than 87 people died in the nerve gas attack on the town in Syria’s northwestern Idlib province.

Horrific images from the immediate aftermath of the attack drew global outrage and prompted the United States to fire cruise missiles at a Syrian air base from which the West says the assault was launched.

Syria ally Russia maintains that the sarin attack was most likely caused by a bomb set off directly on the ground, not by a Syrian air strike.

But expert analysis of photographs and videos of the site where the sarin was released found a crater caused by a ‘relatively large bomb’ that was ‘dropped from medium or high altitude’, the report said.

An in-depth laboratory study of the sarin released in Khan Sheikhun found that it had most likely been made from a precursor from the government’s chemical stockpile.

Syria’s government has maintained it no longer possesses chemical weapons after a 2013 agreement under which it pledged to surrender them.

The report also found that Islamic State group militants used mustard gas in a separate attack on the town of Um Hosh in northern Aleppo region in September 2016.

The panel known as the Joint Investigative Mechanism (JIM) received French and US intelligence that a Syrian air force Su-22 took off from Shayrat airbase and launched up to six attacks on Khan Sheikhun.

The expert investigators interviewed a Syrian pilot of an Su-22 who denied using chemical weapons and insisted his mission on April 4 was at least seven kilometers (four miles) away from Khan Sheikhun. 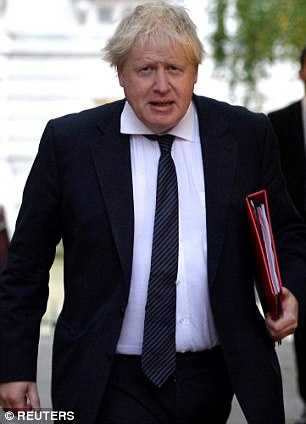 In response, Boris Johnson attacked Russia for shutting down investigations into chemical weapons attacks in Syria after it blocked an independent probe

The panel said it was unable to confirm that an Su-22 operating from Shayrat air base launched the attack, but said that Syrian aircraft were in the ‘immediate vicinity’ of Khan Sheikhun when it took place.

In an interview with AFP in April, Assad had described any suggestion that chemical weapons had been used by his forces as ‘100 percent fabrication.’

The report was released two days after Russia vetoed a US-drafted resolution that would have extended by a year the investigation of who is behind chemical weapons attacks in Syria.

Russia said it wanted to study the report on Khan Sheikhun before deciding on the extension of the panel that it helped set up in 2015 jointly with the United States.

US Ambassador Nikki Haley welcomed the findings and said the Security Council must send a ‘clear message’ that the use of chemical weapons will not be tolerated.

‘Ignoring the overwhelming amount of evidence in this case shows a purposeful disregard for widely agreed international norms,’ Haley said in a statement.

‘The Security Council must send a clear message that the use of chemical weapons by anyone will not be tolerated, and must fully support the work of the impartial investigators.’

‘Countries that fail to do so are no better than the dictators or terrorists who use these terrible weapons,’ she added.

‘I call on Russia to stop covering up for its abhorrent ally and keep its own commitment to ensure that chemical weapons are never used again,’ he said.

After the panel found that Syrian forces had launched chlorine attacks on opposition villages in 2014 and 2015, the United States, Britain and France pushed for sanctions, but Russia and China vetoed that resolution.