Syrian girl, 5, clings to her baby sister’s T-shirt as she dangles over edge of their bombed home

A five-year-old girl tried to save her baby sister by clinging onto her T-shirt as she dangled from a destroyed building in Syria moments before she was killed.

Riham was seen clutching her infant sister’s clothes in a desperate bid to stop her falling from the edge of their bombed family home.

Her other sister was also trapped under the rubble of the collapsed building after an airstrike in Ariha, western Idlib, by either Russian or Syrian government forces yesterday.

Father Amjad al-Abdullah was also seen watching in horror with his head in his hands as he scrambled to save his daughters.

Seven-month-old Tuqa fell from the ledge and was left in a critical condition in an intensive care unit while Riham later died in hospital. 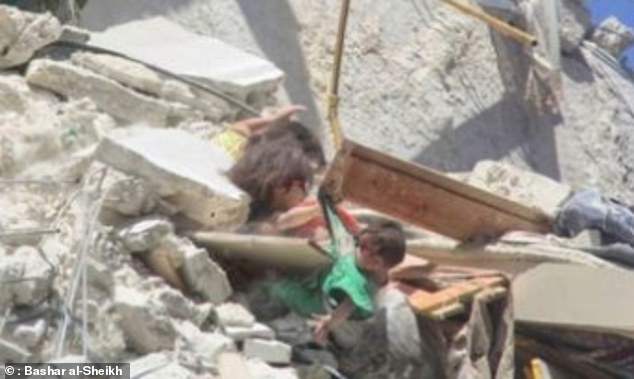 Five-year-old Riham was seen clinging on top her seven-month-old sister Tuqa as she dangled from the edge of their bombed home in Ariha, western Idlib

Moments after dramatic footage of the rescue attempt was filmed the building collapsed.

The girl’s were pulled from the ruins, but their mother Asmaa Naqouhl was killed at the scene and her other daughter is still being treated for her injuries.

Syria Civil Defence, the volunteer first responders known as the White Helmets, said they rescued another young man from the rubble of the house.

Footage of the Abdullah rushing to save his family went viral on social media after being posted by Syrian network SY-24.

Photographer Bashar al Sheikh, a from Kafr Nabudah, was among the first on the scene after the attack and captured the dramatic moment.

Syrian government forces, backed by its ally Russia, launched an offensive in April to retake strategic areas around Idlib and northern Hama as part of its bid to push the rebels from the country. 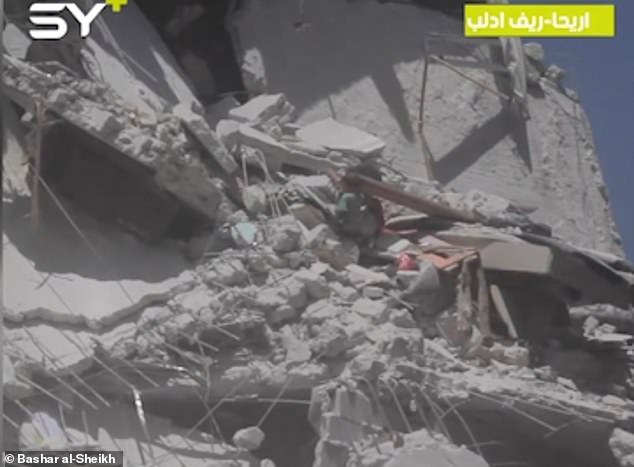 Tuqa eventually fell from the damaged building and it collapsed, killing Riham and her mother. Tuqa miraculously survived 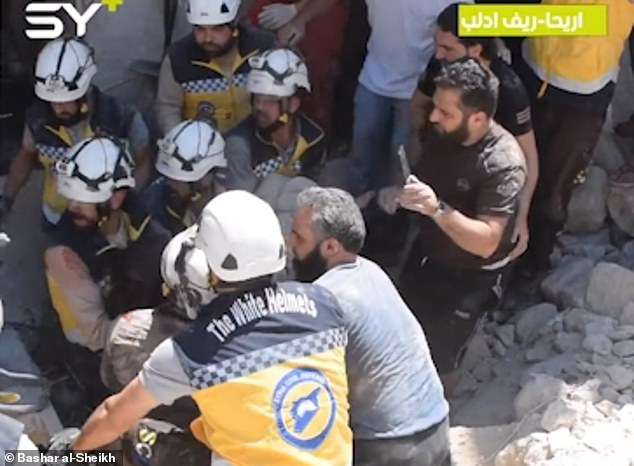 The family were pulled from the rubble after the building collapsed. Mother Asmaa Naqouhl died as did her daughter Riham

The Syrian Network for Human Rights estimates that more than 600 civilians have been killed by Russian or Assad regime strikes since April.

On Wednesday, 59 civilians, including five children and more than 100 injured, died in air strikes on at least three areas of Idlib province on Monday, according to the UN.

The province is one of the last rebel-held areas in Syria.

Mark Cutts, the UN’s deputy regional humanitarian coordinator for the Syria crisis said: ‘Some of the dead bodies were torn into pieces or burnt beyond recognition.

‘Many of the victims were women and children, some of them suffering the most horrific injuries.

‘Rescue workers have been working all day pulling people out from under the rubble. Many remain buried. The search for survivors was continuing as darkness fell.’

Russian air strikes had killed 10 people from one family, including three children, in Khan-Sheikun, according to the UK-based monitoring group Syrian Observatory for Human Rights.

The market town of Maaret al-Numan suffered some of the bloodiest strikes when around 40 people, including eight women and five children, were killed in blasts. 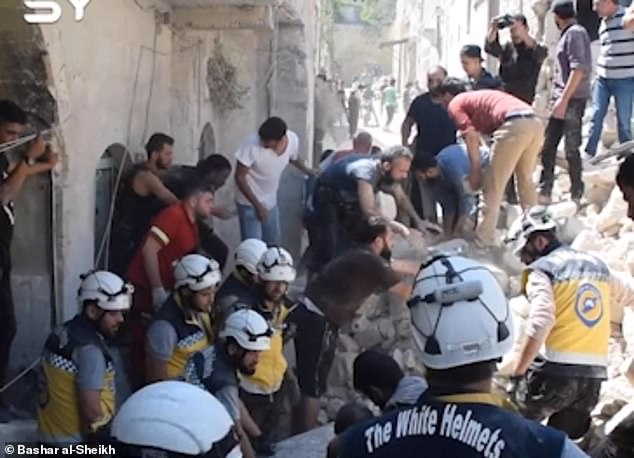 Two of the young girls were taken to hospital for treatment. More than 59 civilians were killed and 100 injured during separate airstrikes on Monday