In an interview with pro-Putin news channel Russia Today, the Syrian dictator also claimed he will recover areas held by U.S.-backed militia ‘within a year’.

He also claimed that direct conflict between Russian military and U.S. forces had been ‘close’ in Syria, and that it had only been avoided thanks to Putin’s leadership.

Big talk: Syrian President Bashar al-Assad has said U.S. forces should learn the lesson of Iraq and leave the country, and that he would recover rebel-held areas of Syria ‘within a year’

‘We were close to have direct conflict between the Russian forces and the American forces,’ Assad said in English in an interview with Russia Today, aired Thursday.

Assad said work had begun on negotiations with the Syrian Democratic Forces (SDF), a Kurdish dominated militia alliance that controls parts of northern and eastern Syria where U.S. forces are stationed.

‘This is the first option. If not, we’re going to resort to… liberating those areas by force,’ he said, adding ‘the Americans should leave, somehow they’re going to leave’.

‘They came to Iraq with no legal basis, and look what happened to them. They have to learn the lesson. Iraq is no exception, and Syria is no exception. People will not accept foreigners in this region anymore,’ he said. 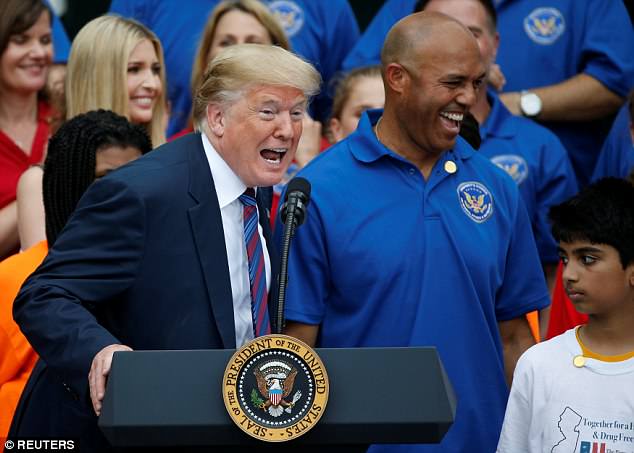 Trading insults: Responding to U.S. President Donald Trump’s description of him as ‘Animal Assad’, the Syrian dictator told pro-Putin website Russia Today: ‘What you say is what you are’.

Responding to Trump’s description of him as ‘Animal Assad’, the Syrian leader said: ‘What you say is what you are’.

Trump called Assad an animal after a suspected poison gas attack on a rebel-held town near Damascus in April.

Assad reiterated the government’s denial that it carried out the attack in the eastern Ghouta town of Douma, saying that the government did not have chemical weapons and it would not have been in its interest to carry out such a strike.

He claimed it had been a desperate attempt among the Western allies to drum up support for subsequent missile strikes in Syria.

The Douma attack triggered missile strikes on Syria by the United States, Britain and France which they said targeted Assad’s chemical weapons programme.

Assad has recovered swathes of Syrian territory with military backing from Russia and Iran and is now militarily unassailable in the conflict that began in 2011. 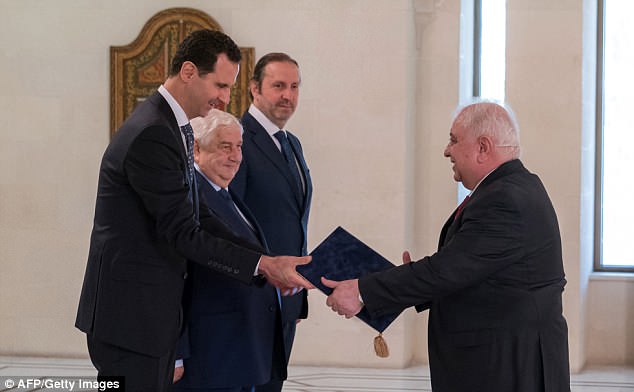 Large areas however remain outside his control at the borders with Iraq, Turkey and Jordan. These include the SDF-held parts of the north and east, and chunks of territory held by rebel forces in the northwest and southwest.

Israel, which is deeply alarmed by Tehran’s influence in Syria, earlier this month said it destroyed dozens of Iranian military sites in Syria, after Iranian forces fired rockets at Israeli-held territory for the first time.

Iran-backed militias including Lebanon’s Hezbollah have played a big role in support of Assad during the conflict. Iran’s Revolutionary Guards have also deployed in the country.

Assad said Iran’s presence in Syria was limited to officers who were assisting the Syrian army. Assad, apparently referring to the May 10 attack, by Israel said ‘we had tens of Syrian martyrs and wounded soldiers, not a single Iranian’ casualty.

Asked if there was anything Syria could do to stop Israeli air strikes, Assad said: ‘The only option is to improve our air defence, this is the only thing we can do, and we are doing that’.

He said that Syria’s air defences were now much stronger than before thanks to Russia.