Szymon Marciniak, who takes charge of Sunday’s World Cup final, says he only got into refereeing because he was once sent off for abusing an official during his own playing days.

The 41-year-old Pole recalls how he reacted badly in his younger days after being tackled from behind.

‘I was quite a promising player according to my coaches but I got sent me off once when I was fouled from behind. I started arguing, and wanted a red card for the opponent but the referee didn’t agree with me.

Hew said: ‘for this, dissent, yellow card for you, Marciniak. And, I was like: ‘What are you saying to me?’ I was fouled from behind and my Achilles was almost broken, and you give me a yellow card. So I started again and he gave me a second yellow card.

So then I got furious and said, ‘You are the worst referee I have ever seen.’ Of course, I used worse words than that.

‘We spoke after the game, and he told me: ‘If you think this is easy work, you can go and try. You will see.’ And I was thinking, why not? I have to prove that he is really poor and I will be better. So, immediately I went on a course.’

Marciniak rose through the ranks quickly, and was in charge when Lionel Messi’s Barcelona were thrashed 4-0 at Paris Saint-Germain in 2017.

As one of UEFA’s leading referees he was on course to officiate during Euro 2020 but had to withdraw because of illness, suffering from a heart condition.

‘I had a very difficult time for the last year and a half. I had Tachycardia, a heart illness. In the beginning, it was very difficult for me and I had to stop. 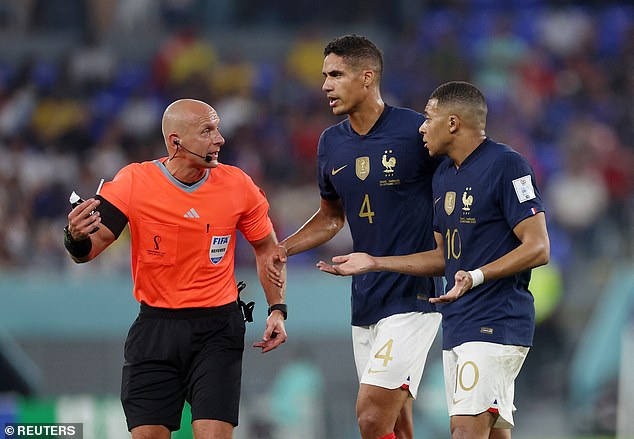 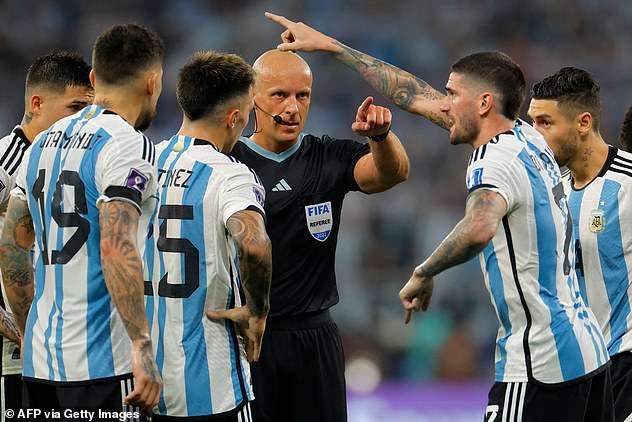 ‘I missed the European Championship, which for a referee at their best age, is a terrible feeling. But sometimes I think life takes something away from us in order to give you back double happiness. I am a great example of this because I regret it a lot. Only I, and my team, know how difficult a time it was for me. But, now, life has given it back to me and I cannot stop smiling because it’s a great feeling.’

With his shaven head and piercing stare, he resembles Pierluigi Collin, and his friends joke that Italy’s most famous Italian referee is Marciniak’s godfather. ‘I met Collina, who was the boss at the time at UEFA, and my friends said: ‘Haha, you look similar – he’s like your godfather.’

‘I’m proud to make him proud because I know that from the beginning he believed in me. He was the second observer who watched me in the second [round of qualifying in the] Champions League games, so I know that’s also why it’s very important for me to make those people very happy.’ 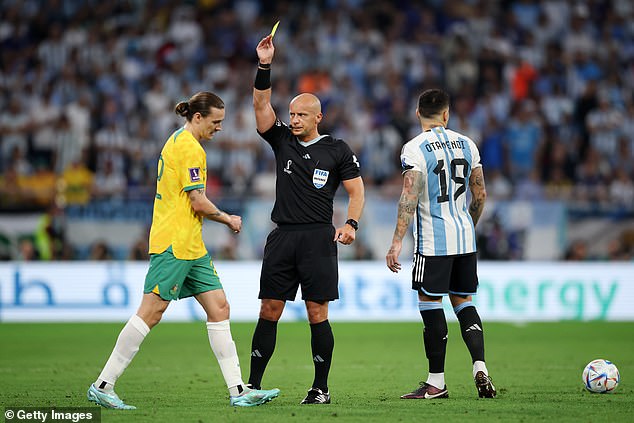 One of his assistants has a family connection with Argentina in a World Cup final – Tomasz Listkiewicz’s father was a linesman when West Germany beat Diego Maradona’s side in a stormy 1990 final, with two Argentinian’s sent off.

‘It makes us proud because Tomasz’s father was once great international referee, and was a linesman in the big final. So after, 22 years, we have another one.’

And he expects a fast and intense game this time, with both Argentina and France full of energy at the first-ever mid-winter World Cup. ‘Now the players are fresh, they want to win. You see the fire in their eyes.

‘We expect a very fast game; this is the final, nobody wants to concede a goal, so I expect maybe at the beginning, being careful a little bit. But they have such big names, such big stars, everything can happen. So concentration, concentration, once more concentration. There cannot be any relaxing, even for one second. This is my task for the game.’