The government of Taiwan has banned the popular video conferencing tool Zoom from being used for all official state business.

In a statement issued by Taiwan’s cabinet, the government directed all of its agencies and workers to ‘not use products with security concerns, like Zoom.’

Instead, the government suggested agencies that needed video conferencing software for remote workers use products from Google of Microsoft instead.

The government typically encourages its workers to use software that has been developed locally, but due to ‘special circumstances’ imposed by the COVID-19 pandemic, software developed outside of Taiwan will be acceptable.

Taiwan’s ministry of education followed up shortly after by announcing they would be ban Zoom from being used for virtual classroom sessions in all of the country’s schools, according to a report from the CBC.

‘The security aspects of Zoom have not been assessed by the Canadian Centre for Cyber Security, and it has not been approved for any government discussions that require secure communications,’ Ryan Foreman from Canada’s Communications Security Establishment said.

The app has also been banned by New York City officials, who had previously allowed schools to use it for virtual classes. 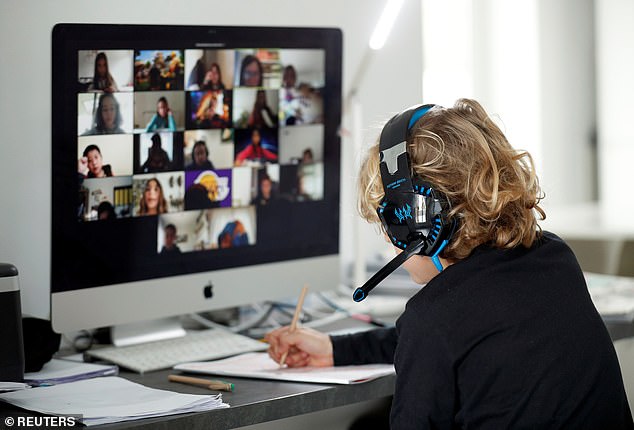 Zoom has also been banned from official use by the Canadian government, the Australian Defence Force, the New York City Department of Education and more

The Australian Defence Force also banned the tool, citing concerns that ‘hostile foreign actors’ could use it to gain access to valuable defense information after a comedian hacked into an air force meeting as part of an online comedy sketch.

WHAT SECURITY MEASURES DOES ZOOM HAVE?

Users of the Zoom video-conferencing app are given a code to enter the meeting ‘room’. This number of between nine and 11 digits can then be shared with those the meeting host wish to join them.

But things can get out of hand if people share these codes online on social media, allowing something called ‘zoombombing’, where mass groups of people can join a meeting as a joke or to disrupt it if they receive the code.

However, there are additional steps that can be taken to block this.

Private groups can also be set up so that they require an additional password to join.

This means that even if the room code is shared accidentally, as in today’s case, it is not possible to join the room.

Additionally, a meeting can be set up so that no-one can enter before the  organiser or chair.

This means pranksters cannot ‘sit’ in a room waiting for others to log in.

The chair of the meeting has the power to kick uninvited guests out of the room once they are in it.

Zoom had initially seen huge user growth as the COVID-19 pandemic drove many companies to shift to telecommuting, seeing more than 200 million daily users at its peak in March.

Since then, reports have confirmed a range of security flaws with the software that’s made it a target for hackers.

Over the last 10 days, the company has lost close to a third of its market value as reports of security flaws have circulated.

In a blog post on the company site, Zoom CEO and founder Eric Yuan apologized for the security issues and admitted that trying to adapt to the enormous scale of demand has been challenging for the company.

‘We also feel an immense responsibility,’ he wrote. ‘Usage of Zoom has ballooned overnight – far surpassing what we expected when we first announced our desire to help in late February.’

Yuan remained upbeat, however, and said the company would use its current difficulties to make longterm improvements.

‘We appreciate the scrutiny and questions we have been getting – about how the service works, about our infrastructure and capacity, and about our privacy and security policies,’ Yuan wrote.

‘These are the questions that will make Zoom better, both as a company and for all its users.

The company says it will suspend development on all new features and focus exclusively on solving its security issues.