This is the distressing moment a dog groomer beat his own poodle puppy to death with a sandal to stop it from barking.

The animal worker, named in reports only by his surname Pan, carried out the distressing attack at a salon in Taipei City, Taiwan, in August last year.

Pan is now facing two years in jail and a £50,000 fine for the abuse, and ahead of his sentencing CCTV was released of the attack.

The dog groomer, identified only by his surname Pan, admitted beating the dog to death with his sandal to stop it from barking after he ‘lost control’

The footage shows Pan repeatedly hitting the dog on the face with the sandal.

According to the pet salon owner, surnamed Chen, 36-year-old Pan was hired as the business’s pet groomer in 2016.

Chen said she paid Pan almost £900 a month for his services and he appeared ‘completely normal’ until the weeks leading up to the incident. 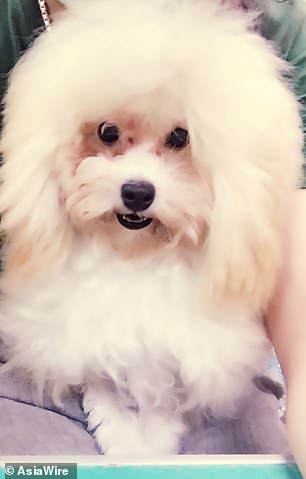 But Chen said Pan’s behaviour changed and that he took money from clients without her knowledge in the lead-up to the attack.

Then, in August, he yanked his pet poodle out of its cage in front of shocked staff members and began beating it.

When his colleagues protested and tried to stop him, he told them:  ‘It was too noisy. It wouldn’t stop barking the entire way here.’

When his coworkers tried to check on the dog, Pan added: ‘There’s no need to check. I’ve already beaten it to death.’

Questioned by police, Pan said he ‘lost control’ of his emotions.

The animal rights authority says Pan faces jail time of up to two years and a maximum fine of £50,000 for the abuse.

The office noted that the severity of his punishment would not be affected by his profession as a dog groomer or the fact that he was the dog’s legal owner. 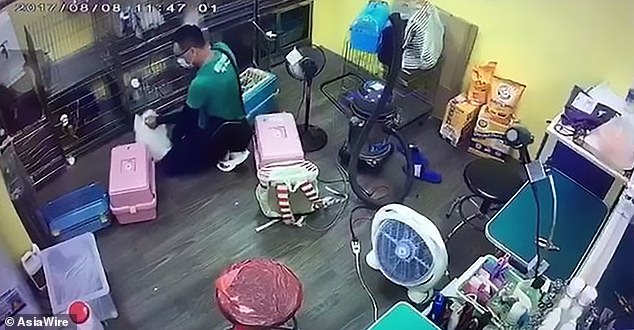 CCTV has been released of the attack as Pan faces the prospect of spending two years in jail and being fined £50,000 over the abuse